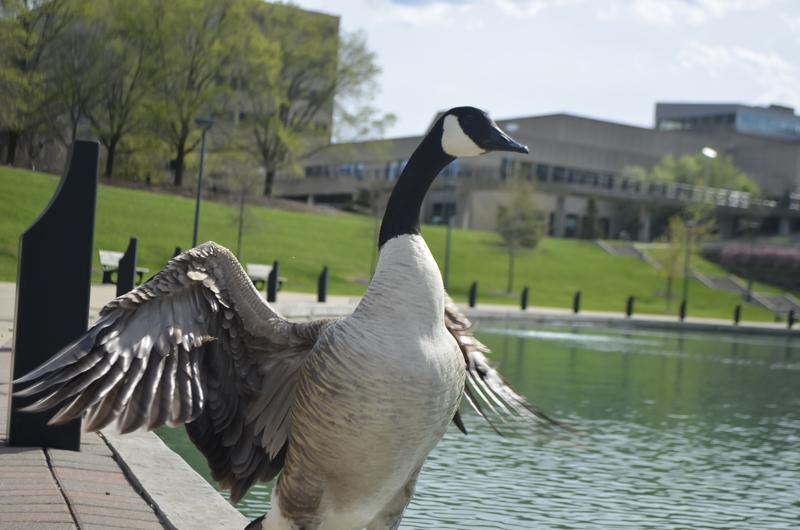 Geese can be seen strolling through campus enjoying the weather much like students do. Whether the geese are a problem or not to NKU, staff has different opinions.

Geese, ducks, raccoons, possums, skunks and various other rodents can be found at the university because of its placement in the wooded area. Humane traps are set for these animals. They are then released at farms of the staff, according to Larry Blake, assistant vice president of Facilities Management.

“We don’t kill anything,” Blake said.

However, because of their prominence the geese are the species trying to be controlled. The geese were problematic even before the area around Loch Norse was renovated. A green area, against what is now known as the Math Education and Psychology Center, gave way to sidewalks and seating. 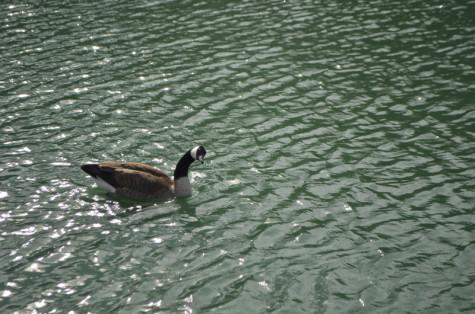 A year after renovating the lake, Blake knew more were coming.

“Our only solution was to go down there with hoses and wash them off. People were irritated, they were down there eating lunch and somebody’s spraying the sidewalk and washing stuff down into the lake. Then we started realizing we have a problem with the lake, with the fecal material being in the lake from all the geese,” Blake said.

“The concern was some student decides to jump in the lake, falls in the lake, they’re in an environment that is very unhealthy,” Blake said.

Health is Blake’s number one priority as bird droppings create a health risk to humans.

“There is certainly a health risk with any kind of a bird roosting or nesting or staying in the area,” Blake said.

Around $10,000 is spent in order to make Loch Norse healthy and keep the algae growth down. Now that the geese are under control, this is not hard to deal with, according to Blake. Therefore, NKU wants to prevent dumping chemicals and creating environmental havoc by going to the source of concern. That is when the numerous attempts to oust the birds from campus started. From fake wolves, an owl and snake to cannons with speakers that sporadically boom.

“I say go for it,” Walters said. “I don’t know how successful that’ll be.”

Blake said the geese-chasing dog is the most effective method of controlling the geese. The dog, Lady Zaphlyn, is a Rottweiler owned by Holly O’Malley, a groundskeeper that comes with O’Malley when she feels like chasing the geese.

After hearing that NKU was looking to buy dogs, O’Malley volunteered. Many of NKU’s staff brought their dogs to chase away the geese as well.

“It’s a lot more work trying to work and have your dog here than they realized,” O’Malley said.

Since Lady has been at NKU, the goose population has dropped by 90 percent, according to Blake. O’Malley has even noticed when Lady cannot come, that the geese try to come back. When Lady started this about four years ago, there were about 50 residential geese. Now, she says there are two geese that try their best to evade Lady.

“It definitely makes a difference if she’s here or not,” O’Malley said. “They fly by and see her here; they don’t even bother to land.”

Lady goes everywhere except the water. O’Malley said some geese have learned that. That is when she brings her other dog, an Australian Red Heeler, named Pancakes. Pancakes loves to swim and the geese love to fly away from her. 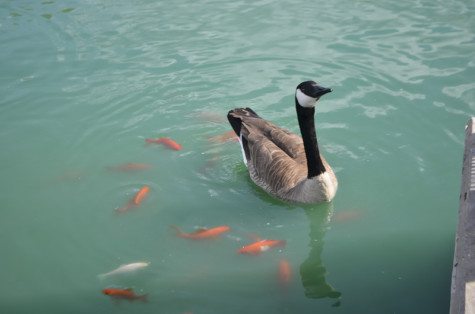 The geese population has decreased at NKU resulting in their droppings and the environmental impact. In order to remain environmentally aware, NKU sprays these droppings into the grass.

“Instead of every one or two feet, now we have one or two piles on the entire sidewalk,” Blake said.

Walters loves the geese, but believes people who do not like the geese give the reason of their droppings. Hearing the geese honk while walking to her car makes her happy to have them here.

“I mean I love birds in general. But I think the babies are really cute.”

One risk of chasing the geese away is that they will nest on the tops of buildings. Huge rainstorms threaten to wash baby geese down drains. To prevent tragic gosling deaths, Blake said, “If we get her (Lady) out there in a timely fashion, they don’t nest. They go somewhere else and nest.”

Blake explains that where a goose nests is important because their nesting spot will remain the same for future generations.

“If you let them nest and the eggs hatch, they raise the babies there,” he said. “The next year, that same pair comes back again to the same place and so do the babies. And they all make their nests in the same vicinity. So you wind up with a growing population of nests.”

Under advisement, NKU tries to remove nests without eggs in them, especially if they are on rooftops. Therefore, NKU gave O’Malley keys to the roofs of buildings so even Lady can go up there.

“It’s in the best interest of the students, faculty, staff that we try to minimize the number that are here,” Blake said. NKU also puts up signs not to feed the geese and ducks. However, some people feed them and therefore, they follow people looking for food.

Nesting has not been an issue on the ground, according to Blake. There are some nests around the lake by Northern Terrace, which is a county owned lake. The geese, he said, are slowly moving that way. It is only when the geese have nested and the goslings hatched that the mother becomes territorial and or chases students. For the most part, the geese are friendly. The ducks are a little shyer around humans, according to Blake.

“I think it’s kind of impossible to get rid of them,” Walters said about the ideal habitat of the lake and lawn for geese. “The problem is that geese really like lawns because they eat grass. They can see all around. There’s no grass to hide the predators so they can make sure their babies are safe.”

Canada geese were almost extinct years ago, but through conservation efforts, they now make up 5,295,000 of birds around the world, according to the National Audubon Society, which aims to restore natural ecosystems for the betterment “of humanity and the earth’s biological diversity.”