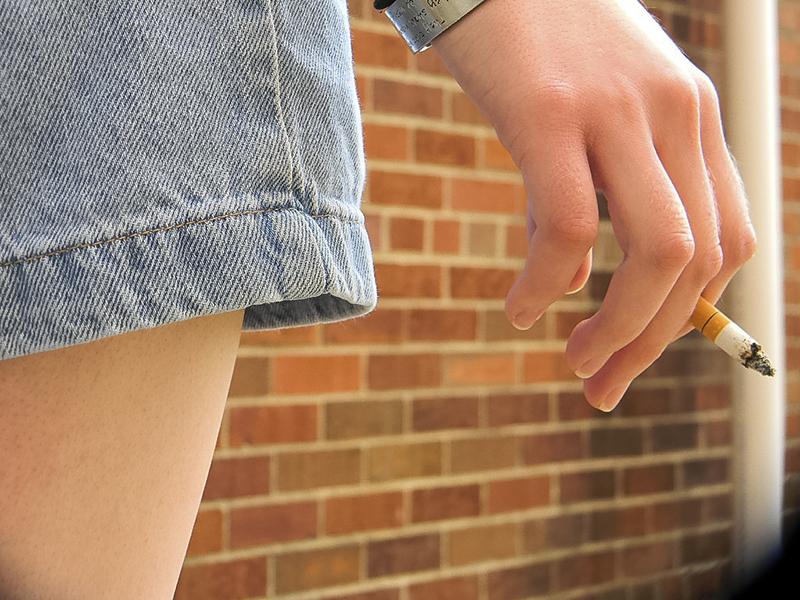 A student smokes on campus despite the current policy.

University administrators are not yet enforcing the tobacco ban. Instead, they are approaching the newly-implemented tobacco policy with an introductory “education” phase.

Leslie Pierce, director of Diversity and Employee Relations in Human Resources, serves on several committees involved with the policy.

“When we went tobacco free, we decided that the first semester would be more educational in nature rather than punitive. So that’s kind of where we are,” she said.

A plan has been proposed to begin enforcing the ban during the fall 2014 semester, once everyone returns from summer break and the campus is again filled, Pierce said.

Disciplinary actions could include fines, participation in a tobacco education course and hearings with supervisors or authorities.

Administrators have created two ways for reporting smokers on campus, an online violation form and a phone hotline. Both of these are available on the Dean of Students and Human Resources pages. Pierce said 59 violators were reported from Jan. 16 to Apr. 3 through the online violator form.

Chief of University Police Jason Willis said not everyone on campus knows about the policy yet.

“Some have claimed they weren’t aware of the policy and that’s okay; I took some time and educated them about the policy and explained it to them,” he said. “It takes time to do that.”

Dean of Students Jeffrey Waple said that it’s hard to find time to approach the smokers he passes on campus.

“It’s a challenge in your daily life, you’re on your way to somewhere, to stop and talk to them,” he said.

But smoking and tobacco aren’t the only things banned from campus; the policy also prohibits the usage of products that simulate the effects of tobacco or mimic its taste.

“It’s no better for them than smoking,” he said. “The bottom line is, the decision was made here that it’s a tobacco-free thing and we’re not going to permit those alternative uses.”

Administrators say that the culture on campus is what will influence that change.

Willis said administrators are trying to “reinforce that we’re making these efforts because it’s a wellness thing.”

“We don’t want it to come down to enforcement,” he said. “We want people to make healthy choices.”

Blake agreed, adding that people should respect the campus’ no tobacco policy.

“Right now the culture is ‘why can’t I smoke, it’s not against the law.’” He responded to that philosophy by saying, “it’s not. It is against the campus policy.”

Meanwhile Blake says Facilities Management are cleaning up after those who are still dodging the rules.

Since Facilities took away all cigarette receptacles from around campus in January, they have to clean up cigarette butts, although Blake says the number of cigarettes left around has diminished with the policy’s implementation.

“Right now we’re involved in cleanup for people that are hiding and smoking,” he said. “We’re picking up a lot less than we were before the policy went into effect in January but we’re still having to clean up from different places.”

Administrators encourage everyone in the NKU community to be involved in enforcing and spreading the word about the policy.

Waple agreed, adding that he feels that once people become more educated about the policy, NKU will see more enforcement happening.