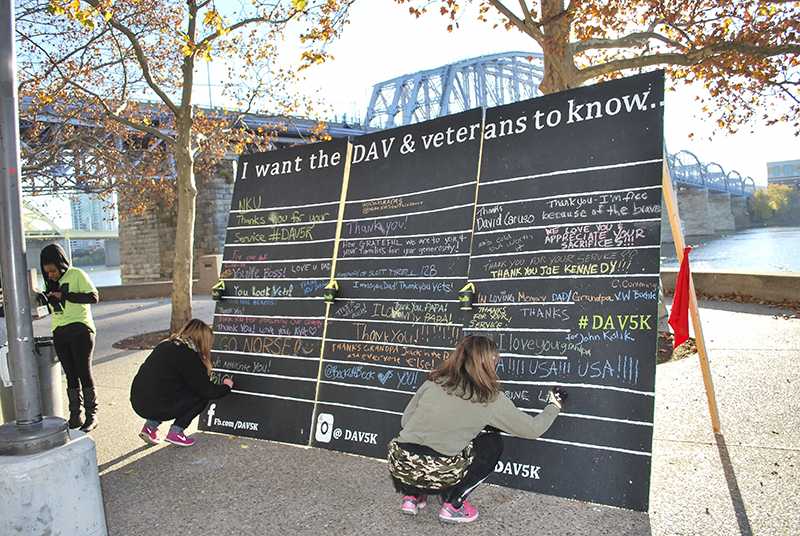 Participants write messages to veterans with chalk on Savicki's wall.

A student in Professor Jenny Gardner’s Event Planning and Management class (MKT 335), Savicki was inspired by public artist Candy Chang’s Before I Die global art campaign in which neighbors in a community publicly write their hopes and dreams on a wall designated for the purpose.  Based on Chang’s project, Savicki wanted to construct a wall for the DAV 5k in which runners could write messages to veterans.

Although the class’s assignment involved planning activities for next year’s race, Savicki told Gardner he wanted the wall to be a part of this year’s race, held November 9, 2013.

Gardner approved the project.  Over the next week and a half, Savicki estimates he spent about sixty hours constructing the wall while juggling schoolwork and his job as a server.

The finished product was displayed for three hours during the DAV 5k at Sawyer Point and dozens of people wrote messages on the wall with chalk.

Savicki caught the attention of DAV and was offered an internship this semester in corporate development.  He credits Gardner’s class for introducing him to the organization.

“I had no idea what the DAV was,” Savicki said.  I’ve always been into cause marketing and this is exactly what cause marketing is.  Everybody knows a veteran and everybody can connect to a veteran, even if they’re not in your family.”

The wall is currently on display in the Haile/US Bank College of Business as part of the Celebration for Student Research and Creativity.  It will be used again at next year’s DAV 5k.

Savicki is grateful for the support he received from his classmates and Professor Gardner.

“I’d like to say thanks to Professor Jenny Gardner for all the support and having faith in her students.  She cares about the success of her students and she’ll do anything that it takes,” said Savicki.

Savicki has since submitted an article and pictures of the wall to the official Before I Die website seen here:http://beforeidie.cc/site/cincinnati/.  The wall is also featured on Instagram and Twitter @MyDAV5k and #DAVWallProject.