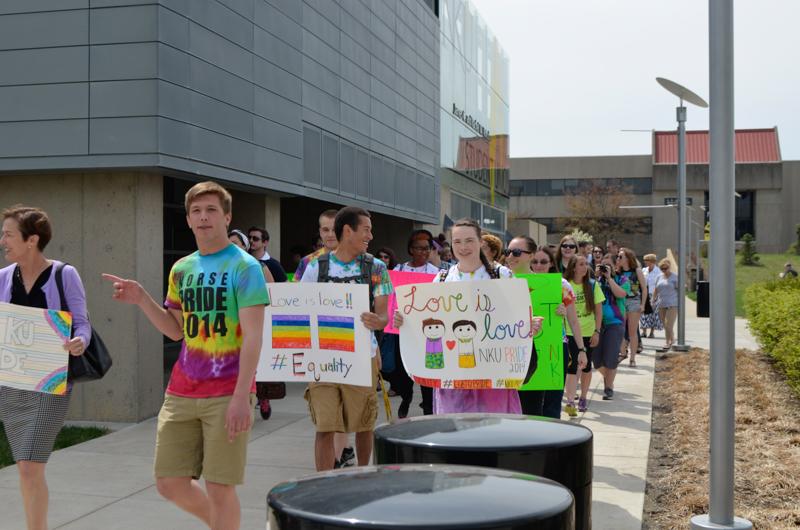 In the past, NKU's Pride March has served as a start to Pride Week. This year's march is NKU's 5th.

Pederson, giving his last formal speech as SGA president, said he was proud of the resolution passed that brought an LGBTQ office to campus.

“On April 1 of last year, we, the Student Government Association, unanimously voted in favor of the development of the LGBTQ office to serve an underrepresented minorities need,” Pederson said. “And we are excited to say that with respect to higher education as a whole, we are on the front end of that.”

After Pederson concluded his speech, he then handed the mic over to  Mearns.

Bonnie Meyer, who has only been in the position of director for eight months, took the stage and thanked administrators, her colleagues, and students for all of the support they gave to the event.

Following the speeches, DJ Planet Venus played a series of upbeat songs throughout the afternoon including Pharrell Williams’ “Happy” and Justin Timberlake songs.

Various tables were also set up on the sidewalk near the amphitheatre supporting the LGBTQ program, such as the American Chemical Society, who set up beakers holding rainbow-colored liquids.

Having been on campus for nearly 15 years, first as a student and now as staff, Jeff Iker said that it’s great to see campus so accepting of LGBTQ students.

“Through the Allied Zone training that I’ve gone through and the various speakers, and this, it’s really cool to see how mainstream everything is becoming on campus,” Iker said. “It’s really great to see growth in the LGBTQ program and services.”

Following her speech, Mearns commented on the positive energy she has felt on NKU’s campus ever since she came to Northern Kentucky for her husband’s presidential interview.

“I could tell that there were people that were maybe a little surprised, as people walked by, but nobody was like, ‘Oh, that’s bad.’” Mearns said. “But the energy on this campus is very positive and this is nothing but.”

According to Meyer, the positive energy will hopefully continue for years to come.

“This will definitely be an annual event,” Meyer said. “We will keep it in the spring, we may move it up a couple of weeks though because this is a crazy time, and people are very busy.”
Check out other Pride Week events this week including Pride Week Open Mic Night at 7 p.m. in SU102, Common Ground’s “Drag Me To Vegas” Drag Show Friday at 7 p.m. in the SU Ballroom, and APB’s Rainbow Road 5k with The Mowgli’s Saturday at 10 a.m. on Griffin Lawn.