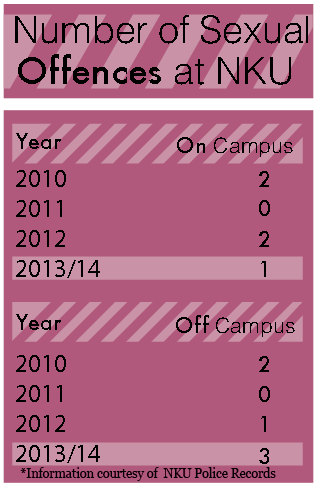 NKU hopes to provide better sexual violence services to students with the new hiring of a Violence Prevention Coordinator this spring.

Although the position is still in the interviewing stage, Ann James, Title IX Coordinator, has already begun to develop a framework of ideas for what students can expect from this new, full-time staff member.

The Violence Prevention Coordinator will be a key figure for students to seek out to report any sexual violence they may experience. The coordinator will specialize in outreach as well as developing prevention and awareness programming with students.

James believes this position will produce more reports as students start to feel more comfortable around the coordinator whose job is to solely help them.

“We saw the need for the Violence Prevention Coordinator because when students needed to report that they had been victimized by some sort of sexual violence, students didn’t know where to go,” James said.

James said if someone did make their way to the Dean of Students office, they were really only capable of explaining the process for filing a complaint.

“Coming in here can be a little intimidating, so some of them don’t get here,” James said of her office as the Title IX Coordinator, which prohibits discrimination on the basis of gender.

This position has been made possible by a federal grant that NKU applied for last year and received in October 2013. James said without the grant, the ability to hire a Violence Prevention Coordinator would not exist.

“We’re really fortunate we were able to get awarded that grant, because otherwise the budget situation in Kentucky for higher education is not great.”

The grant, which is coming out of The Office of Violence Against Women is just the first step to developing the wide range of services necessary and ideal for students to have a safe and beneficial place for them to go. James hopes to expand on these services as the Violence Prevention Coordinator begins their work.

Through applying for additional grants and funding, James’ ultimate goal would be to have several different services available as a part of a future Women’s Center on NKU’s campus.

James said that though statistics clearly show that women are the majority of the population that experience sexual violence, everyone is included in the services currently offered, as well as those that may become available in the future.

“All students experience violence and we want to help all students,” James said.

As far as the hiring of the Violence Prevention Coordinator goes, James said, “This is exactly what we were looking for.”

The focus on LGBTQ

In addition to providing more outreach and help through this position, James has been working closely with the LGBTQ Office and new director, Bonnie Meyer, to assure that the LGBTQ population of students feel included.

“We must make sure that people in the LGBTQ community know they can come to this person,” James said.

A report released by the White House Council on Women and Girls reported that a study found a heightened vulnerability for the LGBTQ community regarding sexual violence, and therefore, the LGBTQ population of NKU is important to reach out to and make sure they feel included in these services.

Take Back the Night

On April 14, the annual Take Back the Night event will take place on NKU’s campus. Take Back the Night, which is geared toward outreach and advocacy for students by Students Against Sexual Violence, will be another event in the attempts to make this issue of sexual violence more talked about and recognized at NKU.

Destiny Blair, a junior at NKU and who is also on the committee for Take Back the Night, promotes the event with one word: empowerment.

“Most of the speakers are survivors and they’re telling their story of how they’ve overcome their challenges that occurred when they were a young age, recently, or know someone who has been a victim of a violent act,” Blair said.

Blair, who went to Take Back the Night for the first time as a freshman, became passionate about sexual violence advocacy and was approached by Ann James to join the planning committee for the past two years’ events.

Take Back the Night will take place April 14 at 6:30 p.m. in the Student Union Ballroom. Several groups, such as The Women’s Crisis Center will have tables set up to for attendees to talk to and provide more information for anyone who needs it.