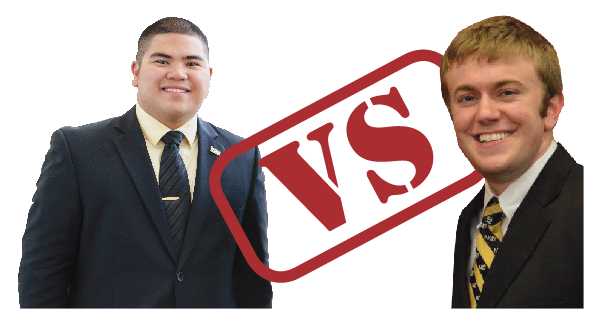 In light of his recent two-vote loss in the 2014 SGA Presidential Election, current SGA Vice President David Trump has confirmed that a grievance has been filed against current president-elect John Jose, petitioning the election results.

Trump said the grievance was filed due to the possible breaking of campaign procedures by Jose and Hahnel in their recent election campaign.

However, Jose said he had not yet received any official paperwork or been contacted by the judicial council regarding this matter.

“I understand the reasons why David and his camp might file something like this because of how close the election was, but I am extremely confident that we won fair and square,” said Jose in a message to The Northerner.

Current SGA President Erik Pederson also confirmed that a grievance was filed, but said that he does not know specific details.

“A grievance is a formal complaint that a candidate can submit to the judicial council in the dean of student’s office, signifying that one or more campaign violation could have occurred,” Pederson said.

The policies surrounding SGA grievances have also recently been changed, according to Pederson.

“This year we changed the rules,” Pederson said. “So, if a grievance is severe enough they [the candidate the grievance was filed against] lose a percentage of the votes.”

Grievances have been filed in the past, one being filed against Pederson himself in his last elections.

“One was filed against me in the past,” he said. “It’s not typically released why.”

However, with the recent changes in policies, Pederson believes this grievance could make a huge difference.

“In a two vote election, that can definitely swing the results,” Pederson said.

Both Jose and Trump asked to delay further comments until the matter has progressed.

Check back to The Northerner.com for continued coverage of this and other SGA election-related updates.