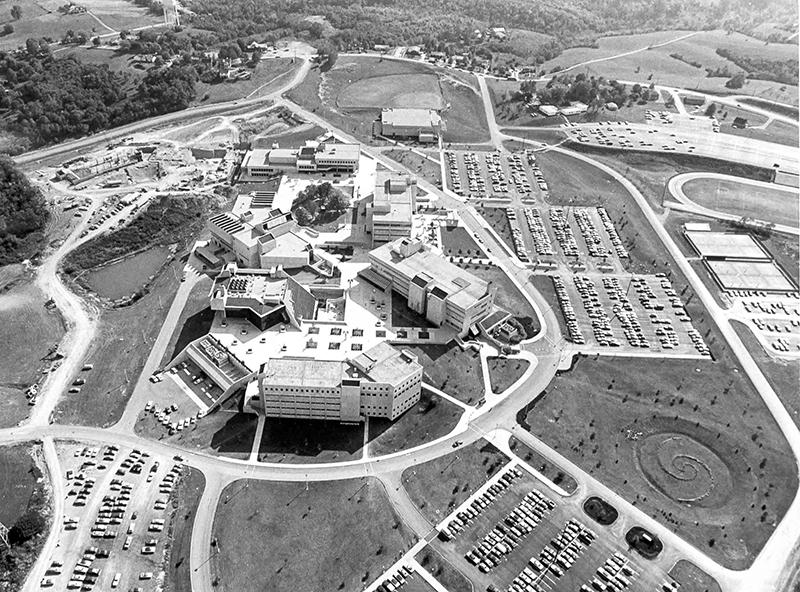 Photo courtesy of the Schlachter Archives

A farm and a few people with a dream in 1968 was all it took to create a place that many now consider their home away from home.

Founded in 1968 at a small campus located in Covington, Ky., NKU soon established its current location with one massive building and a small house in Highland Heights, Ky. in 1972.

Since that time, NKU has continued to grow.

And one man who has been here for it all is James Ramage, a history professor, who was hired in January of 1972.

“We had one building of classrooms, the Nunn building, the bookstore and the snack bar were in a little house, across from Regents Hall,” Ramage said. “When it rained we had to put down boards to get to it.”

Ramage also compared NKU’s campus in 1972 to be somewhat of a camp, like a frontier settlement.

Since then NKU has gone through many phases of construction according to Larry Blake, the Assistant Vice President of Facilities Management.

The phases include moving from Covington to Highland Heights, rapid construction during the 70’s to get buildings up, a few more buildings in the late 80’s and early 90’s, and then the most recent spurt in 2003 with concepts for the Bank of Kentucky Center, Griffin Hall and the Student Union, according to Blake.

When asked if he ever saw NKU becoming what it is today, Ramage said there was no way he could have imagined such a thing.

“The goal at that time was to reach 10,000 students and it was hard imagining ever reaching beyond that,” Ramage said. “I wouldn’t have imagined campus as it is today in 1972, it was one building at a time.”

Since the last round of buildings to go up, NKU has gone into what Blake considers a “beautification phase.”

“Everything was rapidly built, it was ‘get it up, get it going,’” Blake said. “Now it’s going back and trying to make the concrete jungle disappear.”

Ramage said he feels he’s had a role in this as it was his suggestion to Dr. Steely in 1976 for NKU to add more trees.

Blake also said that in the “beautification phase” they are working towards adding more greenery to soften the harshness of campus.

“The landscaping and the lake are my favorite parts of campus, but I enjoy it all,” Ramage said.

As NKU moves on into the future Blake said he’s unsure of where campus will go.

“The dynamic is changing somewhat,” Blake said. “With online learning we don’t necessarily know what that means [for adding more buildings].”

However, Blake said in the future the design of campus will become more modern with more glass and steel.

Once the upcoming Health Innovations Center is under way, Blake said that they will begin looking into updates and modifications to current housing.

While the addition of more buildings after Health Innovations is unsure, one thing is for sure, NKU’s campus has come a long way since it’s former days as an isolated farm amongst the hills of Kentucky.