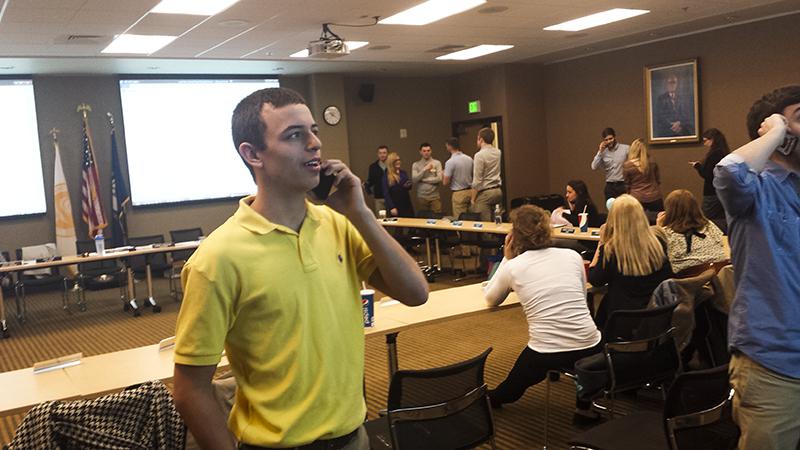 SGA Senator Jarrod West calls Kentucky's legislative hotline. The senators called the hotline during one of their meetings.

President Mearns announced in an email Monday that NKU will get the $97 million for the Health Innovation Center. SGA President Erik Pederson said at Monday’s SGA meeting that the 2.5 percent statewide budget cut on postsecondary schools is now 1.5 percent and instead of paying $5 million for the Kentucky Employee Retirement System, the university now only has to pay $2.5 million.

However, the budget did not include the bonding that would have built the Health Innovation Center, which would have costed $97 million.

NKU President Geoffrey Mearns said this won’t mark the end of the Health Innovation Center. He said that he remains cautiously optimistic and that NKU will continue to lobby with the senate and the house for the center.

“Game’s not over,” Mearns said.

On that note, the Student Government Association passed two resolutions aimed at alleviating some of the financial difficulties facing NKU within the past few weeks.

The first of the two requests asks that NKU will be allowed to reserve $97 million for the Health Innovations Center. The second asks Kentucky State Legislators for $16 million to help cover the $5 million NKU needs for the Kentucky Employee Retirement System.

“Both resolutions are [about] sending a message to state legislators about the importance of the Health Innovations Center and fully funding KERS pensioner form contributions for universities,” said Elizabeth Ruwe, one of the SGA senators who helped write the resolutions.

“Last year, the legislators decided to take our pension reform,” said Jacob Edwards, a member of Community Ambassadors — an organization that has partnered with the SGA on this initiative. “One of the ways to help alleviate the stress of pension programs was to have employers contribute five percent more to employee pension programs.”

The state usually takes care of the KERS pension programs, but decided that universities could cover that amount because they have a different revenue stream through students, according to Edwards. He said that NKU needs about $5 million for KERS.

“It doesn’t go towards any new buildings, teachers or even books in the library, it just goes towards the KERS pension plan,” Edwards said.

NKU first began using KERS back when it was just a community college.

“Back when NKU transferred from a community college to a regional university, the majority of the staff remained in the KERS system and NKU would have to pay the highest amount of any university,” Edwards said.

“They’re kind of stuck in limbo, and [they] really don’t have a voice in Frankfurt to change that,” Edwards said.

Ruwe said she sent copies of the resolutions to the members of the Northern Kentucky Caucus.

The reason SGA asked for $16 million instead of just enough to cover KERS, is to cover other financial problems facing NKU, according to Edwards.

“There’s three issues ready facing postsecondary education right now,” he said. “We’ve kind of taken a backseat on one of them and that’s the 2.5 percent cut in the university. All other big name universities have kind of gone after that, so we’re focusing on the two that really impact us.”

The SGA encourages all of the university to get involved by contacting their state legislators to voice their concerns. The hotline number is 1-800-372-7181.