Professors share strategies against cell phone use in class 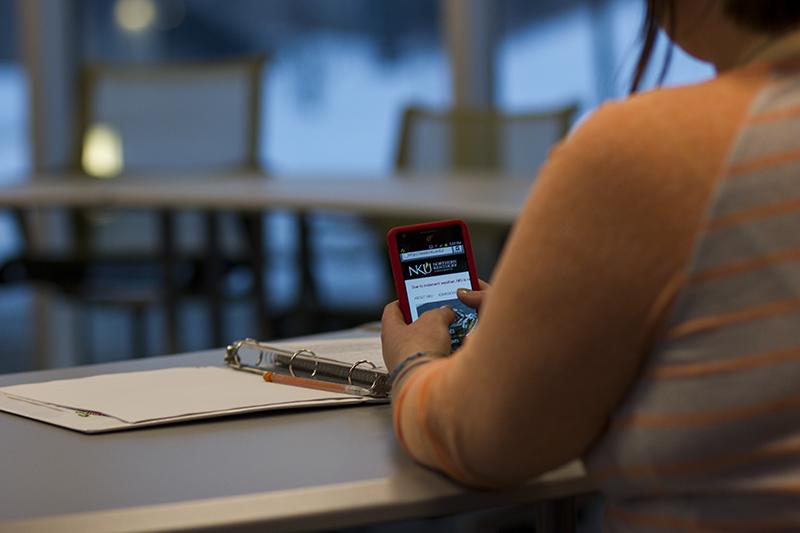 No one is more social than college students. So it’s really no surprise when students spend most of their time communicating with one another and the outside world, even during class.

However, professors all over are working against these social distractions in the classroom, which have shown up most recently in the form of texting or surfing the web with a smart phone.

Educators at NKU want students to get the most education for their money and are therefore applying specific strategies to help keep students engaged and paying attention during class.

Below are four NKU professors’ strategies for keeping their students’ attention on the course material and off of their phones.

Dr. Cellio: Put the desks in a circle or sit around a table

Dr. Jennifer Cellio, director of the Writing Instruction Program, has found that students participate more when everyone is sitting around a table.

“I always put my classes in a circle…that kind of makes it less desirable to be doing something else when you have all your peers to interact with,” she said. “It’s easy when you’re sitting in rows for the student in the back row to not be participating.”

While Dr. Cellio said she does not usually have a problem with students using cell phones in her classes, she does find it frustrating when a student pulls out his phone during an activity.

This approach of sitting around a table is easier for upper-level classes or courses that are on a special topic, but for entry level classes the number of students is often too large to arrange the furniture. So other adjustments have to be made.

Professor Rudy Garns of Sociology, Anthropology and Philosophy said that it helps to retain eye contact throughout the lecture.

“Don’t let someone feel invisible so that they don’t feel like they can be texting without anyone noticing,” he said. “Sometimes when I feel like someone is disengaged I can call on them.”

Garns said he likes to keep an engaged classroom when possible. “I ask a lot of questions; usually it’s controversial stuff,” he said.

Garns said that he has gotten better at recognizing when a student is texting during class.

“In the old days when it was new I didn’t know what the behaviors were,” he said. “I didn’t know how to distinguish from proper and improper usage, but all these years later it’s become such a part of the fabric of society…that I feel much more comfortable seeing the right kinds of behaviors. It’s not perfect but it’s better than nothing. I don’t think we’re always fooled by these things.”

“In my opinion the question is, how do you make the class engaging?” This is the philosophy of Dr. John Alberti, director of graduate studies in English.

“If our brains get bored, they will always find something else to engage with,” he said. “Part of that is how do we direct that.”

Alberti feels that students get out their cell phone when they don’t feel like they’re doing something interesting, so part of his strategy is to incorporate cell phone usage into the lecture. In recent semesters he has experimented with allowing students to use their cell phones as research tools. “I like having lots of sources,” he said. “This can be a great reference source, and it can also be that the lecture is really boring.”

He added that professors don’t always have the answers.

“As a teacher I don’t think our role is ‘we know everything and we carry it all in our heads.’” We’re human beings so we’re really kind of glitch,” he said. “I’d rather have good information in the classroom, and that’s not my strength, memorizing information.”

While Dr. Alberti trusts his students to use their phones as research tools, a professor across campus requires students to earn that privilege.

Dr. Perilou Goddard: Have students earn the privilege to use their phone in class

Dr. Perilou Goddard, professor of Psychological Science, teaches Psychology 101, which is rumored among students and faculty to be the hardest class in the program. She said that in the fall her class includes mostly brand new students fresh out of high school, which means she has a harder audience to instruct.

“In that class I’m trying to help them socialize to college,” she said. “Especially fall semester, most of the class is right out of high school.”

She added, “It’s a new world, you have a lot more freedoms.”

Dr. Goddard said that in her class syllabus she states her opinion of cell phone usage in class.

“Right in the syllabus I say, ‘I think using cell phones in class, especially if it’s frequent, is rude. And I also think it’s counterproductive. You think you’re paying attention but you’re really not.”

Goddard said she then presents her policy to the students: “I’ll give you a chance to show me that I’m wrong and that you are in fact able to text with your cell phone and check your messages…and still fully process and do well in the class.”

Then Goddard presents her deal.

“I try to make it a reward so they earn the right to do it,” Goddard said. “It helps me recognize the students that are excelling in the class.”