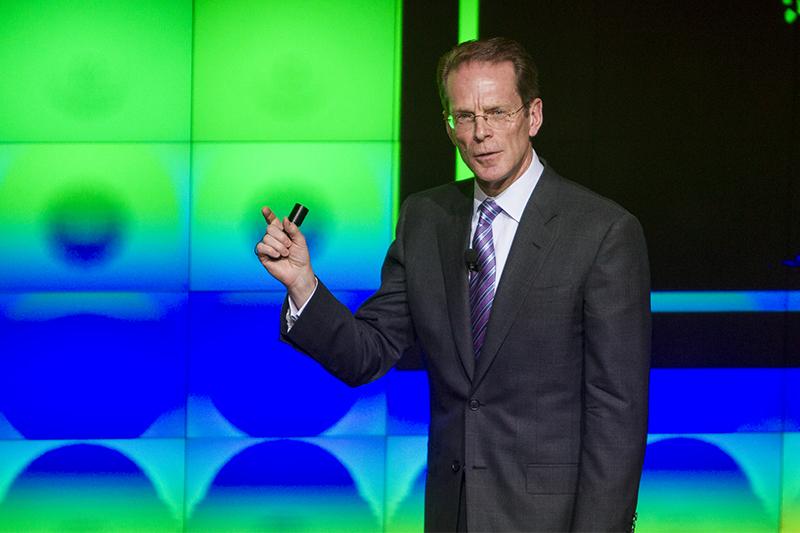 NKU President Geoffrey Mearns presented an exclusive look into his previous life as a prosecutor with the responsibility of encouraging executions of terrorists in his role as an assistant U.S. attorney.

Mearns navigated an audience of around 170 people on an intense, emotional journey as he discussed and showed critical details surrounding an American tragedy on Feb. 19 in Griffin Hall’s George and Ellen Rieveschl Digitorium.

Brief history about the mass murder:

According to the FBI’S description on http://www.FBI.gov, at 9:02 a.m. on April 19, 1995, a strategically placed bomb, that was built by Timothy McVeigh and Terry Nichols, exploded, killing 168 people, including 19 children, and injuring several hundred more. McVeigh used a Ryder truck to transport the bomb and parked it in front of the Alfred P. Murrah Federal Building in downtown Oklahoma City. The explosion demolished a third of the building, as well as incinerating dozens of cars and damaging or destroying over 300 nearby buildings.

Mearns, who previously practiced law for 15 years, structured his speech around three questions with explanations, including the terrorists’ personal reasons for planning and executing the attack, the significant evidence and how it mattered and his personal memories that impacted him the most.

However, a portion of the lecture focused on the emotions and suffering that was inevitable for people that were involved. Especially, after a member of the audience asked if the culprit, Nichols, maintained a calm demeanor while prosecutors presented evidence, particularly concerning the 19 children who were killed.

Mearns reflected on some of the daily challenges he faced while working on the case. He said his team would frequently meet with people involved in the tragedy, such as the mothers of the deceased young children, the night before they would testify.

“We’d hear their stories,” Mearns said. “It was impossible to hold back your emotion when you’re meeting with them.“

According to Mearns, the judge made it clear that it was forbidden to show any emotion when presenting evidence in the case. However, some of people were a little more sensitive than others.

“My technique was… I would know when that testimony was coming, and I would stash a couple of tissues in my pocket so that if I had to, I could do this very quickly,” Mearns said while pretending to wipe his face.

What was also interesting about the prosecution, according to Mearns, was the conferences held in the private chambers in the afternoon following the trial in the courtroom.

Mearns had to sit at a “relatively standard conference room table” a few feet across from Nichols and two or more of his lawyers. He said there were times when he and his teammates reflected on what they did for a living.

“On the one hand, it was totally justified and [we] felt proud to be representing the United States in that prosecution,” Mearns said. “But on a human level, we recognize that I was trying to have that guy executed.”

Mearns also gave advice to people who are proponents of capital punishment.

“As you could imagine as the prosecutor of a capital case, I am not morally opposed to capital punishment,” Mearns said. “But what I urge you to do, is never forget that there are people that have to participate in the criminal justice system that are seeking to produce that result. And don’t lose sight that while the most rational, reasonable people are participating in that system, it is an unusual experience.”

That particular career path is something that Mearns said most people wouldn’t seek out.

Reaction from the audience:

Leonard Booker, a junior public relations major, said the president offered so much information as far as his background as a federal prosecuting attorney, and that he can remember the day it happened.

“He just gave more detail to it than I got from the media previously,” Booker said. “So it was very refreshing to get that information.”

Mark Neikirk, the director of Scripps Howard Center for Civic Engagement, said the Six@Six Lecture Series started four years ago to take the expertise, talent and passion of the NKU faculty and share what is on campus with the community at large.

“The series itself… Is to connect the campus and community in this way, and it’s really part of the public engagement mission of NKU,” Neikirk said.
For a schedule of future Six@Six events, follow this link: http://www.brownpapertickets.com/producer/410352