Winter wreaks havoc through all corners of campus 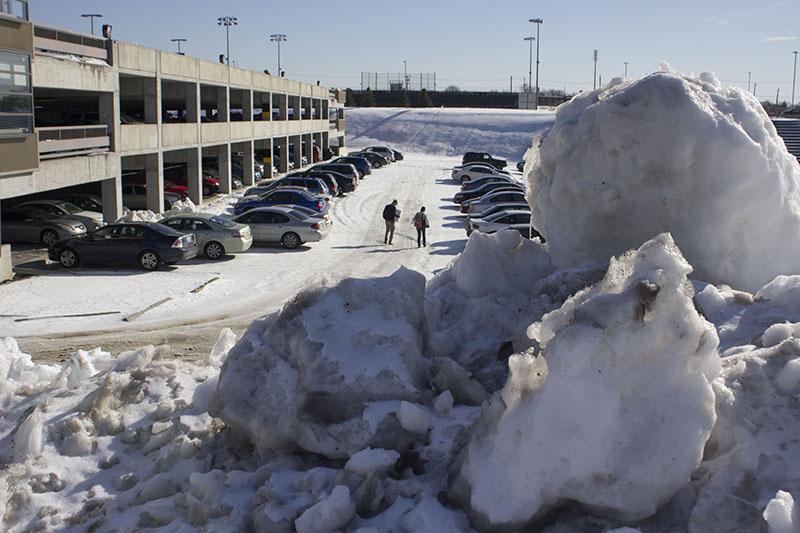 Hazardous weather hit campus and had lasting effects this semester across the NKU community.

From facilities using about $200,000 worth of salt to help secure campus grounds to students feeling “cheated” out of about 12 percent of their class sessions for Tuesday night courses, the NKU community is still feeling the effects of the recent hazardous weather in a variety of ways.

“I think some of the factor is that this event doesn’t happen every year,” said James McGuffee, associate professor and computer science chair. “It’s either a 10 or a 30-year weather event, so how do you plan for it?”

After the “freak winter” conditions caused NKU to delay or close six times so far this year, departments around campus are working out how to successfully proceed this semester in their schedules and courses.

Main concerns for professors and students include continuity, lack of face time and multiple missed classes early in the semester. For example, about 90 students needed to make up a biology lab due to the weather, so they decided to just cancel it, according to biological sciences professor Erin Zoller.

“The most challenging part is both having to figure out really quickly what to do and then making sure that everybody gets that information; everybody is on the same page and understands what’s going on,” Zoller said. “It’s definitely been a headache for the instructors. We’ve already gotten into this course what we think is vital to know.”

Classes that have canceled more than once due to the weather this semester are facing additional problems concerning engagement with the material. For example, many Tuesday night classes have not met on campus for weeks.

In addition to making it more difficult to connect and absorb course content, other students feel weather conditions have cheated them from some valued class time this semester.

“The other aspect of it is I feel that I’m getting a bit cheated in the sense that there are 16 class sessions, and basically 12.5 percent of those are now lost,” said NKU graduate student Eric Emrick. “So, my tuition is really only funding 87.5 percent of a course.”

NKU does not have a university-wide policy to address the issue of missed classes due to hazardous weather. Departments decide how to best deal with such issues based on their individual department’s needs, according to McGuffee. However, recent issues have caused some professors to consider adding a weather action plan to their syllabus in the future.

Courses are continuing to be less affected by such unexpected severe-weather cancellations due to the online technology available to professors and students. Although students might not be able to meet in person, they might be expected to meet and engage more with their class online during snow days in the future.

“We have to remember that we have the technology for a reason,” Erik Pederson, Student Government Association president, said. “We didn’t purchase it so we could just say that we had it. We purchased it for situations like this; situations where we actually can’t get to the classroom, so we can still get the assignments without necessarily falling behind.”

Some courses are adjusting and using available technology and more hybrid class methods, such as Tegrity classes, Blackboard discussion boards and Google hangouts, to compensate for canceled classes and face-to-face time. Some faculty have discussed the idea of “a minimum level of technology that every NKU student should be expected to have,” according to McGuffee.

“It wouldn’t just be technology but connectivity as well,” McGuffee said. “It’s like 30 years ago, you had to have a pencil and paper [for college].”

His computer science graduate class experimented by using Google hangouts to meet up when class was canceled the second week. About 30 percent of his students took advantage of this video chat technology to help keep up with the class.

Daniel Esterline, a general chemistry professor at NKU, Thomas More and the University of Cincinnati, recommends being open to experimenting with available technology to find out what works for each course.

“It’s kind of like industry, you get to see what works best and what doesn’t,” Esterline said. “And when you hit on something that works well, then faculty promote that and more and more people start using it.”

The unexpected hazardous weather conditions have continued to impact NKU across many different levels of the community.  Read below to see the impacts on each area.

The theatre department has struggled with the winter weather as well.

Arabian Nights is set to begin its run in the Rosemary Stauss Theatre on Feb. 20. However, further cancellations could leave them with much less rehearsal time than expected.

“This has put us behind in preparing the show for the moment,” Robertson said.

Robertson hopes that they can find themselves caught up on rehearsal time in the coming week. He remains hopeful that there will be no further cancellations prior to their opening night.

The sports that are currently in session are significantly hindered during the winter weather due to practices not being able to be held outside.

In the Atlantic Sun Conference, NKUis the most northern school.

According to Todd Asalon, head baseball coach, the baseball team hasn’t been able to practice outside one time this season.

The baseball team’s first game is this weekend where they will be traveling to Alabama.

“This year, like every other, we haven’t been outside,” Asalon said. “We have had to practice at Champions Baseball Academy off campus at seven a.m.”

With all the snow and ice this season, the university has resorted to using massive amounts of salt to rid campus of any potential ice-related hazards.

“We just ordered another 150 tons.  I’d say we’re in the neighborhood of, oh I don’t know, 250 tons [used so far],” Larry Blake, assistant vice president of facilities said. “And that’s not just salt, it’s Ice Melt, it’s other materials too.”

The salt used to combat the snow and ice gets down in cracks and freezes again, which causes things like potholes to occur around campus, according to Blake.

There are other downsides to using all this salt as well.

“Research has shown that the use of road salts in winter can reach lethal levels for stream organisms,” Kristy Hopfensperger, NKU biology professor, said. “High amounts of salt in our streams are unnatural and can lead to reduced ability for aquatic organisms, like fish and amphibians, to function, which can influence the entire stream ecosystem.”

Municipalities across the country are working on alternative solutions to replace salt, due to its dangerous effects on the environment, according to Hopfensperger.

A group of NKU students is involved with an ecology project focused on sampling local bodies of water for toxic algae. The project was planned to include samples from winter, like last year’s course, but the snow is making it difficult to access lakes.

“Lakes have been frozen because the temperatures have been extremely low,” said biology professor Miriam Steinitz Kannan. “Even going out has been a problem and accessing many of our sites has been impossible. So, we have a lack of records for this time period.”

Kannan said that while the building being closed on Wednesday was a problem, it hasn’t really affected her students because they knew this was coming, so they were prepared. They caught up by finishing Wednesday’s work on Tuesday before leaving campus.

“There have been two days like that, where students couldn’t come in to check on things,” Kannan said. “Some of the projects we have in biology have to be done every single day.”

While campus residents and commuters alike have struggled to clean off and start their snow-covered cars this winter, campus crews have been tirelessly working to clean up campus parking lots to make NKU as accessible as possible.

For each major snowstorm this season, the university has used a combination of snow plows, pickup trucks with blades, two large dump trucks, gators and bobcats with brooms and buckets in an effort to clear streets, parking lots and sidewalks.

Between twelve and twenty people are needed to operate the trucks and other equipment throughout the night.

About $200,000 worth of salt has been used so far to treat roads, parking lots and walkways, according to Blake.