Professor Brings Together Chinese and Law 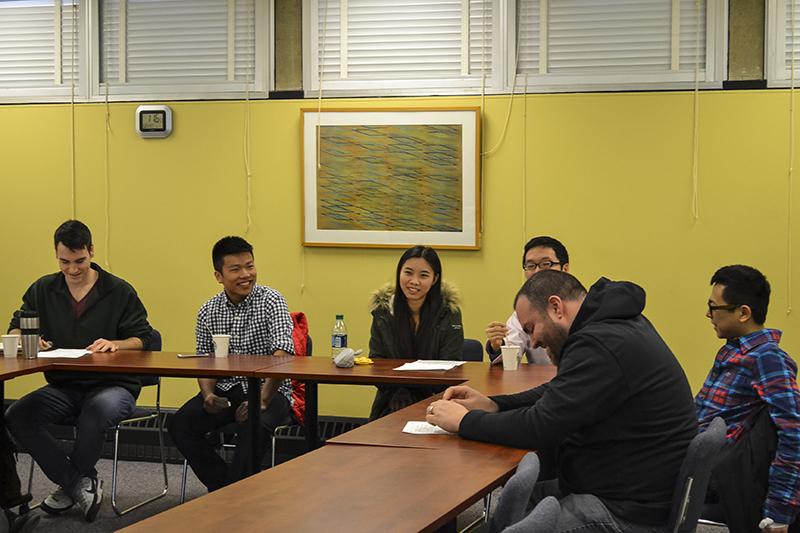 Students gather for the Chinese Chat. Together, they practice reading and speaking Chinese.

Chris Gulinello, professor at Chase Law School, loves Chinese. His passion for Chinese has led him to get an undergraduate degree in Chinese, study Chinese for two years in Taiwan, and work as a foreign attorney in Taiwan for three years. Today, his passion for the language prompted Gulinello to form a Chinese Business Law course, which was started last semester.

“Students who want to have a broader understanding of Chinese law should have that opportunity, especially since I’m here and I can do it,” he said. Gulinello not only created the course, he is creating the book. “Creating the course wasn’t hard, it was creating the text, because there is no text out there for this,” he said. “So I’m actually writing the text. I’ve written several chapters with co-authors…from Beijing and Taipei. And we’re writing the book together.” Gulinello began co-writing the book last June, and says that by the end of the semester the final chapters will be finished.

Gulinello has also invited an extra learning bonus to his courses – Chinese students. In all of these classes we have Chinese nationals sitting in with us so [the American students] are constantly in connection with people from China,” he said. “When we have a discussion about the law, there is definitely a different background…they’re a socialist society, and so they have different views…than we have in a capitalist society.”

Bao Yunjie is one of the Chinese students that sit in the Chinese Business Law class. “I’ve learned law in China so it’s kind of doing things in a reverse way. In China, we translate English law into Chinese and here we translate Chinese law into English,” she said, “I can use what I’ve learned, like the syntax in English, to help an English student to understand Chinese law better. It’s kind of interesting.” Yunjie is a junior exchange student from East China University, studying Translation and Interpretation.

Professor Gulinello has also started a group called Chinese Chats, which are a group of students that meet weekly to practice speaking and reading Chinese. “It’s a way for students without a background in Chinese to get better at speaking Chinese. The thing is that when you practice speaking a language you get better at reading it, and vice versa,” he said. “What we’re doing here is basically getting comfortable with Chinese and the grammar of Chinese and as they’re going to doing their classes of…elementary Chinese…”

The Chinese Chats not only include those enrolled in Chinese language classes, but also exchange students from China. “It gives us a chance to…interact with someone from another culture, another country. I always think it’s more fun when they come,” said Gulinello. He added, “We have a couple of students who aren’t even studying Chinese that come and just want to be a part of it and we’ll welcome anybody.”

Gulinello sees broad market for students with a background in Chinese law in today’s economy. “We’re part of a global economy and China is a big player there in that global economy,” he said. Gulinello said that even local companies deal constantly with Chinese businesses. “I think in past years it’s been mainly focused on the coasts, but I think…businesses in Kentucky or Ohio that have interactions with Chinese businesses are a growing number.”

He said that he hopes his current students will pursue a career that deals with Chinese businesses, either in China or the U.S. “I’m sure there are lots of businesses here that are doing business with China that would like to have someone with this kind of background as their attorney.”