The future of Norse Commons 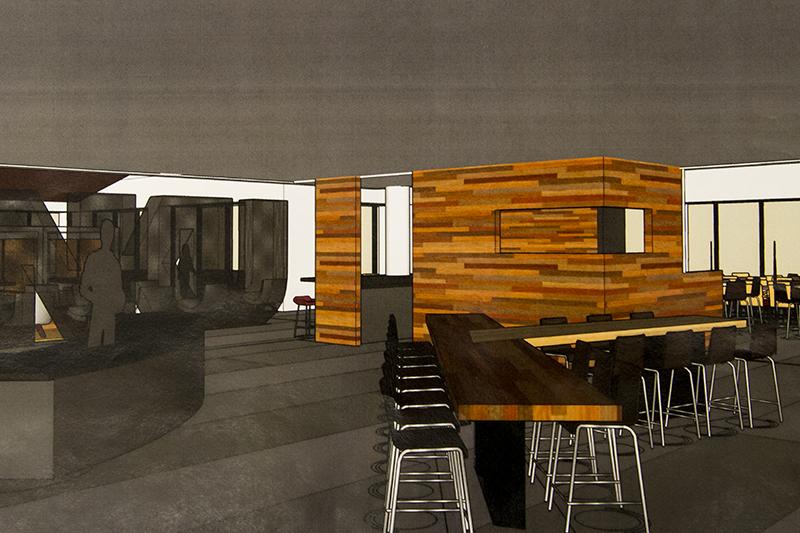 One day in the not-so-distant future, you and a few friends wander through the doors of Norse Commons, tired and hungry after a long day of classes. As you step into the newly renovated facility, you might wave to several classmates seated at high-top tables and long couches in a lobby area filled with comfortable, modern furnishings.

You take note of the housing office and village desk, now located on the right side of the facility where the weight room once was, and make your way toward the Chartwells employee Mary Pat, who swipes your All Card.

Once inside the dining room, you glance up at TV screens digitally displaying tonight’s menu above each of the five food stations. A long U-shaped counter sits nearby filled with all-you-can-eat salad, soup and desserts.

Many of your friends choose to get in line for My Pantry, a unique station that has the distinction of serving breakfast all day as cooks prepare the food right in front of you. Students with special dietary needs or allergies also frequent this line.

After piling your plate high with your favorite foods, you and your friends take a moment to decide whether to eat at a tall counter with bar stools, a round table which can seat up to eight ofyour pals or a long, traditional table lined with brand new chairs.

After stuffing your face, you drop off your dishes and silverware at the new dish return (no more conveyor belt) and take your empty plastic bottle to a recycling area.

Waving goodbye to Mary Pat, you turn the corner and step into the game room, formerly conference room 117. Inside is a huge flat screen TV, more couches and tables, and the walls display Victor Viking as well as each of NKU’s competitors in the Atlantic Sun Conference.

You watch a little basketball, check your mail where the C store was once located, then head back to your dorm, feeling full and happy. In a matter of hours you know you’ll be back again for more.

Such is the experience students will have when they walk through the doors of the newly renovated Norse Commons facility in fall 2014.

Andy Meeks, director of Business Operations and Auxiliary Services, explained that he, Dean Jeffrey Waple, and Housing Director Arnie Slaughter have been discussing a renovation for quite some time.

“We have been talking about this project for probably two or three years and we started out talking about what I refer to as a cosmetic renovation, we’re talking about something that would have cost between $750,000 and $1,000,000,” Meeks said.

But after meeting with Chartwells’ employees, architects, interior designers and engineers a couple of years ago, Meeks, Waple and Slaughter discovered that the building had multiple infrastructure problems.

“It didn’t make sense to spend a million dollars and still have plumbing problems and all that kind of stuff, so we didn’t do the project and instead secured more funds,” Meeks said.

The project is now anticipated to cost $3.2 million and will not be funded by tuition dollars or raised fees, according to Dean Waple. Instead, the money for the project comes from dining operations and Chartwells.

Because the university wants to ensure the project will be completed in time for the fall semester, administrators have elected to close Norse Commons beginning Friday, March 7. Construction will start in mid-March and continue through the end of summer break.

Meeks stressed that the project will be done on time, and students’ food service needs will be accommodated during the remaining five weeks of the spring semester, as well as for students living on campus during the summer.

“We said to [construction officials], ‘This is what cannot happen. We cannot be standing here on the back dock on August 5, 2014 and you tell us that you’re not done and it’s going to be two or three or four weeks before you are done,’” Meeks said. “And so our options brought us to closing Commons following spring break and devising a plan that would get you guys fed and provide food service for others at the university that would need it during this time,” Meeks told students at a town hall meeting.

The Callahan bistro and Student Union will be students’ only dining options following springbreak. NKU officials are working with TANK to provide extended shuttle service to Callahan Hall so students living in the residential village have convenient transportation to an all-you-can-eat dining option.

In addition, a multipurpose room on the first floor of the Student Union will likely be opened up for extra seating and will contain a soda machine, according to Dean Waple. Hours at Einstein’s Bagel Bros. in the library are also likely to be extended. Advertising is set to be released next week officially stating the new hours at all dining locations during the renovation process.

Meeks stated that meal swipes will be transferable at the Student Union for breakfast, lunch and dinner with prices of $5.50, $6 and $7 being covered respectively by each meal swipe.Those with unlimited meal plans are allowed three meal swipes for breakfast, lunch and dinner at the Student Union as well as unlimited swipes at the Callahan bistro. In the coming weeks, students will have the option of changing their meal plan if they feel it will no longer suit their campus lifestyle.

The Housing office, village desk and mailroom will be relocated to an undetermined location within Norse Hall during renovation. The laundry room will be unaffected during construction.

Housing Director Arnie Slaughter believes the long renovation process will be worth the wait.

“I’m very excited. Once the students come back in August and see the newly renovated facility and see how much Norse Commons has changed, they’re going to be pleasantly surprised,” Slaughter said. He believes the new Norse Commons will be like a “mini-Student Union” and that students will appreciate the new hangout space.

A second town hall meeting will be held Feb. 17 at 5:30 p.m. in room 104 of the Student Union with many members of SGA and ACR in attendance.

“It’s our role to give students an outlet to voice different concerns and things they have, and my job specifically is to get that word out there. That’s why we’re having these town hall meetings,” said senior Brandi Cunningham, a history major and the secretary of public relations for SGA.

Contact SGA, ACR or attend the next town hall meeting with any questions, concerns, or comments about the Norse Commons renovation.