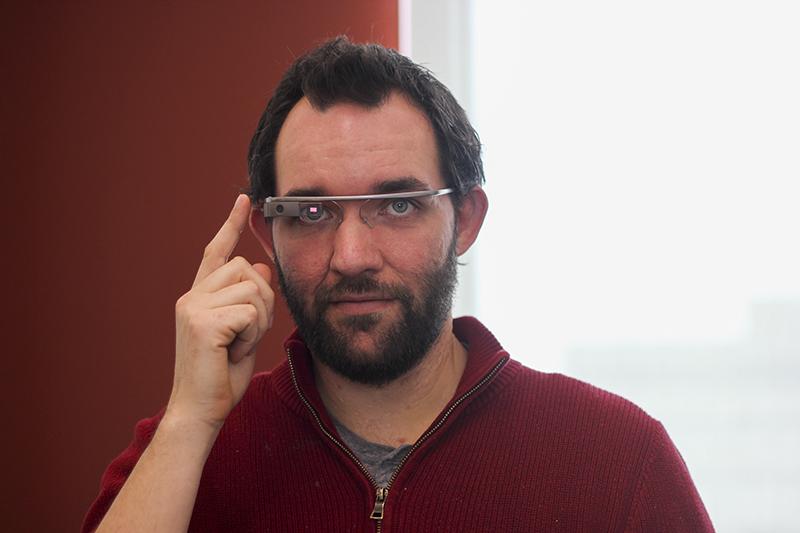 As technology continues to improve and become part of our daily lives, it usually becomes more portable, convenient and user-friendly. While many modern devices have a touchscreen that fits in the palm of your hand, one of Google’s newest gadgets fits on the user’s face like a pair of glasses.

The Google “Glass” is the newest device in Google’s long line of technology, but it hasn’t made its way into the hands of the average consumer quite yet. In an attempt to bring the device to the most tech-savvy individuals, Google has made this product available only through professional invitations.

And one of those recipients was NKU’s Dan Koabel. Koabel, a former NKU student himself, is the current director of creative technology within the College of Informatics (COI), and he’s no stranger to Google’s diverse catalog of products.

“I’ve been using Google products and Gmail since it came out,” Koabel said.

After immersing himself in a number of technology formats in high school including the “Web TV” as well as the Atari and Nintendo’s “Game Boy,” Koabel began learning web development and took some time off after graduation to strengthen his skills.

After five years on his own, Koabel decided to pursue his bachelor’s degree at NKU. He began working at NKU doing web design and eventually became the first Media Informatics (MIN) graduate in the program. Shortly after graduation, Koabel became the COI’s director of creative technology, a position that put him on Google’s radar when it came time to find developers for Glass.

“I actually got an invite but couldn’t afford it personally at the time,” Koabel explained. “But then I started talking to people here at the college and said this would be a cool thing to have.”

Many of the college’s technology groups agreed. After tossing around the idea to the Center for Applied Informatics (CAI), the MINjas, NKU’s MIN student group and most importantly, Dean Kevin Kirby, the funds were gathered and the Glass was brought to NKU’s campus

“Fortunately, Dean Kirby is very open-minded and is really into the experiential side of learning, like exposing students, faculty and staff to the latest cutting-edge technology,” Koabel said. “We like our students to be well-rounded digital citizens.”

But Koabel had plenty of fun setting the Glass on a maiden voyage for himself. He began by video-calling his wife to show her Griffin Hall through this brand new toy.

“She was able to see what I was looking at, so I was able to give her a virtual tour of the building,” Koabel said. “One of the cool things it can do is mirror what you see when it’s paired up with an Android device,” explained Koabel, “if you have the app.”

After enduring the curious stares of many confused onlookers, Koabel was eager to pass along the device to students.

“Something like this is kind of hard to demonstrate to others because you just have to put it on your face,” he explained.

Koabel was pleasantly surprised by a number of features he didn’t foresee Glass being useful for.

“One of the things I didn’t expect to care about much was just having news instantly sent to me,” Koabel said.

Like many social media devices, the Glass is able to pick up on its user’s most frequent interests and deliver news on related topics instantly.

“It keeps you connected,” Koabel said, “and if the battery life was better, you could always be connected.”

The short battery life isn’t the only drawback to the Google Glass. Ethical concerns over someone’s privacy have come into question as well.

“One of the issues is, although it’s nice to have a camera, people don’t like having one stuck in their face,” Koabel said. “There’s no light or indicator on here to let you know if you’re being recorded.”

He said the light would take away some of the power on it, but it might become more widely adopted if Google added a little dot on there, or if they just didn’t have a camera at all.

And it’s exactly this widespread adoption that Koabel is hoping for; not just for the public at large but also for the students he comes in contact with on a daily basis.

Branden Middendorf, current president of the MINjas and senior media informatics, came into contact with Koabel through a mutual love for video games and has given the Glass a test-run himself.

“There’s a lot of really cool features you can do with it, but right now it’s only Google’s apps that you can use,” Middendorf said.

But the app that really got his attention was the unique music capability.

“I loved it,” Middendorf said. “The big thing I really took from it was the speaker that they have on it. It’s a piece that goes back behind your ear because the music vibrates in your head.”

According to Middendorf, this particular piece of the Glass’ setup is especially exciting because it not only enhances the listening experience, but also allows the listener to engage in a casual conversation.

“I could be listening to music and be hearing it perfectly clear, but once I hear you talking, I’ll hear you before I hear the music,” Middendorf said. “It’s really neat; it just comes with this whole “hands-free” era that things are starting to come up with.”

It’s within this very trend that Koabel sees a lot of potential.

“With technology, it’s still kind of like the Wild West, everything is evolving so quickly – it’s like this gold rush,” Koabel said. “We’re all like digital 49ers, you never know what’s going to boom or bust.”

Whether the future of Google Glass is booming or busting, it’s certainly caused quite a stir in the COI for the time being.

As Koabel continues his career as director of creative technology, the Glass’ role in this continuum is still to be determined. But the role of technology in modern education is without question.

Our next set of educational tools may continue to appear on a large screen or just under our fingertips, but there’s a good chance it could appear in our peripherals in just the blink of an eye as well.