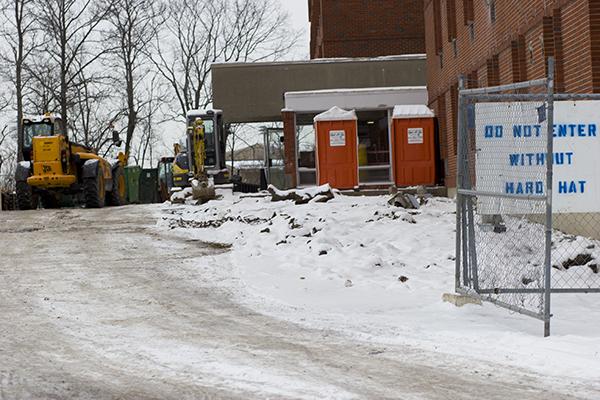 The future site of Northern Terrace is currently under construction. It will feature 47 rooms.

Everyone enjoys something new, and in the NKU community that thing is Northern Terrace– the university’s newest residence hall that is scheduled to open Fall 2014. And, with priority registration approaching on Feb. 1, students have a chance to nab a bed months before the dorms open.

The building used to be a deteriorating retirement home in need of renovations called Lakeside Terrace, before NKU purchased it in the summer of 2013, said Director of Housing Arnie Slaughter.

According to Larry Blake, assistant vice president of Facilities Management, the city of Highland Heights approached NKU with an offer to sell the property early last year, and the deal was closed in the summer.

Blake said since then, NKU has been working on plans to renovate the building and construction began January 2014.

Slaughter said Northern Terrace will house about 188 students in its 47 rooms, and will be open to students of all ages. The rooms measure 900 square feet, which is larger than the current facilities of Norse Hall and University Suites, which measure 700 square feet for four students.

Blake said that once the project is completed, the renovation and purchase of Northern Terrace will have cost the university $9 million.

“When we get done, we will have right at $9 million invested in the building,” Blake said. “If we were to build the same quality building for the same number of students, we would spend at least twice, if not three times that.” He added, “We will have a very high quality dorm when we’re done.”

Slaughter said the six-floor residence hall of Northern Terrace will have amenities on every floor. Such as laundry facilities, community kitchens and study lounges. Each room has an open floor plan designed for four residents and includes two full bathrooms and partially separated bedroom and living spaces. Each room will come with four beds, dressers, desks and closets and all of the furniture is mobile.

“It’s very flexible, nothing is fixed or nailed down… it really is an open environment for the students,” Blake said.

Students will also have access to the amenities of Callahan Hall, including the Bistro dining hall and shuttle service.

Slaughter said NKU’s attraction to the building lay mainly in its location next to Callahan Hall. Because the building is right next to NKU’s newest dorm (opened in 2010), the two communities will be able to share amenities and services, creating a larger learning community outside the Residential Village.

Housing hopes to create a connected community between the residence halls of Callahan and Northern Terrace, so the final touch will be a green area between the buildings, with benches and trees to encourage students to have a shared outdoor recreation area. To do this, Housing must take out several parking spaces between the dorms.

Kristian Johnson, SGA’s chair of University Improvements, said students will have plenty of parking space in the lot at the bottom of the hill next to Callahan.

When the university opened Callahan Hall four years ago, it added approximately 400 beds, according to Arnie Slaughter, but this has not been enough to house every student that fills out a housing request.

“For the last five years, we’ve opened at above capacity,” Slaughter said. “This was an opportunity to house 88 students temporarily.”

Students have until Jan. 24 to fill out friendship clusters for 4-person dorm rooms, and until Feb. 1 to apply for priority registration.

To sneak a peek at the room layout in Northern Terrace, check out the display outside Housing’s office in Norse Commons.