What will NKU’s new tobacco policy mean for violators and those trying to quit? 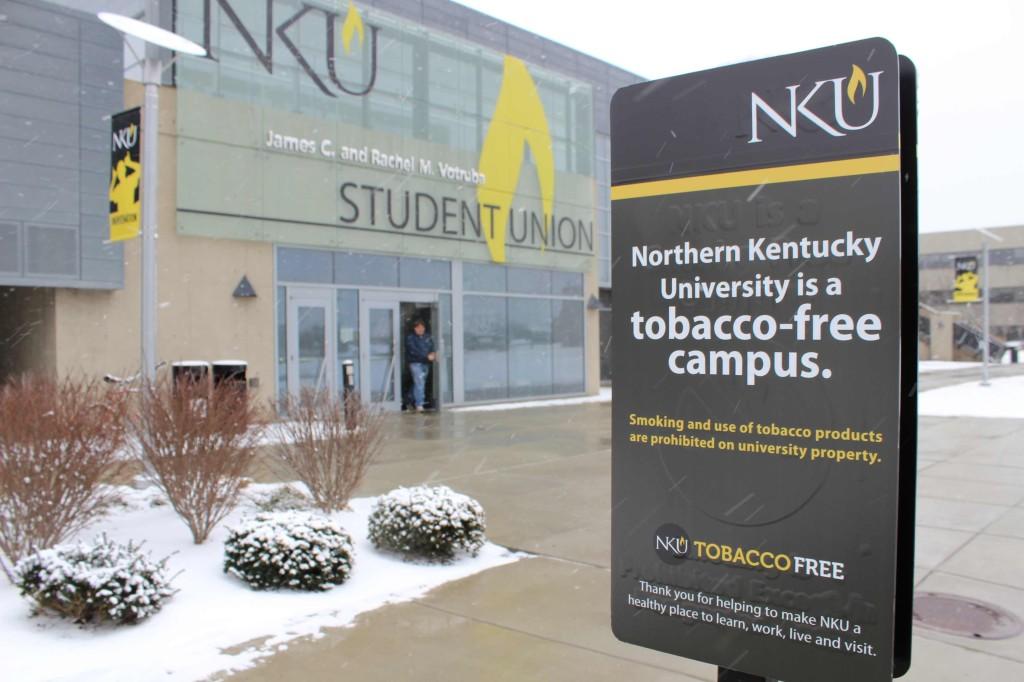 Tobacco-free marketing near one of many former smoking hot spots on campus. On January 1, 2014 Northern Kentucky University became a tobacco-free campus.

As students, faculty and staff made their way back to campus for the new semester, the tobacco-free policy has changed and continues to change the dynamics of daily routines for many of the campus’ tobacco users.

But what will the repercussions be for those who do not conform to the new policy?

According NKU’s Dean of Students Jeffrey Waple, first-time student violators will be required to take an online tobacco education course; second-time violators will have to meet with a hearing officer; and third-time violations will result in disciplinary action.

He added that violations for staff members are still being developed.

Training sessions are set up to take place on campus to learn more about the tobacco policy, according to Waple, who said the session would cover how to report violators, how repeat violators will be addressed and will also have a Q&A session.

“They are not training; they are information sessions for anyone on campus,” NKU’s Dean of Students Jeffrey Waple said.

The task force will also be looking for ambassadors from outside those who helped develop the policy to help enforce it, according to Waple.

These ambassadors will patrol campus looking for violators, he said.

Anyone can report policy violators on campus. An online form can be found on the tobacco policy’s site and through the policy’s hotline (859-572-SMOK).

Outakes will sell nicotine replacement items, such as nicotine patches and gum. Students and staff at NKU can call 1-866-845-9193 for two free months of NRT items.

Some may see the policy as that extra push to finally quit smoking. 20 million people try to quit smoking each year according to Debbie Patten, NKU’s allied health officer. Of that 20 million, only 7.6 percent of them are successful and the others all relapse within the first seventy-two hours, according to Patten.

“Don’t hate yourself for relapsing,” Patten said to any smokers trying to quit.

Tobacco isn’t addictive on its own, Patten said. Instead, she said nicotine– one of tobacco’s key components– is what makes it addictive.

Nicotine is a vasoconstrictor, which means it can cause the narrowing or opening of blood vessels. This attributes to nicotine’s addictive quality, according to Patten. She suggests taking a fifteen minute walk to increase blood flow and help with cravings.

Signs of nicotine withdrawal include decreased heart rate, fatigue, irritability, coughing, insomnia, constipation, depressing mood and increased appetite. Patten said those trying to quit can experience none to any combination of these symptoms.

Symptoms can begin as early as two to three hours after quitting, Patten said. They peak at three to four days and begin to diminish over the course of a few weeks.

To counteract symptoms, Patten suggests drinking eight glasses of water a day, cutting down on caffeine, getting more sleep, sticking to a schedule, not reading or watching TV in bed, surrounding yourself with non-smokers and stocking up on healthy snacks.

Making a list that identifies triggers can help smokers control cravings, according to Patten. These triggers can include times, places and emotions that can make some want to smoke or use tobacco.

If someone trying to quit relapses, it’s merely a slip-up and not a failure, Patten said. She said it takes the average smoker seven to ten tries before they’re successful.

Instead of punishing themselves for relapsing, Patten suggests reviewing their coping mechanisms and trying again.

“As with any habit, it takes about forty days or so to get that in your body’s practice. When I get stressed, instead of making that cup of coffee, I go get a carrot,” Patten said.

NKU is continuing its Healthy Monday Quit Clinics this semester. Participants can test their lung age, take an asthma and COPD screening test and speak with a respiratory care specialist.