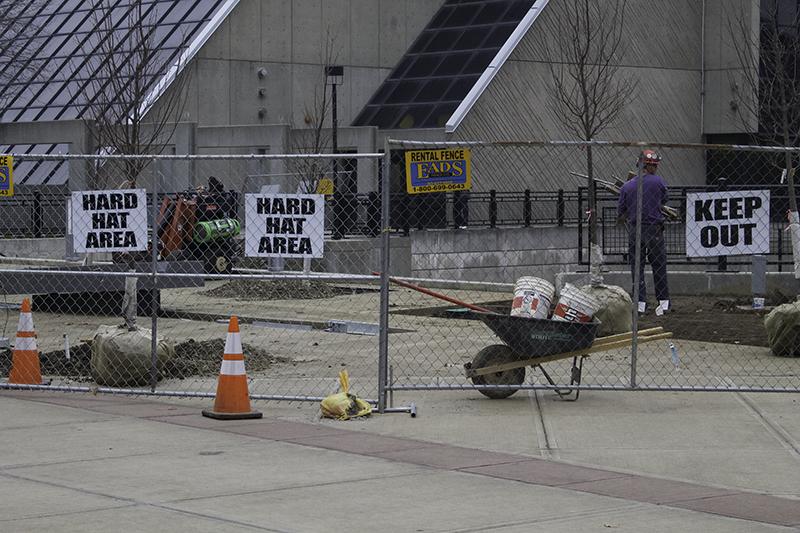 Plaza renovations are expected to stretch out through December.

With the end of the semester approaching, construction on the plaza in the middle of campus isn’t halting over winter break.

The construction began at the end of the spring 2013 semester, and has missed several projected completion dates throughout the fall semester due to weather. The $3.4 million project is now projected to be completed by the end of December, according to Assistant Vice President of Facilities Management Larry Blake.

Though the newest date of completion is projected for the end of December, junior computer information technology major Jay Futscher isn’t so sure.

“I feel like if they’re talking about weather delays, then the end December doesn’t sound like it’s going to work, but I’m glad they are redoing it,” Futscher said.

Futscher, who lives in and commutes from Wilder, hopes it’s finished soon so he can commute by bike again. He said that the construction around his neighborhood and on campus has made him have to drive to campus this semester.

“I’m so used to shooting right up through campus but now I just can’t do that, ” Futscher said.

“When we had our orientation tour, we couldn’t go through the center of campus, and it really made things confusing, ” Porter said.

Though the construction will continue until at least the end of the year, some of it has been completed according to Blake.

“The area around the flagpole was really something we wanted to get done, especially before Veterans Day so everyone could make it to the Veterans Day ceremony, and it did get done,” Blake said.

Parts of the renovation have been completed, including the fountains and multiple walkways. Blake said that, weather permitting, the rest of the construction should be done before students return for classes on Jan. 13.