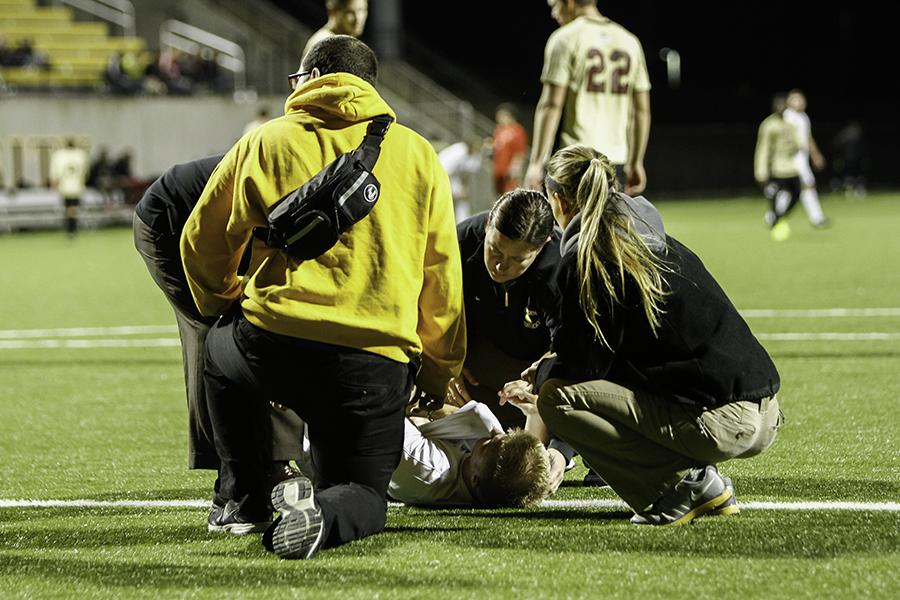 Athletes from the NKU athletic department encounter injuries, but with the careful preparation and help of NKU athletic trainers they are able to stay in the game.

“Really when it comes to sports medicine, we have always treated and prepared our athletes like they were Division I players,” said Molly Hutson, head athletic trainer.

Her main focus has not only been on all athletics, but specifically cross country and men’s basketball.

Different sports cause different injuries and some are very particular. The most common collegiate sport injury seen by the staff has usually involved the knees. Another common issue is previous injuries, either from high school sports or time played on another collegiate team.

The athletic training staff and department take pride in helping athletes and giving them all the resources possible to succeed and recover. These resources include a wide range of staff, proper training equipment, several kinds of therapy and team orthopedic surgeons, James Bilbo and Forest Heis. The athletic department is also provided with sports psychiatrist Marc Toennis.

“The only issue the staff faces is time,” said Hutson.  “The teams are traveling more so we have to work around busy schedules. I connect with them by making it fun.”

Athletes have developed relationships with their trainers and have become stronger and well-conditioned because of the athletic training staff.

“You have to, as a trainer, emphasize with injured athletes because playing a collegiate sport is their life, it was what they came to college to do,” said Hutson.

From ice baths to electric pulse therapy, athletes respond differently to treatment but essentially, it comes down to persistence and hard work to recover. Without the athletic training staff, scheduled rehab and a specific injury recovery plan, athletes would not be able to play or never recover properly. Improper recovery can lead to further injury and further complications for the athlete’s body when older, according to the athletic training staff.

“Everyone expects instant recovery but if the athlete does not put in the time given for therapy or rehabilitation then they cannot be released,” said Abby Potts, an athletic training student for NKU.

Potts is currently in the athletic training program and is developing as a trainer in her clinical.

“The most difficult thing is telling an athlete they cannot play,” she said. “They don’t understand sometimes because all they want to do is play, but I know if they do they will end up right back where they were, if not worse.”

NKU offers other useful resources for athletes and the student community. One resource is through social media sites Facebook and Twitter. The strength and conditioning staff post live tweets and Facebook statuses daily about recovering from a sport or how to develop proper nutrition. The staff can be followed on twitter @NKU_strength or on their Facebook page named Northern Kentucky University strength and conditioning.