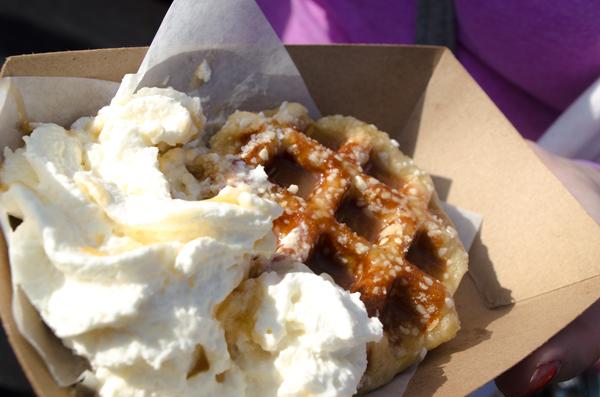 Some birthday presents are boring, and some inspire. In the case of visual arts professor Martin Meersman, a waffle maker for his birthday about 3 years ago inspired an entire new life venture.

Meersman loved to bake, and with his Belgian heritage, he decided he wanted to learn how to make his very own Belgian waffles. With great determination, Meersman figured out what kind of waffles he wanted to make.

“I found a recipe and tweaked it, made it my own. About 2,000 waffles later we had a great recipe,” Meersman said.

Meersman began taking the waffles to different family functions, and faculty events. From there, the delicious breakfast pastry grew like wildfire. People began requesting the waffles and wanted to know if they could buy them.

The question then became, “how to distribute them?” Meersman considered opening a restaurant or just working from his kitchen, but then came up with the perfect idea. In college when he first met his wife, he was working at a trucking company and so he decided the best way to distribute would be a food truck.

And so Marty’s Waffles was born.

“It was never about what can we sell, it was about the joy,” said Julie Mader-Meersman, graphic design professor and Meersman’s wife.

Marty’s Waffles aren’t just any waffle Meersman explained. They’re a speciality kind of Belgian waffle called a liege, which is named after a city in Belgium. It is a dough based, more dense waffle, “not like the kind you’ll get at Perkins or IHop,” explained Meersman.

He only makes the one waffle, but offers a range of toppings and compliments, such as sea salt and caramel or peanut butter and banana. Meersman says they make all their own ingredients; they whip their own cream and make their own vanilla extract from Kentucky Bourbon.

“Our customers really have an appreciation for the handmade, to know where it’s all coming from,” said Meersman.

Meersman even bought a shell of a truck and built it into what it is now, along with help from alumni and friend Pete Hall, who’s been there throughout the whole process.

While they only began taking the truck out in September, “it’s really taking off” said Meersman. They began working with Night Owl Market, a group that sets up food trucks in downtown Cincinnati and outreaches to other suburban communities to do the same. Through Night Owl Market, they’ve made frequent trips to the Whole Foods Market and Harley Davidson dealerships, as well as parking at the Cincy Beer Fest, and the Merchants and Musical Fest. According to Meersman, the success has happened largely through word of mouth.

Julie accredits her large family and friends from the area, and Meersman also gives credit to his students who’ve spread the good word after he began bringing waffles in as an end of semester celebration.

But along with the word of mouth, there had to be a look that drew people in as well.

“Most definitely, Julie gets all the credit for the actual exterior of the truck. It’s gotten so much praise from everyone that sees it,” Meersman said.

Julie designed a truck that she said was “about the waffle” and the experience that Martin hoped people would get when they ate the waffle. He wanted a retro style look, that Julie described as “the sense of the milkman truck.” A truck that exuded a more person to person, joyous feel.

It also needed to set them apart from the other Belgian waffle maker in town. Julie wanted people to know Meersman was “legit”.  So in the design she featured a photo of Meersman’s great great great grandparents Ino and Mathlede Hooste in Belgium, 1860 to show his heritage.

“The care that he puts in the waffle needed to come through in the design,” Julie said.

Meersman does put a lot of care Julie said, and she believes his varied background really is what makes it all a success.

“The expertise that his sculptural background brings to the craft of the product is very distinctive, very important and unique,” Julie said. “It’s practically unattainable to repeat and duplicate because of the care in his making process.”

Meersman loves working on the food truck. He said he appreciates every customer and says that that interaction makes it like a whole new family.

“Seeing the instant gratification from people who have the waffles, the facial expressions, the smiling kids who come up to the window; that’s my favorite part,” Meersman said.  “Knowing we’ve done something right with what we’re making.”

“After 44 years of being alive, having fun and giving back is what it should all be about,” Meersman said.

If you want to try Marty’s Waffles check out their Facebook page for updates on where to find their truck.