From maintenance to law, Mearns has done it all. 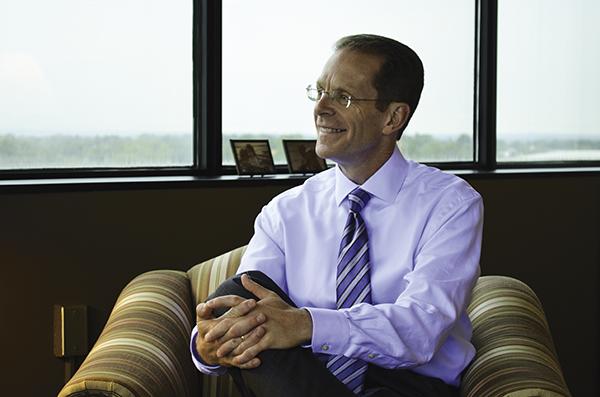 Mearns was hired to be Ball State University's 17th president.

Geoffrey Mearns has never been one to shy away from opportunities. From working hard on a maintenance staff, to prosecuting the Italian mafia in New York City, to becoming NKU’s fifth president, opportunities are something Mearns feels are very important; something not to be wasted.

In the summer between his junior and senior years at Yale University, where Mearns earned his Bachelors of Arts in English, he worked on the maintenance staff at an apartment complex in Cleveland, Ohio.

“They were wonderful men that I worked with, but none of them had had the educational opportunities that I had,” he said.

Mearns said that particular summer taught him two things: “I realized that I was fortunate to have an opportunity that these other people had not been given, and so I didn’t want to squander the opportunity that I had been given.”

Mearns said that despite having opportunities that these men did not, his coworkers welcomed him in.

Originally, when Mearns began his undergraduate studies at Yale, he was studying to become a doctor, because the institution wouldn’t accept his English Advanced Placement credit from high school, according to a speech Mearns gave for the Viva Humanities lecture series on Sept. 18.

This didn’t last very long for Mearns, though.

In his freshman year, he said he took an introductory biochemistry course which changed everything.

“I was listening to the professor speak, and there were about 150 students in the auditorium, and I had no clue what he was talking about,” Mearns said. “I literally got up from that class in the middle of the presentation. There was a problem that we were all supposed to be working on, and I didn’t know where to begin. I got up from that class, walked out of the room, walked down Science Hill to the registrar’s office and dropped biochem, and for the next three and a half years, loaded up on English and history.”

Mearns said he feels like others’ lives are better because he walked out of that class.

“[My] fear is, if I had stayed in pre-med, I might not have been a particularly good doctor,” Mearns said. “And as it’s turned out through my service as a lawyer and now my opportunity to serve in higher education, my hope is that my service is contributing to the well-being of others as well.”

After graduating, Mearns taught English at Delbarton School, a small private high school in Morristown, N.J., between August 1981 to June 1984. “I was making about $11,000 a year, and so I know that many of our students and recent graduates are struggling to make ends meet, and I understand that.”

During this time, to make more money, Mearns wrote technical manuals for Saab cars, just to be able to afford the cost of living. Mearns said it was a good way to utilize his writing skills.

After several years, Mearns went to the University of Virginia School of Law, graduating in 1987.

Several years later, Mearns said, there were openings in the federal Department of Justice that allowed “a large number of relatively inexperienced, but ambitious, young prosecutors” to work on high-profile cases.

In his time with the justice department, Mearns worked against the Italian mafia in New York City.

“That experience stretched me and challenged me in a way, intellectually and in other ways, that I had never been pushed before,” he said.

In his time practicing law, Mearns also worked on the government’s team for the prosecution of Terry Nichols, Timothy McVeigh’s conspirator in the Oklahoma City bombing in 1995.

Mearns was surprised to find himself in the higher education world.

“I was happy practicing law,” he said. “I found it challenging and rewarding on many levels, and the opportunity to go to apply to be the dean was not one that I had sought out.”

Mearns said he was contacted by the search committee that was looking for a new dean.

When Mearns became president of NKU, he said it was a similar process. He was contacted by the search firm, Isaacson Miller, in early 2012, and said that as he began looking more and more, the school looked better and better.

Mearns said his father was the first person in both his family and his wife’s to graduate from college. “That experience, the opportunity that he was given, not only transformed his life, but transformed our whole family’s life.”

What did all of these experiences teach Mearns?

“It’s important to have a direction and to have a plan, but it’s also important to balance that with the flexibility and being open minded to see what opportunities arise, because you never know when taking an alternate path can lead to some pretty exciting places,” he said.

Growing up, Mearns wasn’t entirely sure what he wanted to do for his career.

“My father was a law professor, and several of my siblings became lawyers, so that’s why I say I kind of went through college thinking that that was likely to be where I ended up,” Mearns said.

However, he added that he doesn’t remember a single moment where he knew what he wanted to do for a living.

“I’m too old to even remember [what I wanted to be],” Mearns joked. “Except for the fact that I eat almost the same breakfast every day, I wouldn’t be able to remember what I had for breakfast this morning.”