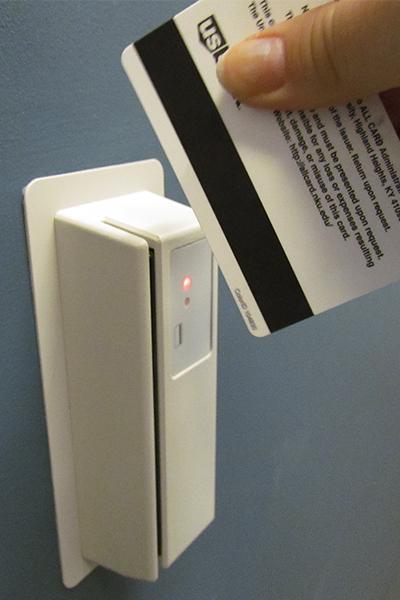 NKU will soon be spending $550,000 to outfit most buildings with AllCard swipe access points on exterior doors, such as those found at each of the dorms, replacing the traditional locks.

According to University Police Chief Jason Willis, this has the potential to help police lockdown the campus in the event of an active shooter on campus, such as what happened at Virginia Tech University in 2007.

There have been 387 school shootings in the U.S. since 1992, according to StopTheShootings.org. The majority of the victims have ranged in age from 10 to 19 years old, followed by 20 to 29 year olds.

School violence doesn’t stop at shootings, though. The violence ranges from burglary at Creighton University in Nebraska to sexual assault at NKU to stabbings at Salem State University in Massachusetts. Campuses across the U.S. are instituting ALICE training and other learning avenues to better prepare students, staff and faculty for the unthinkable, but will that be enough to stop it if it happens?

NKU has been implementing initiatives aimed to prevent such acts by bolstering the safety of the campus and its residents with various safety initiatives.

One such initiative involves NKU fitting most buildings with swipe card access systems, which will cost the university $550,000 and will start in November, according to Jeffrey Baker, the project manager and university environmental safety coordinator.

The system is still in the early stages and exact details and vendors are still to be figured out, but the final system will be operated and monitored from a centralized control point by University Police, giving them the capability to “lockdown a building in seconds remotely,” according to Willis.

“There may be situations where this system could facilitate a lockdown during an active shooter situation,” said Willis, “Not necessarily to contain a shooter, but to keep one out of a building.”

Willis said that without the exterior door card access system, locking down a building within seconds during an active shooter situation would be “almost impossible to do manually.”

In the event of an incident that could require action remotely, Baker notes that police will “use all tools available–cameras, phone calls and police on patrol–to make a decision about instituting a lockdown.”

“The personal safety of our students, faculty and staff is the top priority,” Willis said. “When we talk about these automated door lock systems we look at all the advantages that they bring, keeping everyone physically safe first and foremost. Secondarily, we look at the benefits these systems bring to the physical security of our buildings and the materials in those buildings.”

The system is also aimed at facilitating easy access to buildings after hours.

“Ease of access is important also for those who use the buildings after hours,” Willis said. “The swipe lock system will give us the ability to lock and unlock doors remotely. We would also be able to program who specifically has access to certain buildings, which is especially important for after hours.”

Willis also said the capability to control the security of the buildings remotely allows officers to focus their efforts elsewhere.

The building doors will be programmed to open and close at specified times mirroring normal business hours, and Baker said that individuals requiring after hour access will be able to gain that by requesting access through key control, much the same way they can now through the procedures found online.

“The door access system will make this [key issuing] process easier because keys do not have to be issued,” Baker said.

It is still unclear if the interior doors will be linked to the final system and able to be controlled by University Police. Also unclear is how the overall control will be performed.

“I can tell you that our preference is to have the capability to lock one door, one building or the entire campus through the system,” Baker said, “but the actual function will not be known until a vendor has been selected.”

“In a perfect world, a swipe on every door would be great,” Willis said. “But, installing the swipe system on the exterior door is an excellent start and a great improvement.”