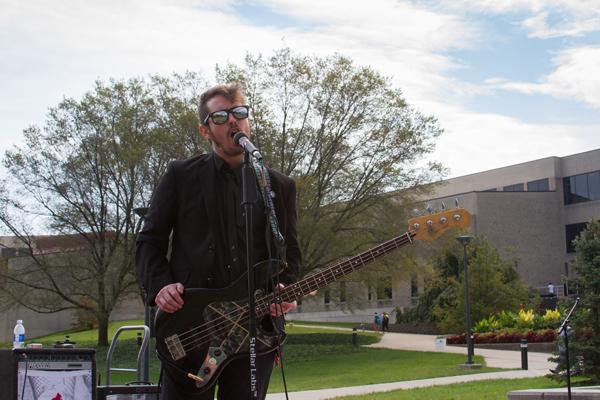 The rock tunes and mellow grooves wafting through the airwaves this week around NKU and downtown Cincinnati are a mixture of stand-out music from local bands and talent traveling from L.A. to London to gather for the 12th annual MidPoint Music Festival (MPMF).

Over 170 musical acts will play at 16 venues across downtown Cincinnati and Over-the-Rhine from Sept. 26-28 to represent the music festival’s largest and most diverse lineup yet, according to this year’s MPMF official guide.

In addition, various MidPoint bands have been showcasing their talent to a more private audience throughout the week at NKU’s amphitheater.

“It has become very attractive to the music industry [and] artist management; artist agents want their new artists at what they consider a taste maker’s event,” said Dan McCabe, MidPoint’s artistic director this year, who has been involved for six years. “It’s about the talent. That’s what the festival is. It’s about exposing new music. Exposing new genres of music.”

The volume will be turned up throughout the city for a sound and atmosphere that McCabe describes as “uniquely Cincinnati” and “very, very vibrant.” Last year, 27,000 people attended the event; this is a leap from the 13,800 in attendance six years ago, according to the MPMF website.

The venues will range from Blue Wisp Jazz Club on Race Street to Grammer’s Stage on Main Street, and many spots in between. In addition, Washington Park holds a main stage in Over-The-Rhine that “expands our [Midpoint’s] capacity to host a lot of people from the region,” according to McCabe.

MidPoint is an investment in the community, such as OTR, because it brings and introduces thousands to the area; people make “a mental note” about the place and many return, McCabe said.

As a festival with a focus on discovery and artists who challenge musical boundaries, the official guide warns “don’t come looking for straight-up versions of any particular genre.”

From Hip Hop and Pop to Jazz and Indie Rock, genres across the board will be packed into the three days downtown. Assorted acts from around the area will play, such as Indie Rock band DAAP Girls and Chamber Folk act Allan Pray.

Reflecting the growth and diversity of the festival, different parts of the world will be represented from groups hailing from London, U.K., and Seoul, South Korea. On its first U.S. tour, the Korean-based electronic rock band based, Love X Stereo, will be performing Friday and Saturday.

To draw in students and get more people involved at MidPoint, local bands are jamming at NKU’s amphitheater throughout the week. Indie rock groups, Saturn Batteries and DAAP Girls, along with noise pop group Tweens, gave students a preview of some of the music they could hear throughout MidPoint.

Us, Today, a local experimental jazz trio, plays at the amphitheater on Thursday followed by The Ridges, an indie and folk rock band from Athens, Ohio, on Friday.

The previews are meant to give the NKU community a taste of what they would encounter at MidPoint and attract new people to the festival.

“This [the festival] really speaks to college kids because they actually do have their fingers on the pulse of what the next best thing is,” said Kenneth Wright, CityBeat events director, who is involved with MidPoint. “It’s really great to get them down here and see what they like.”

The university preview goes along with the festival’s new mission to draw in a variety of ages to the area throughout the event. College kids can drink and discover new tunes alongside other fans or newcomers.

“We have stages now that really allow for all ages attendance,” McCabe said.

Midpoint Midway is such a space for people of all ages to find music, food and beverages on 12th Street, between Vine and Walnut. Midway serves as “a preview of what you are missing out on” at the rest of the MidPoint festival, Wright said.

New to the scene this year is KidPoint, which will take place on Sept. 28 at Midway. This is the first time the festival has catered towards families and getting people of all ages down to Midway all Saturday afternoon, according to Wright.

Also new to Midway is the ArtWorks ArtCars, a project that recruits youth and professional artists around the area to transform different vehicles into “mobile masterpieces,” according to the MPMF website. Five rides will be given a new look this year.

Founded by local musicians Bill Donabedian and Sean Rhiney, the festival launched in 2002 showcasing mainly local or new talent. In 2008, CityBeat acquired MPMF and began to change the brand of the festival; they built the brand name up in order to attract young artists and eventually a more national audience, according to McCabe.

“We’ve gotten very successful at building that brand on a national scene,” McCabe said.
“The talent has gotten a lot better.”

Music lovers can still purchase an All Music Access ticket for $69 for access to all the shows and venues for the full festival time. One Day Passes are also an option each day and cost $35.

At Washington Park, tickets for all ages cost $22 at the gate on Thursday and Friday, and $27 on Saturday. Grammer’s stage offers shows for those 21-and-up that cost $20 Thursday and Saturday, and $15 on Friday at the door.

“It’s also very important that Cincinnati markets itself to the region as being an arts and cultural mecca; it needs to include not just the traditional art institutions…but it needs to consider its local music scene as a resource, as something to crow about,” McCabe said.