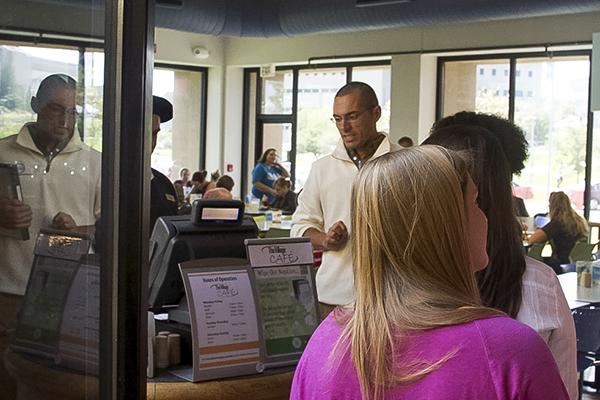 Students in university housing will see big changes next fall in Norse Commons, according to Robert Knarr, the university project manager handling the renovations of the facility.

“The overall scope of the project is to convert and upgrade the existing kitchen and dining spaces to a more modern and integrated food venue,” Knarr said. “The kitchen, servery and seating areas will all be fully renovated with five to six new food station concepts and some surrounding spaces will be repurposed and relocated to better utilize the building areas.”

The overall project is still in the development stages, and as Knarr notes, nothing is yet set in stone as to exactly when it will start, or how it will be completed. Dining facility renovations are expected to begin sometime between spring break and May 2014, and are scheduled to be completed in August. Regardless of when it starts, the dining facility will be closed for the entire duration.

It is possible that the project could start around spring break to ensure its completion before the start of the following semester, and it could end up necessitating the relocation of food services for students that normally utilize the facilities in Norse Commons, said Arnie Slaughter, director of university housing.

“The idea is to work closely with campus partners to preserve the all-you-can-eat capability that students have now,” Slaughter said. “We want to provide [residents with] something similar to what they have now.”

If alternate dining options are needed, Slaughter said there are plans in place to ensure that something will be provided to students, outside of the dining facility.

Regardless of when the project starts, it will remain closed during the summer and won’t have normal dining options available.

“Norse Commons is typically closed during the summer months,” Knarr said. “So there should not be a need to provide any temporary dining facilities during its four or five months closure.”

Slaughter stresses that Housing will work with partners to ensure food options are available for summer operations like orientations and other summer functions.

Among the planned food station concepts outlined by Knarr are a deli station, a pizza station, a Eurasian grill similar to a Mongolian grill, a pantry station similar to a hotel continental breakfast area and a fresh market section with soup and dessert.

Also included in the plan are new finishes throughout the main dining, seating and lobby areas; upgraded lighting that helps change the dining experience throughout the day and evening; and mechanical and electrical system upgrades and renovations to support the new layout and space configuration.

“The renovations will be amazing, to put it into one word,” said Student Government Association President Erik Pederson. “As far as enhancing the dining experience, it’ll be a lot easier to get in and get out.”

Pederson said he is excited for the renovations, because they will add to the variety of food that students can get.

“I get sick of pizza,” Pederson said. “I like to have different food options available.”

The budget is currently estimated at $3 million according to Knarr. Pederson said the renovations are aimed mainly at the overall dining experience, and are a “necessary expense.”

“From what I understand, the budget sounds about right,” Pederson said. “They are gutting the inside of the commons to get the building up to where it needs to be.”

Knarr however, notes that nothing is a guarantee yet, in regards to the finalized project.

“Design efforts are still ongoing and nothing is set in stone yet,” Knarr said. “But, the scope is not a complete building renovation; only select spaces to support the overall design changes of the primary kitchen, dining and seating areas.”

According to Slaughter, the housing office will most likely need to be relocated to the Suites or the main campus, or even split to both areas, in order to retain its own operations.

“There will be some level of inconvenience,” said Slaughter, “but it’s all for students. It may be a hybrid of operations, with one office in the main location and one in the existing location.”

“The mechanical and electrical upgrades should result in lower energy consumption for the building as a whole, just from the inherent energy efficiency of more modern products and systems,” Knarr said. “The majority of the existing food service equipment will be replaced as well, and this will save on recurring maintenance of the existing equipment.”

Though the entire building is not receiving an update, some of the other areas may need to be relocated in order to facilitate the renovations planned, according to Knarr.

“The current project scope focuses mainly on the existing food servery, dining and seating areas of the building,” he said. “But, some surrounding spaces will also be reworked to support the layout rearrangement. The existing large meeting room will likely be relocated to the existing fitness area room and some of the support offices will be relocated into the existing convenience store space.”

Knarr notes that all of the planned renovations are meant to upgrade and enhance the student dining experience; similar to what is provided in the Student Union.

“The new planned food venue station concepts are more generational-specific, and should modernize the overall experience into a facility more expected for a thriving college campus like NKU,” Knarr said.