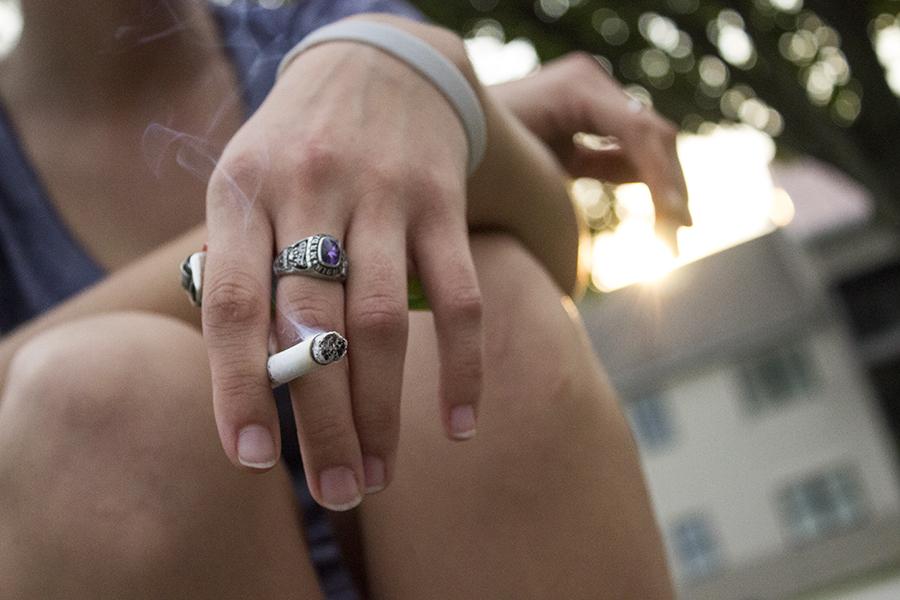 Freshmen coming to NKU’s campus this fall have to adapt to college life as well as the university’s enforcement of the new tobacco-free policy beginning in January 2014.

Though the ban affects the NKU community as a whole, freshmen smokers living on campus this year are impacted by the stress entering college brings, on top of learning to live on a tobacco-free campus.

Kayla Brown is one of these new students entering an unfamiliar environment with a habit the university does not support. As a freshman chemistry major, Brown will soon be forced to find a new spot to relieve her anxiety or a completely new way to cope with the stress college unloads each day.

“Everybody knows [smoking] is bad; if you don’t, you’re just a dumbass,” Brown said.

“I mean it’s a stupid thing to do, but at the same time [it helps] those who have anxiety. That’s why I started to smoke, because it helped with my anxiety.”

It becomes obvious Brown is not alone in this self-medication method when walking throughout the campus each day. Whether it is a picnic bench on a hill or a gazebo next to a dorm, students can be seen congregating in certain “smoking spots” soon after classes commence each semester.

“I personally do not think they can enforce [the ban],” Brown said. “I guess if it was just a few people, it wouldn’t be that bad. But, since there is so many, it’s going to be super hard to enforce it…Hell, there are professors that smoke.”

Every year, more incoming freshman around the country are confronted with the reality that a habit they developed before college is not welcome on campus. At this demanding time in their life, many freshmen are forced to decide whether to change a sometimes significant aspect of their daily lifestyle or to ignore the ban and face the possible consequences if caught.

As a full-time chemistry major and resident of Woodcrest apartments on campus, Brown said she chooses to deal with the official tobacco-free enforcement next semester by trying to kick the longtime habit, instead of throwing “a big bitch fit” about the ban.

“In a way it’s good because it is going to cause me to quit [smoking] even if I may not want to,” she said.

However, Brown’s decision to quit was not directly inspired by the ban, and she does not believe the ban will inspire other student or staff smokers to quit. Quitting has to be a personal decision or it will not stick, she said.

“You have to really want to improve yourself on your own, not… be told by a campus to do it,” she said.

A Spring 2011 survey, presented by the Wellness Center, revealed that approximately 89 percent of students and staff at NKU do not smoke. Of those who do smoke, the study revealed that 75 percent want to quit.

When returning home after a long day of classes, many students look for ways to unwind and regroup before taking on the additional demands of their life in college.

While some students’ vice of choice to cope and comfort themselves might be heavily drinking or getting lost for endless hours in a video game, Brown chooses to relax and refocus in her “smoking spot” outside her home on campus.

“[Smoking] keeps me calm; it keeps me centered,” Brown said. “When I’m stressed out it helps me refocus.”

Many factors play into people’s decision to take that first drag. Genetics, peer pressure, advertising and anxiety disorders can all influence a person’s choice to smoke.

Brown’s addiction began while she was in high school as her way to help relieve the anxiety in her life. She feels smoking provides her with an alleviation from the stressors and concerns she experiences daily.

Smokers with a history of anxiety disorders have a more difficult time quitting smoking, according to a study conducted by the University of Wisconsin-Madison Center for Tobacco Research and Intervention.

Megan Piper, a lead researcher for the study, believes smokers with anxiety conditions might find less success using quitting methods, such as nicotine patches or lozenges. These methods satisfy the chemical part of the addiction, but they do not address the emotional addiction component anxious smokers need to quit.

She is one of many young adults throughout the nation that picked up smoking as a teen and entered college addicted. Though people claim to smoke in order to reduce their mental health symptoms, many usually start lighting up before the problems that have them reaching for a cigarette arise.

In 2010, 24.8 percent of full-time college students between the ages of 18-22 were current smokers, according to 2012 Surgeon General’s Report on Preventing Tobacco Use Among Youth and Young Adults.

Each day, about 3,900 youths that are under the age of 18 try their first cigarette; 950 of these children will end up regular daily smokers, according to a U.S.

Department of Health and Human Services 2008 National Survey on Drug Use and Health.
The younger people are when they start using tobacco, the more likely and more heavily they will become addicted to nicotine, according to the American Lung Association.

Very few people start smoking after age 25, according to a 2012 Surgeon General Report. The report indicates that 88 percent of adult cigarette smokers who smoke daily started by age 18. Similar to a student’s experience as a freshman taking the next step in their life, “this is a time in life of great vulnerability to social influences,” according to the report.

For some, like Brown, cigarettes become a form of self-medication and a routine that is tough to break at this time in a young adult’s life.

“[Quitting] is going to be tough,” Brown said. “I hope I can do it, really. But, at the same time, I don’t know how it’s going to work out because I am an anxious and nervous person and it helps me calm down.”

A cigarette provides a range of relief for smokers, from reduced tension to a raised sense of well-being, according to Dean Lillard’s “Smoking as Self Medication” research presentation.

Brown and other smokers react to the chemistry of the chemicals released into the nervous system by nicotine. For a short period of time, the nicotine can work to mitigate anxiety and depression symptoms.

Those who take up smoking in response to a high stressor in their life, may find that it’s not easy to quit once that stress passes, according to the Cleveland Clinic.

This stress relief tool becomes a psychological and chemical “crutch”; smokers might start out battling a source of stress with nicotine, but many end up fighting the nicotine itself through their addiction.

Once the stress of college classes are over, she believes smoking will be easier to give up.

Research indicates that after 8 years following graduation, 75 percent of smokers that start in high school will still be using tobacco in some form, according to the American Lung Association.

NKU smokers are not alone when it comes to being skeptical about how effective the new ban will be and how it will be enforced.

Since 2009, the University of Kentucky serves as an example of another university in the state where the students have been adapting to the tobacco-free campus transition.

One UK student smoker and junior forestry major, Josh Robinson, does not agree with the tobacco-free policy. It is “one of those bans that sounds good but doesn’t have any real consistency or logical sense,” according to Robinson.

“It is completely ineffective. All it does is make the whole being on campus [aspect] more frustrating. That’s not going to help anyone not smoke,” Robinson said. “I don’t really feel that I have lost a right because it’s not stopping anybody [at UK] anyways.”

Like Brown, Robinson picked up this habit in high school and has continued to smoke for different reasons, such as anxiety, pleasure and the influence of peers. He has not stopped smoking despite attending a school with a tobacco-free policy.

Also, similar to Brown, Robinson has questioned some of the tobacco-free policy rules NKU and UK share.

“The ban includes things like smokeless tobacco that doesn’t have harmful effects to people around you,” Robinson said.

Brown said NKU is also prohibiting products that are not harming anyone except the user. The students both question parts of the policy banning products with no damaging effects for nonparticipants.

“I understand smoking affects other people more, like how they’d want to get rid of that,” Brown said. “E-cigarettes [or chewing] and stuff like that; I don’t think that should be a problem.”

At UK, the enforcement of the ban is not strong and people continue to smoke on campus without penalty, according to Robinson. He does not feel people will abide unless they start strongly enforcing the ban.

“[The policy] was a political gesture,” Robinson said. “[UK doesn’t] enforce it very well. They just wanted to be able to tell people, “Oh, we’ve got a tobacco-free campus.”

Both Brown and Robinson agree that designated smoking spots seem to be a better plan for universities.

“I think in general, most people would agree that having designated smoking areas on campus would work a lot better,” Robinson said. “It would help keep campus a lot cleaner. It would help keep smokers out of other people’s way.”

At NKU, Brown has witnessed smokers littering cigarette butts on campus and understands the university’s position on the issue.

“I think that’s disrespectful, and I see a lot of people doing that,” Brown said. “If everybody would just respect the campus and pick up after themselves, I think it wouldn’t be that big of an issue.”

Although individuals still have the right to choose whether or not to smoke in the end, more and more universities are working to make it a harder habit for students to pick up, or keep.

Universities have become common battlegrounds over tobacco use, or what the CDC calls the “single most preventable cause of disease, disability and death in the United States.”

These policies aim to support a healthy university environment, prevent littering and combat the tobacco industry’s target on young adults entering stressful college atmospheres, according to an online message from NKU’s President Geoffrey Mearns about NKU’s Tobacco-Free policy. The policies also work to deter those entering college from picking up an unhealthy habit or coping mechanism.

In 2011, Kentucky ranked number one in the nation with 29 percent of adults in the state who smoke compared to the national average of 21.2 percent, according to Gallup-Healthways Well-Being index.