President Geoffrey Mearns announced April 23 that former athletic director Scott Eaton “diverted” between $100,000-150,000 of athletic department funds for personal use over the last eight years. Eaton admitted, through legal counsel, that he used “deceptive means” to acquire the funds.

Mearns announced the financial misconduct through a letter sent to Board of Regents Chair Terry Mann, which was sent via email to the faculty, staff and students of the university.

Mearns said the $100,000-150,000 that was reported is the estimated total in Eaton’s admissions. The university will continue to investigate with law firm Dinsmore and Shohl to determine the accuracy of his estimates.

In the letter to Mann, Mearns said Eaton sought legal counsel after learning a financial review would take place. During meetings with Eaton’s legal counsel and NKU’s legal counsel, Eaton admitted to diverting the funds, according to Mearns.

Mearns said in a press conference that the investigation will also continue to assist law enforcement with finding complete information and ways to “strengthen our internal financial controls.”

“The university is a victim,” Mearns said, and because of that, he is asking that law enforcement seek the “full and prompt restitution to the university of all the funds and property that Mr. Eaton embezzled.”

“We deserve to be reimbursed and compensated for the financial loss … this was money that we designed to support our student athletes, coaches and everyone committed to the academic and athletic success of our athletes,” Mearns said. “I believe we are entitled to have Mr. Eaton repay us.”

Because of the “nature of the financial misconduct,” the university will cooperate in a federal criminal investigation of Eaton if the state decides to move forward, according to Mearns’ email.

At the onset of the investigation, Mearns said he would notify law enforcement if there was evidence of criminal conduct. Earlier today, Mearns spoke directly with Attorney General Jack Conway to inform him of Eaton’s financial review.

“The purpose of my call was to enable the attorney general to consider any investigation and prosecution of Dr. Eaton that he deems appropriate and warranted,” he said in the letter to Mann.

Currently, Mearns said he does not know if the attorney general’s office will proceed with an investigation.

Dusing said that Eaton is unaware of any criminal investigation.

“Dr. Eaton deeply regrets his mistakes and recognizes that his poor judgment has injured others, including the university as an institution,” the statement said. “While no excuse, the fact remains that difficult circumstances can lead good people to make poor decisions. Nonetheless, Dr. Eaton accepts full responsibility for his actions and is dedicated to doing whatever he can to make things right.”

Dusing was unable to comment further at the time of publication.

Eaton was terminated March 18 for being untruthful about inappropriate relationships with five women at NKU, one of whom is now a former student, over the a span of at least 10 years.

When Mearns was informed of ethical misconduct in early March, an investigation began that revealed the extent of Eaton’s misconduct. On April 5, the university began a financial review of the Athletic Department with the help of accounting firm Clark Schaefer Hackett.

In the letter to Mann, Mearns said Eaton sought legal counsel after learning a financial review would take place. During meetings with Eaton’s legal counsel and NKU’s legal counsel, Eaton admitted to diverting the funds, according to Mearns.

Letter that Mearns sent to Board of Regents Chair Terry Mann: 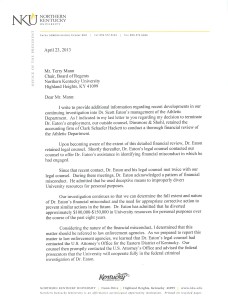 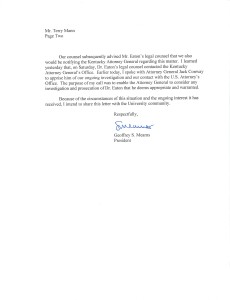 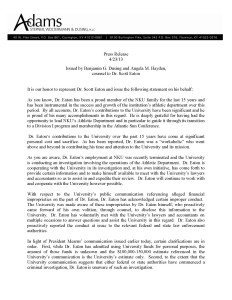 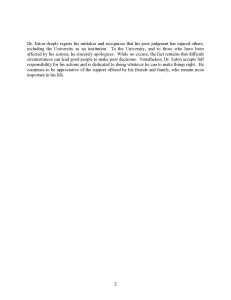