Former Athletic Director Scott Eaton, who was fired March 18, has admitted to “inappropriate, intimate” relationships with four university employees and one former student, according to a letter sent to the Board of Regents, students, faculty and staff from President Geoffrey Mearns.

According to the letter, Eaton supervised two of the women and three are no longer employed by NKU. Mearns did not comment on whether the former employees left the university because of Eaton’s termination or for other reasons, but no other disciplinary action has been taken. The student was in a class that Eaton instructed during their relationship and no longer attends NKU.

In an interview with Mearns, he said Eaton’s conduct spanned “at least 10 years,” but would not provide specifics on the individual relationships.

“Simply put, Mr. Eaton’s pattern of misconduct was inappropriate, it was unacceptable. He violated the trust that we all placed in him in the position of responsibility that he had,” Mearns said in a press conference April 5.

The move to do a financial review did not stem from suspicions of financial misuse, but it was the “next prudent step” in the investigation decided by the law firm, according to Mearns.

Eaton did not disclose information about these relationships before the initial investigation into his conduct, which ultimately led to his firing. In the letter, Mearns said Eaton acknowledged “this pattern of misconduct” and that it violates the university’s ethical principles and code of conduct.

For Mearns, this is a serious offense because of Eaton’s “significant responsibility” and he has high expectations for NKU administrators in top positions at the university, which Eaton did not fulfill. His pattern of untruthfulness prior to and during the investigation was a leading factor in Eaton’s termination, Mearns said.

Although Mearns did release this information to the university community, the letter stated that law firm Dinsmore & Shohl will continue to investigate Eaton’s management of the athletic department.

Accounting firm Clark Schaefer Hackett has also been hired to do a financial review of the department to ensure that “we understand the full scope of Dr. Eaton’s management,” Mearns said.

The financial review will take one month, according to the letter, and will determine if “any other corrective actions are necessary.” Mearns said the month timeline is an estimate provided by the law firm.

Mearns confirmed that there are still no NCAA compliance issues, legal or financial issues involved with Eaton’s termination.

The initial investigation into Eaton’s actions began March 8 after Mearns received allegations against the athletic director from outside the university. He was suspended March 12 and officially terminated March 18.

Eaton was appointed athletic director in 2009, and has been an administrator at the university since 1998. In 2007-2008 he served as interim vice president for student affairs.

In his position as athletic director, he helped lead NKU Athletics into Division I and played a major role in launching the $6 million Go Gold campaign.

“We were surprised and terribly disappointed,” Mearns said, who interacted with Eaton often in a professional relationship.

The university also recently hired Wright State University’s former athletic director Michael Cusack as the interim athletic director to serve during the search for a new director. Mearns said the position is set to be filled by the fall semester.

“Our athletics program, though, is strong. With the addition of Mike Cusack, as our interim athletic director, we’re even stronger,” the president said.

Copy of the letter Mearns sent to the Board of Regents today: 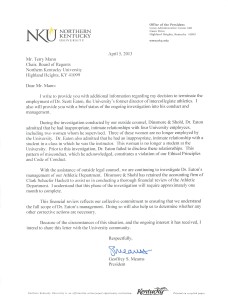