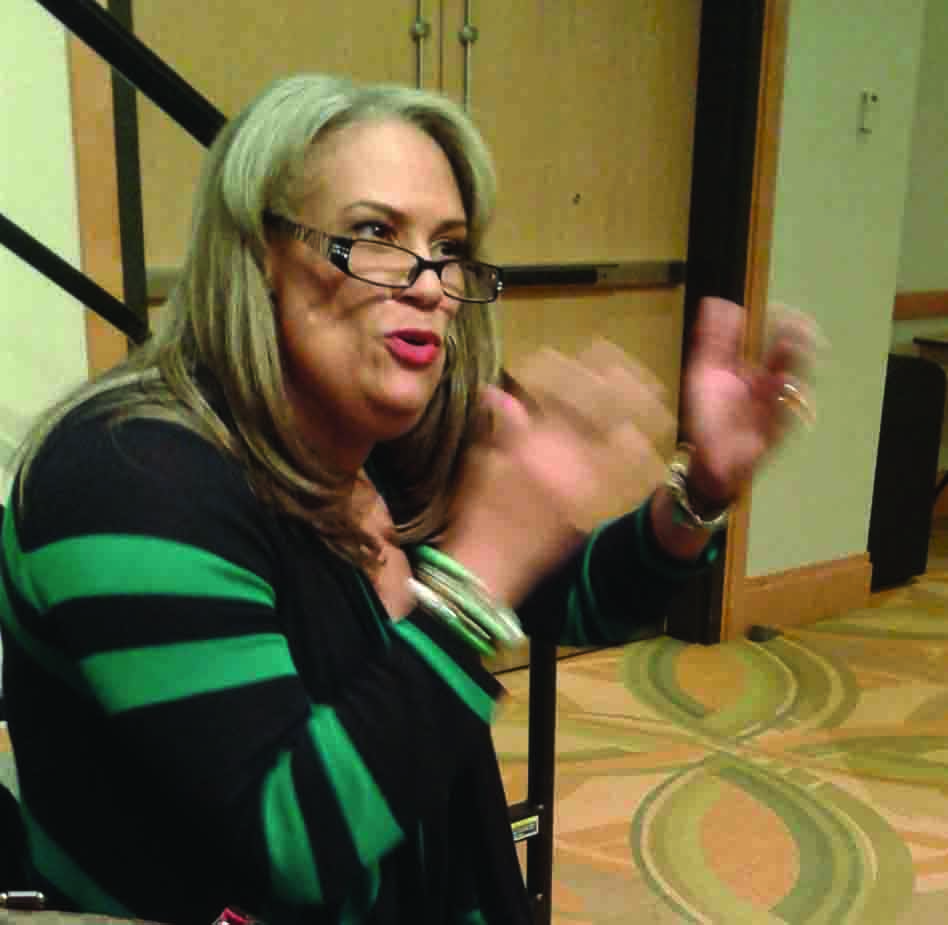 The room was silent as she reached for the microphone and began walking up and down the aisles in the Student Union ballroom, where over 250 Northern Kentucky University students sat waiting to hear what she had to say. She told the technology people she did not need the podium. She wanted to get up close and personal with her audience.

Then there were gasps of surprise and even a few snickers as she began by telling the audience to relax and that she was the only one who couldn’t laugh.
“Let’s loosen this shit up,” she said. “This is about AIDS.”

Rae Lewis Thornton is a minister and Emmy Award-winning AIDS activist who has had AIDS for 29 years. She never had a one-night stand, never had sex on a first date, never had sex with anyone she didn’t love; yet none of those things protected her from AIDS.

On Nov. 12, NKU student athletes from baseball, soccer, golf, volleyball, women’s basketball and cheerleaders joined other students in a bold and blunt discussion with Thornton about promiscuous behavior and the risks of unprotected sex.

“Rethink the groupies,” Thornton told the male athletes.
“Where are your boyfriends?” Thornton asked the women in the audience. “You think you know, you hope you know, pray that you know.”
Chrissy Soards, associate athletic director for Compliance and Student Athlete Services, said that the Athletic Department has a wellness session every year for athletes, but AIDS is usually only a brief part of the program.

“This is the perfect opportunity to have our athletes here because the topic is something that has not been touched on for some time,” Soards said. “I’m interested in hearing her story.”
Thornton has appeared on television talk shows, including “Oprah,” “Nightline With Ted Koppel,” “Dateline” and in magazines like “Jet” and “Ebony and Essence.” She tells her story of how her parents were heroin users, how she had been sexually abused by four different male family members by the time she was 17 and how it took a lot of therapy, love and hard work to get to the point now where she loves herself and is no longer angry at God.

“I have no expectation to be here,” she told the students. “I transitioned from HIV positive to full-blown AIDS.”
Tracy Stokes, assistant director of the African American Student Affairs department and the reason Thornton visited NKU, is glad she is still able to tell her story.
Stokes said she heard Thornton speak while in school at Wright State University.

She told the crowd about having to excuse herself in restaurants because she lost control of her bowels and had to clean herself up in a public bathroom, how she takes 23 pills a day, how she developed drug-resistant herpes because her immune system is compromised and how she will soon have to have a permanent IV port in her arm because the veins in her arm are destroyed after so many treatments.
Thornton said the port is the only way she can continue to receive the herpes treatment that is more effective than the oral medication because it goes straight into her bloodstream.

Thornton explained how being HIV positive leads to having AIDS and how the virus is transmitted. At the end of her explanation she encouraged questions from the audience. Because she used a lot of profanity during her presentation, one student asked how she could consider herself a minister.
“I am going to use every word I can to get my point across,” Thornton responded.

Without changing her expression Thornton turned to offer the crowd another piece of advice about their sexual behavior.
“You must respect the vagina,” Thornton said. “My self esteem was stuck between my legs.”

Hunter Morey, a freshman majoring in finance and accounting and a baseball player, said he thought it was good to have her here talking to college students.
“She was real and to the point,” Morey said. “She did not sugarcoat any of it.”

Deborah Strahorn, coordinator for the African American Student Affairs, said that many of the students she talks with just need to be smart about the decisions they make.
“Nationally it is an issue in our communities,” Strahorn said. “Two-fold with the need to be careful and AIDS being a national issue makes this event an important one that will touch a lot of people.”
According to the Center for Disease Control, in 2010, an estimated 1.2 million people in the United States were living with the HIV infection and 20 percent of those people didn’t know they have it.
Dannie Moore, associate dean of students and director of the African American Student Affairs department, said he is glad that so many students came to hear Thornton’s message.
“This is one of the few times we are talking about something that people don’t want to talk about and bringing it to our students,” Moore said.

Barrett Arnold, a freshman majoring in sports business, said he thought the presentation was on target and he liked the fact that Thornton has a sense of humor.
“She made jokes that pertain to the message,” Arnold said.

Thornton said she tries to give a message of reality, clarity and honesty while using her humor to get people’s attention.
“I do everything I can to find a flicker of light in this darkness,” Thornton said. “When people say that AIDS made me famous, I tell them AIDS didn’t make me, I made AIDS. I was successful before AIDS.”
Thornton was successful. During the 1990s she was the advance coordinator for Senator Carol Mosley Braun’s senatorial campaign, the Illinois State Youth Coordinator for the 1988 Dukakis Presidential Campaign and the National Youth Director for Jesse Jackson, Sr.’s 1984 and 1988 Presidential Campaigns. She retired in 1993 due to having AIDS.
Thornton warned students that the only protection is no sex or protected sex no matter who you love or who loves you.
“Love won’t keep you safe,” Thornton said.