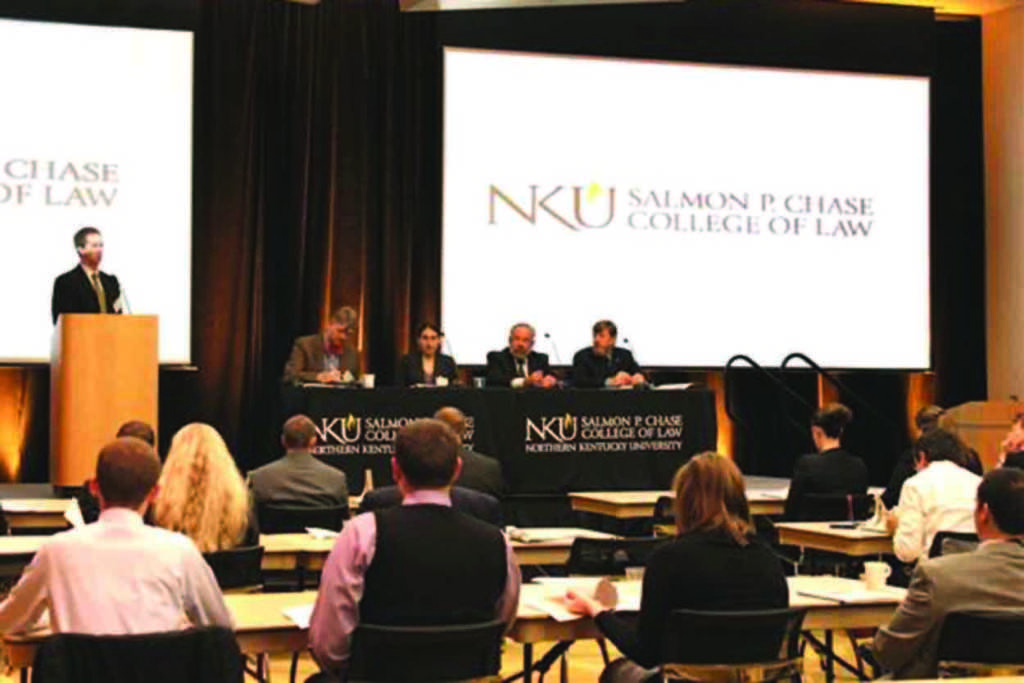 Speakers traveled from as far as Texas for the Salmon P. Chase Law School Fall Symposium at Northern Kentucky University Oct. 20 in the Student Union Ballroom.

The speakers’ combined experience covered a broad spectrum from medical malpractice to teaching law in classrooms.

The crowd of about 100 people was just as diverse in its practice as the panel of speakers, with its members ranging from students at Chase to local practitioners of law. The topic was ethics in the practice and study of law. There were two panels of speakers, who addressed some of the new standards amendments of ethics recently passed by the American Bar Association.

“As a law student at Chase, I felt it was very helpful to see the changes in the rules and ethics and how some of the speakers interpreted them,” Nathan Becht, a student at Chase said.

Jerome Rolfes said the event, while not in line with his litigation work in insurance defense, is important for students not necessarily for networking purposes, but to get out and meet people and be involved in seeing different legal issues.

“It was a lot of fun, very engaged audience. I think we had some great speakers and I thought it was a fantastic event,” John Browning, one of the speakers who has done work in defending various types of physicians, said.

Browning said since the new ABA ethics 20/20 recommendations, which were recently adopted, are so new this event was a good learning experience for practitioners and seminars such as this raise a lot of questions that “may not be answered for awhile.”

“I thought it was very successful and also it was engaging, and I think provocative to some extent. There were dispirit ideas and issues expressed and it made it entertaining, informative, and fun,” said Louise Hill, a professor of law at Widener University School of Law.

“I think they’re seeing an evolution of the rules, of professional conduct…we raised new things that were raised in the past seven weeks,” Hill said.

John Bickers, the event moderator and law professor at Chase, said, “I thought it went very well, there was a lot of very active audience engagement, which is always the hope in a presentation like this.”

Ian Mitchell, editor of the Law Review said, “We had very reputable speakers from all over the country this year that in and of itself is a measure of success, to be able to pool such prestigious professors with so much experience writing and teaching in this area.”

He said it gave everyone a chance to express what they “think the new amendments will be.”

Andress said he thinks that this event helped people realize that legal ethics are not as boring as people think. He said that a lot of coordination went into planning the event, ranging from coordinating travel of speakers to catering the food.