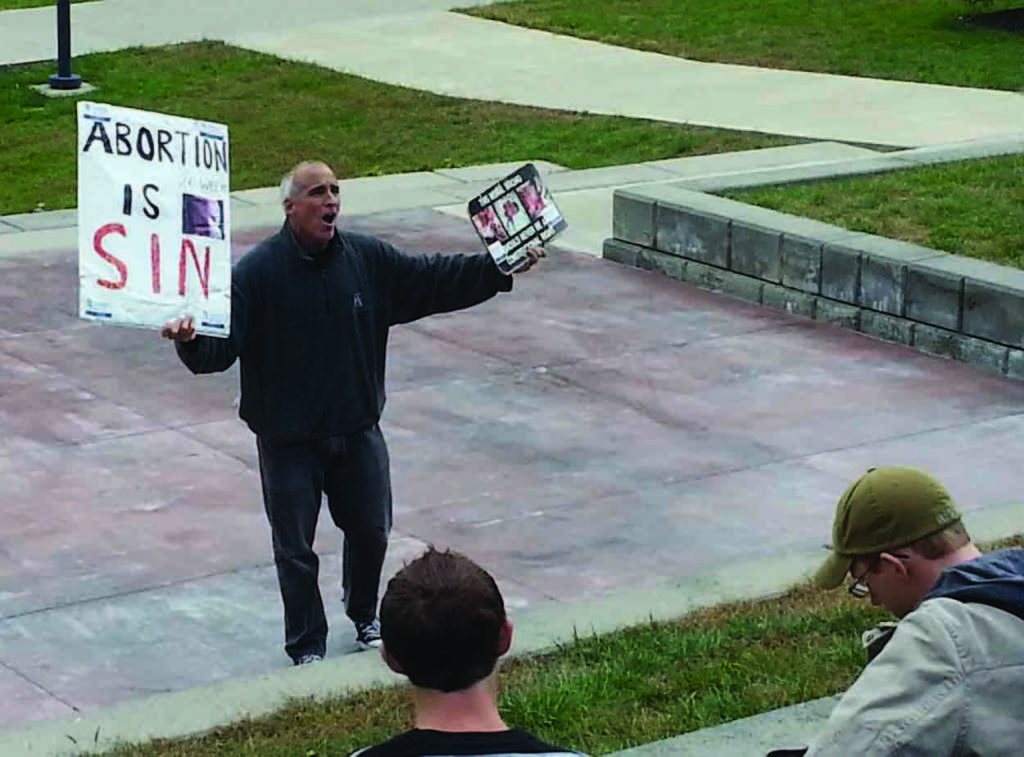 Northern Kentucky University received a visit from an anti-abortion and anti-Barack Obama activist Oct. 8 afternoon. The speaker did not register to speak on campus per the university’s recent policy change, but was allowed to stay as long as he stayed within the policy’s guidelines.

The man, who carried signs that said, “Abortion is sin” and one that presented photos of fetuses and aborted infants, was relocated to the outdoor amphitheater by campus police on NKU’s campus after starting in front of Founders Hall.

In the amphitheater, the speaker debated with students about religion, abortion, the president and Mitt Romney. The majority of students debated against the speaker.

Freshman philosophy major Jake Hensley stressed the need for equal rights for the LGBTQ community. He also quoted Bible verses that refuted the speaker’s platform on abortion and marriage.

Other students, like Carey Parsons, told the speaker that he should be talking about the need for adoption rather than talking out against abortion.

The speaker, who traveled to NKU from California, told students if Obama is re-elected, the world will end. Students often responded with laughs and obscenities, but some did agree.

April Overbeck, a freshman psychology major, said she agreed with some of what the activist said but not his tactics.

“I think he was disturbing people in the area,” Overbeck said.

“The fact that he is from California, on a Kentucky campus trying to impact politics by basing argument on own religion bothers me,” Keach said.

Dean of Students Jeffrey Waple said the speaker was staying within the policy’s guidelines so he was not removed based on First Amendment laws on a public university’s campus. Although, if he wanted to return to campus later this week, the speaker must file a request to do so, according to Waple.