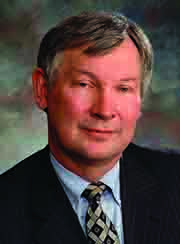 After serving at Salmon P. Chase College of Law for six years, Dean Dennis Honabach announced that he will retire from his position as dean of the college at the end of this school year.
Honabach announced his retirement at the end of the Chase College of Law faculty meeting Sept. 20, where he also announced that he would be returning to the university as a law professor for the following school year.

Honabach explained at the meeting his reasons for leaving which included a mixture of a desire to teach and a desire to spend more time with his wife, who is currently living in California.
According to Northern Kentucky University part-time professor and Chase College of Law alumnus Chris Cole, Honabach has served his time at Chase College of Law well. “Under his [Honabach’s] leadership, the law school has taken steps to ensure that graduates are ready to practice law the day they cross the stage,” Cole said.

Honabach is responsible for the creation of new Chase academic centers which give students numerous real-world legal experiences. These academic centers are one example of Honabach’s steps to ensure graduate’s readiness in the real world.

According to Honabach’s statements at the faculty meeting, the search for a new dean for the college of law will soon commence.

While there appears to be an overall sense of contentment with Honabach’s six year position as dean, many are looking forward to an even brighter future.
“As a Chase alumnus,” Cole said. “I’m excited about the future of the school and I look forward to the next era of the Salmon P. Chase College of Law.”