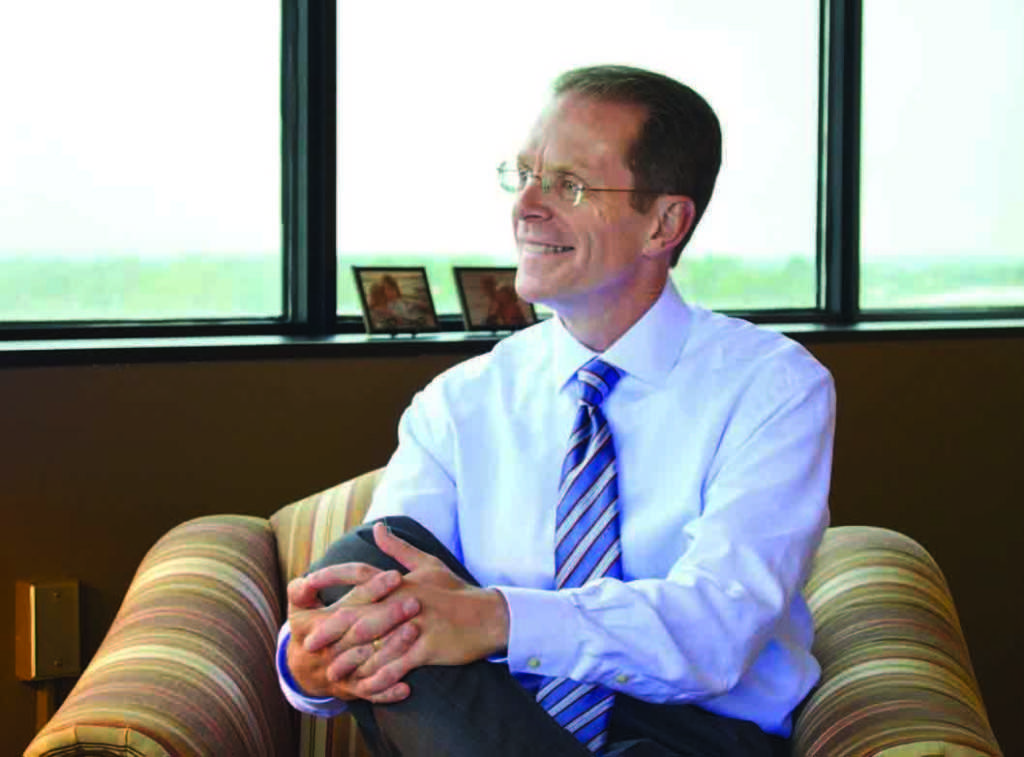 As we finish up our fifth week of school as students here at Northern Kentucky University, the new president is just about seven weeks into his “energizing” position. Geoff Mearns has spent that time learning, trying to meet the students and in a lot of meetings.

The most challenging part of the presidency for him so far is time management, Mearns admits. “But everyone’s been patient, so it’s not a complaint … I keep telling folks to keep scheduling me up until I cry uncle,” he said. But meeting students across campus, specifically at Fresh Fusion, makes up for a busy schedule.
“The students were out there and [Fresh Fusion] was really a great opportunity for me to just walk around and meet lots of students, so that was probably the most fun so far.”

In meetings with various constituent groups on and off campus, Mearns is planning a strategy to learn. He’s currently focused on learning as much as he can about NKU and the community before making any major decisions.

“I don’t think it’s appropriate or effective for me to come in with just my own experiences and my own ideas and try to impose them,” he said. “An institution as strong and diverse as this one, it’s important to have a foundation about what this university and people are all about … it will lead to a more formal planning process.”
After the education process is complete (around the beginning of the new year, according to Mearns), the president has created a list of priorities to accomplish for NKU.
At the top of the list is student success. Student success is hard to define, Mearns said, but it involves many aspects that the new Student Success Center will work to include.

“Some people measure it in a way that I think is simplistic, which is just what are the retention and graduation rates of first-time, full-time freshmen cohort, we know our student population is much more diverse than that,” he said. “That metric, while its important and we’re going to continue to see how we’re doing against that, that metric is not enough.”

The parts of student success are increasing the number of degrees conferred, meaningful employment and personal development, which is hard to measure, but still achievable.
“I believe we also need to prepare students to be good citizens, informed citizens, in what is an increasingly diverse and integrated world … that is our responsibility as well,” he said.

The Student Success Center, under construction now in the University Center, will combine both advising and career development to centralize these goals. Each member in the center will be cross trained in advising and development to properly assist students, according to Mearns.

Recruitment is also part of overall student success. With a new partnership with Royall & Co. finalized in the spring by former president James Votruba, recruiting students in the tri-state area is about increasing both the “quality and quantity” of students entering NKU.

The recruitment firm is not a matter of outsourcing work, according to Mearns, but more about broadening NKU’s scope throughout local high schools and universities. The firm, which worked with NKU this summer on recruiting, helped bring in the 2016 freshmen class, one of the university’s most academically successful classes.

While Mearns’ has his priorities in line, he said the presidential seat comes with challenges to deal with. In his opinion, the two biggest challenges facing the university are financial constraints and dealing with the ever-changing technology and learning techniques.

The financial constraints, while not unique to NKU, are one of the president’s responsibilities to improve, according to Mearns.

“I see that, in part, to be an advocate for the university and our students in Frankfort so that we can make our case for additional support. I also see my job as being a real advocate with the external community … to ask them to provide us with their resources to support our students and our programs,” he said.

To enhance the student learning experience, Mearns wants to find a way to use technology in the classroom in the “right way.” Finding a way to preserve the close student-professor relationship NKU strives for is going to be the hard part.

“How do we use it in the right way to make our world and the educational experience better and not detract from what we’re trying to achieve? … I don’t have the specific answers, I believe they do lie in the people on this campus,” he said.

The students are one of the presidential perks, according to Mearns. And he enjoys meeting them.

“Never hesitate if I’m walking some place to come up and say hello, come up and introduce themselves, invite me to a student event, take a picture, it is one of, if not the most enjoyable part of the job,” he said.

It’s not always about the priorities and challenges for Mearns either. In some of his rare free time, he does wear normal clothes and listen to his favorite music — James Taylor, by the way — with the family, even if there isn’t much anonymity with the job.