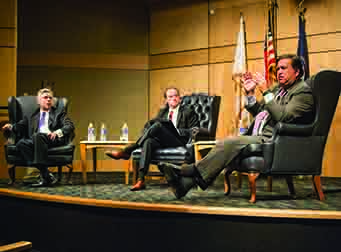 On Tuesday evening, the annual Alumni Lecture Series returned with two distinguished former governors, Jon Huntsman, Jr. and Bill Richardson. This year’s theme “Governing in America: The Battle for the Presidency” drew from insight and experience that both speakers had while campaigning for the presidency themselves.

Bill Richardson, former governor of New Mexico and Energy Secretary, campaigned in 2008 against President Obama; and, Jon Huntsman, Jr., former governor of Utah and ambassador to China, ended his presidential run this past January after the New Hampshire primary.

Tuesday night’s lecture marked the 12th year of the Alumni Lecture Series, an event that has traditionally brought big name political and media figures to Northern Kentucky University in a fair and balanced way.

The student session earlier in the day featured a more informal ambiance but still contained some insightful questions from students. Topics were generated from a student-filled Otto M. Budig Theater that ranged anywhere from political conventions to third-party politics. This year’s event had some fun and lighthearted moments as well as some in-depth analysis and discussion into the current political atmosphere and the role the next president will have to play.

Director of Marketing and Communications Chris Cole said that this is a type of event you don’t necessarily get every day in Northern Kentucky. “It gives people in Northern Kentucky a chance to see and hear firsthand these types of political figures,” Cole said. “It’s a different experience when you get to hear these political perspectives in the same room.”

The student lecture, Cole mentioned, usually has a more laid-back approach from the speakers and this year’s was no different. Both Huntsman and Richardson have been longtime political friends and traded compliments to each other throughout the hour-long session.

However, Cole does remember moments during past events where tensions rose between speakers and this year the speakers did differ on some topics, specifically the role of political conventions as well as the importance of political parties.

Huntsman, a moderate Republican, skipped this year’s Republican convention for the first time and said both side’s conventions accomplish very little nowadays, pandering only to the same unaffiliated demographic. Richardson, on the other hand, said the conventions are an important time for a party to motivate and entice voters.

Senior political science major Devon Skeens struck another discord with the speakers when he asked about the current state of the Republican Party. Huntsman deflected the question by discrediting labels that are thrown around in politics but Richardson branded the current Republican Party a fringe group.

“The discussion is always great to hear because the people are always different,” Skeens said. This was Skeens’ fourth time attending the Alumni Lecture Series.