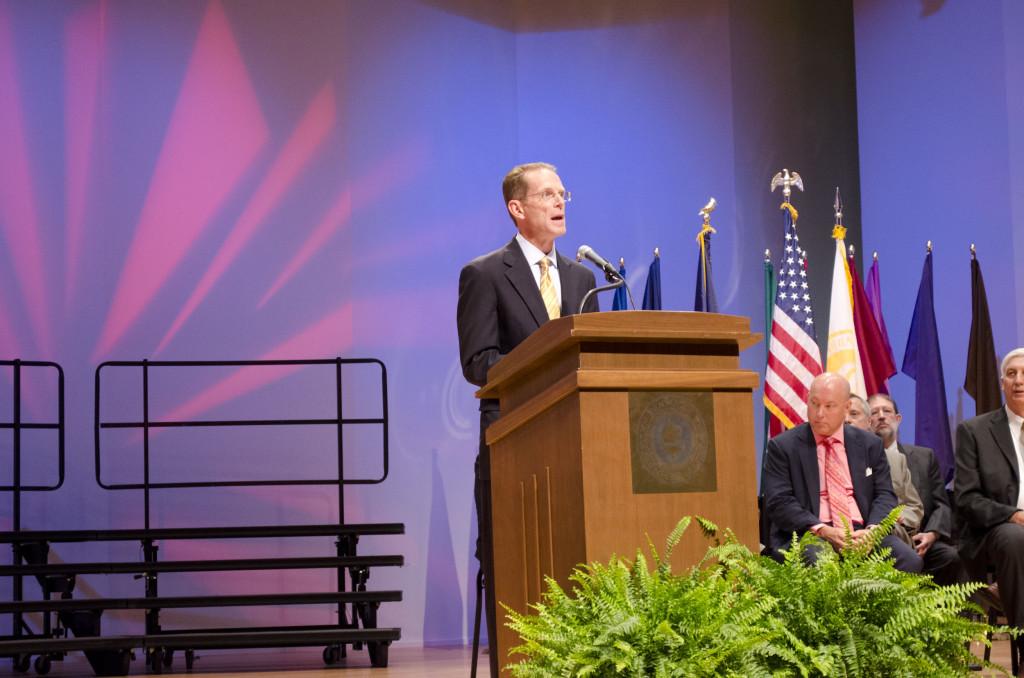 After being absent due to his mother’s death, Northern Kentucky University’s new president Geoffrey Mearns returned Aug. 17 to discuss the 2012-2013 academic year. Mearns’ state of the university address introduced his plan to use a survey to collect advice on how to strengthen the university’s “distinctive factors” and ultimately improve recruiting strategies.

Mearns talked to a full house of faculty, staff and students in Greaves Concert Hall about the increased competition NKU is facing from the University of Cincinnati, Xavier University and for-profit online institutions.

“Instead of wringing our hands, we will develop more effective enrollment recruitment strategies throughout our region and beyond,” he said. “We won’t waste time complaining, we will focus on competing.”

To do this, Mearns’ asked a question, “What are the distinctive attributes of our traditional, place-based university?” He said he is not yet ready to answer the question, which led him to introduce the survey, but said he plans to find the answer and “enhance those attributes” and communicate them to the community.
Within the next two or three months, according to Mearns, he will personally circulate a survey via email and in writing to all members of the university community, both internal and external. A small set of open-ended questions will be included and returned directly to Mearns.

In addition to the survey, Mearns plans to meet with alumni, donors, elected officials, business leaders and community members to gain more advice on how to further strengthen NKU’s best attributes.

Mearns said that after the survey and initial meetings are completed, he “will then be prepared to propose a process by which we can develop a focused, effective strategic plan.”

The survey is also a way for the surrounding community, and NKU, to interact with Mearns as the new president, according to Provost Gail Wells.
“This is a wonderful opportunity for the university community to communicate directly with our new president and also an effective way for the new president to hear from a broad range of people who represent many different points of view,” she said.

Currently, Mearns is continuing the use of the strategic plan set up by former president James Votruba. He will also continue implementing individual department and college plans until the survey and new plans are completed.

Although the plans will not be concrete until after the survey is completed, Mearns said “we must foster an institutional culture that is innovative, creative, responsive and nimble” and student success in the new strategic plan.