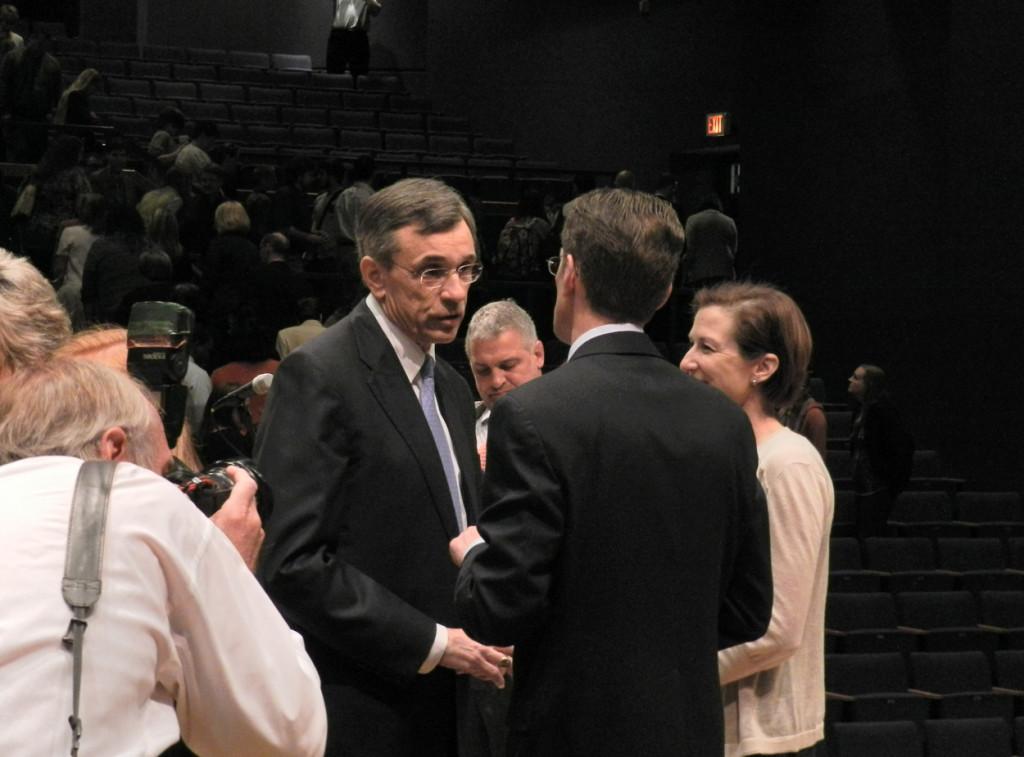 Votruba will finish out the summer at NKU and work with Mearns through the transition to make it as seamless as possible. Although he will still be responsible for his regular duties, Votruba will begin deferring some decisions to Mearns as the months progress, likely in late June or July, he said.

“I’m making lists of things we need to go over, because I’m trying to structure this transition in a way that will deal with a political dimension, on-campus budgetary issues, lots of different things,” Votruba said.

Meetings with faculty, staff and the presidential team in order to “be an active listener” are at the top of Mearns’ list after he finishes the academic year as provost at Cleveland State University. Before jumping into the challenges facing NKU, Mearns said he wants to know where the university has been successful in the past 15-20 years and where it can improve.
Mearns’ mentorship with Votruba — and following in his footsteps — is “daunting,” but after recent conversations with the current president, he said he knows he is capable of sharing his advice for leading the university in the right direction.

The advice sharing between the two men, according to Mearns, will be a “one-way street” because of the amount of knowledge and experience Votruba already has to give.
The president elect is coming to NKU from Cleveland State University in Ohio, where he currently serves as provost and senior vice president for academic affairs. The transition, he said, will be similar to his move from dean of the Cleveland State’s law school to the provost position.

The difference, and one of the challenges Mearns said he will face, will be finding a balance between internal and external responsibilities. As provost, Mearns deals more closely with internal duties of the university, but a president must be equally in touch with the outside community to be successful, he said.
Similar to a presidential position, as dean of the law school, Mearns worked specifically with the external community to raise funds for a “high tech trial courtroom” that is available to both law students and community members.

Both Votruba and Mearns agree on the challenges awaiting Mearns in the upcoming years at NKU. Those include financial woes and maintaining a quality undergraduate education with the addition of new learning techniques and technology.
It is a reality that the university is continuously underfunded by the state. To fight this, Mearns said he plans to “be a present and vigorous” advocate for NKU at the state capitol and with Kentucky legislators.

NKU’s underfunding was a project that Votruba would have liked to make more progress in improving during his time at the university, he said.
“What [Mearns is] going to have to confront financially is the future and how we can continue to invest in the university and its academic programs and support services for students even when the state isn’t able to participate in the funding,” Votruba said.
With an increase in technology and new ways in learning, Votruba and Mearns agree that it is important for the new president to find a balance between faculty development and new styles of interactive learning.
“How can we retain something that we’re proud of when technology is threatening it?” Mearns said, referring to NKU’s undergraduate education quality.
A challenge specific to Mearns’ agenda is continuing Votruba’s work to stay present in the community. The work Votruba has done in the community is one of his proudest accomplishments during his position at NKU, he said.

“We have achieved national reputation in the area of public engagement and I am very proud of the work we have done to strengthen and support P-12 education, healthcare, economic growth as well as the university’s public intellectual role,” Votruba said.

After 15 years at the university, Votruba believes he is leaving NKU in a “strong position for the future,” as it has grown stronger and more mature under his leadership. Mearns and Votruba, according to the current president, have similar values, but the change will bring a “burst of energy” to NKU.
“He will come to all those issues with a lot of background and a lot of insight … he may approach these in some new and different ways and that’s the strength,” Votruba said.
Although he’s preparing to leave the university in August, Votruba will be returning after a year off to teach in NKU’s doctoral program, focusing on leadership. His year off is not exactly one for relaxation, although he does plan to spend time with his wife, Rachel, and their children and grandchildren.

Votruba will also be working on a national task force focused on improving college readiness in high schools across the country. He said he also wants to start planning courses to teach when he returns to campus, and incorporating new technology into the lesson plans.