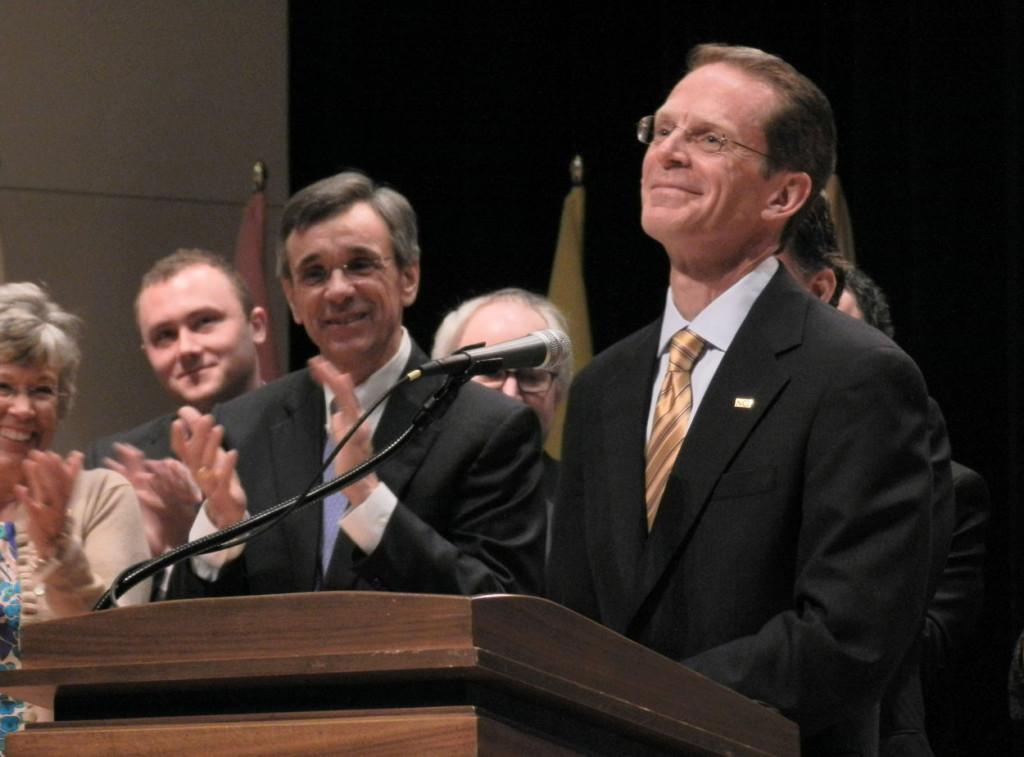 Mearns was announced president on April 17, 2012. He was ushered in nearly five years ago.

After a year-long search, sifting through hundreds of applications and hosting three campus visits, the Northern Kentucky University Board of Regents announced the university’s next president on the morning of April 17.

“It’s an honor, as I said, not only for me, but for my family,” Mearns said. “This was a decision we approached as a family, and it was so important to me to come to an institution that is not only strong, but it’s part of a dynamic community that has a great relationship with this metropolitan community.”

Out of the three finalists, two withdrew from the race, leaving Mearns with the position.
Board of Regents chair Terry Mann said the two other finalists were given the opportunity to “reaffirm” their commitment to their own universities, where both were already sitting presidents.

Mearns is stepping out of his position as provost and senior vice president for academic affairs to make the move to NKU. In an April 9 on-campus forum with students, he informed the students he would focus heavily on retention rates, the Division I transition and how he could better integrate residential and commuter student relationships if chosen as the next president.
He also plans on focusing on student relationships and being “physically present” on campus at events and in informal settings. Mearns said that informal settings with students are some of the most important interactions the president can have.

One of the biggest challenges Mearns will face, he said, is persuading Kentucky state legislators that their investments in the university are “worthwhile and important” to the future of students and the government.

Mearns also said he wants to continue Votruba’s work on expanding and growing the university in the community.
“Higher education is under extraordinary pressures these days, both financial as well competitive pressures, and, in my estimation, Northern Kentucky is well-prepared and well-positioned to meet those challenges,” he said.

The next president will spend the summer making the transition from Cleveland to Northern Kentucky, stepping into office August 1. Mearns, who has five children with his wife, Jennifer, is moving the family to the area.
Professionally, Votruba will act as Mearns’ mentor to help prepare for the transition and position. “While it is a bit daunting to recognize that I have to succeed [Votruba], there is nobody who could be more fortunate than I am to have him as a mentor,” he said.
The search for a new president began in September 2011 with a Presidential Search and Screening Committee. The committee hired a search firm, Isaacson, Miller, to recruit potential candidates that would be a good fit for the university.

NKU paid the firm $105,000, and search committee chair Marty Butler said he had no second thoughts on the firm’s choices. The process, which included open forums with students, faculty, staff and the community, gathered good feedback and open participation, according to Butler.

In comparison to the remaining candidates, Mearns has the least amount of higher education administrative experience; previously he was a practicing lawyer and was appointed Dean of the Cleveland-Marshall College of Law at Cleveland State in 2005. In 2010, he made the transition into the provost position.

Mearns will act as the university’s fifth president, replacing Votruba, who began at NKU in 1997. Votruba publicly announced his retirement in August 2011.

In his 15 years here, Votruba’s tenure has seen a 34 percent increase in student enrollment, from 11,785 in 1997 to nearly 16,000 today. The university also added multiple degree programs and facilities on campus, including the Natural Science Center, a Student Union, The Bank of Kentucky Center and Griffin Hall.

Although not immediately, Votruba will return to NKU to teach educational leadership in the university’s doctorate program and remain active in the community.