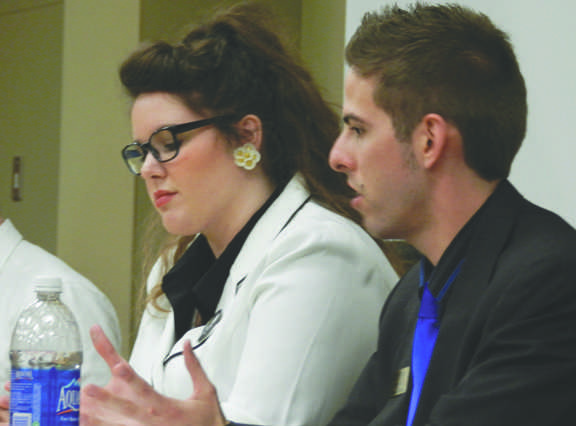 Another year and another round of SGA presidential elections have come our way. While last year’s race was between two people, this year’s has three possible candidates. Erik Pederson is the current SGA vice president, Chuck Rust is a senator in SGA and John Young is the third candidate and has no previous experience in student government.

On March 26, the candidates and their running mates met for the only debate they have had thus far. The debate was hosted by The Northerner and let all three candidates express their running platforms and views on certain issues concerning NKU and its students.

Pederson’s vice president choice is current secretary of administration Allen Hornung. Rust’s is Chanell Karr. Young does not have a running mate.
The issues covered in the debate ranged from NKU budget cuts, SGA being a bigger part in the whole student body, and previous and related experience.

Since Young is a regular student with no ties to SGA or the higher administration, his views on certain topics were as different as his campaign flyers scattered around campus. When asked what his motivation to run for president Young explained that he wanted to involve the students that don’t know about the elections.
“I thought I’d just run, shake things up and see what will happen,” Young said.

Young’s platform for his campaign is “This is a performance thing,” and his goals are to bring recess to the college level and protect the school from zombies.
Despite drawing a few laughs from those in attendance, Young was ready with answers. One of his final statements concerned previous experience.

“I’m definitely pro lack of experience. I think that being involved in a system continues to perpetuate the system,” Young said. “If you want to see changes, if you want to see something done different, you cannot rely on the people who are part of that system to make changes. You have to have other people come in and make changes.”

Pederson and Hornung’s platform is a three-pronged plan that will focus on students, campus improvements and advocacy for NKU. Their plan was mentioned quite a few times but was not explained in any great detail. Pederson and Hornung focused on expressing how long each had been in SGA. Between the two of them, they have been involved with student government for four years.
“Chuck and Chanell’s SGA experience, together, is less than [either] Erik or me,” Hornung said. “Our double amount of experience sets us apart.”

While Pederson and Hornung repeated how much time they have spent in SGA, Rust stated that SGA isn’t the “be all end all” way to earning the experience needed to be president.
Rust and Karr’s platform is focused on the campus, students and the community. The pair wants to create a more-involved NKU community and devote time to recognizing the university’s commuter students. Rust and Karr also plan to look at NKU’s pedestrian safety as students are the campaign’s top priority.

A good portion of the hour-long debate was devoted to talk about which candidate had the better experience. In some way or another, when other topics were discussed, the debate came back to what the candidates had done in the past.

The candidates’ closing statements spoke directly to the audience and potential voters. Rust assured that he and Karr are there for the students, not themselves.
Pederson took a step further by saying, “I’m an NKU student. Allen’s an NKU student. You’re an NKU student. We’re experienced in SGA, and we’re passionate about NKU and the students that we represent. Our first priority is going to be listening to you all.”

To maintain his laid back approach, Young concluded with, “If you want to have one of the most interesting and entertaining student government years, then vote for me. I will not take it lightly.”
Elections will take place March 28 and 29 and through various outlets. Students can vote online from any computer with their ISO number, which can be found on all All-Cards, starting at 7:30 a.m. March 28. There will also be laptop computers set up at the Student Union information desk, Norse Commons and Callahan Hall. The polls will close at 10 p.m. March 29.