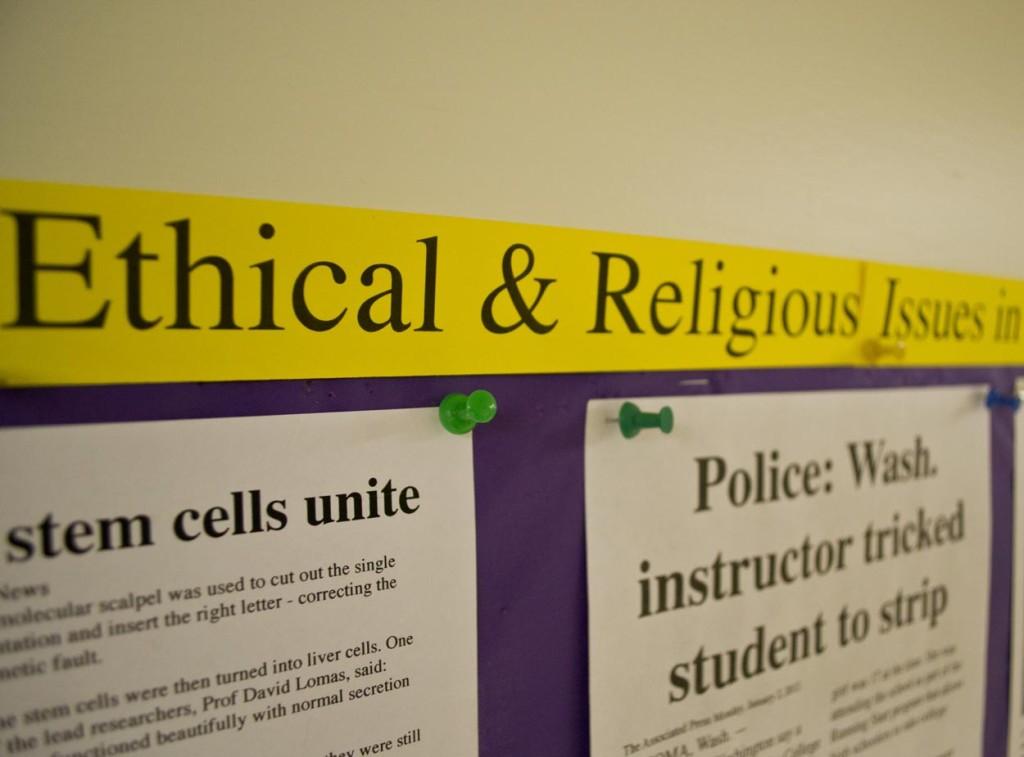 A German man convicted of cannibalism found his way to a bulletin board in Landrum Hall at Northern Kentucky University. Although it has been several years, his name and story will remain a memorable news article for years to come.

Over the years, the bulletin board displaying the title “Ethical and Religious Issues in the News” has displayed a variety of news articles related to philosophy. The articles grab passers’ attention with shocking, controversial or even bizarre headlines or photos. The articles range from the case of the German cannibal to a woman suing for a tattoo of a pile of poop on her back.
Philosophy professor Terry Pence adds the news articles to the bulletin board, which is located on the second floor of Landrum. Pence has been teaching at NKU since 1980 and has maintained the bulletin board for the majority of his time here.

“The idea behind it would be to illustrate the relevance of the discipline,” Pence said. He tries to add articles relating to college life or even anthropology — which shares the floor with the philosophy department. A recent article, “Viagra fellas stiffed by NHS” relating to philosophy garnered not only a chuckle from Pence but also some ethical interest.
The article explains that in an attempt to save money, the National Health Service has restricted the amount of Viagra men are allowed. Pinned next to the NHS Viagra restriction was the article “Scandal of NHS tattoo removal.”

“[NHS] is running out of money, but they were nevertheless paying for people to have their tattoos removed,” Pence said. “That’s what people inflict on themselves.” Not only is there some humor in “fellas” getting “stiffed.” There was interest piqued in this ethical issue between a need of some men and the want to remove a mistake.
Another article that garners some giggles is “Tatt-poo for cheating: Artist inks excrement on wayward lover’s back.” A Dayton, Ohio woman wanted her boyfriend to tattoo a scene from The Chronicles of Narnia trilogy on her back. She had previously cheated on him, and in an attempt to get revenge he tattooed a pile of poop on her back.
“Tatt-poo” grabbed senior photography major Katelyn Cameron’s attention. “The picture is what intentionally interested me,” she said. “I’m not usually on that floor, but it was nice to read through something other than the usual advertisements on other bulletin boards.”

Not all the articles are humorous. “There is some serious stuff that I think is important, too,” Pence said. Not only was the German cannibal story memorable; it was also on a serious topic.
A German man, Armin Meiwes, advertised on the Internet that he was “seeking a young man for ‘slaughter and consumption’,” according to the article “Cannibal: I had other Volunteers.” Meiwes claimed that the victim came to his home and agreed to being killed.

Meiwes believed that he had not committed a crime, because his victim agreed to being killed and eaten. “How can you charge this guy with murder if the person consents to it?” said Pence.
By posting these articles, Pence hopes to gain students’ interest enough to take a course. For Frank Redden, a NKU philosophy graduate, the interest has only gotten stronger.
In reaction to an article as disturbing as the German cannibal, Redden mentioned her technique to get over the disturbing nature of articles such as these. “I would like to think I have the capacity to feel genuine empathy in regard to these spins overall while also maintaining my sanity by seeing it as fiction rather than true,” Redden said. “For me truth is stranger than fiction in terms of the human condition.”