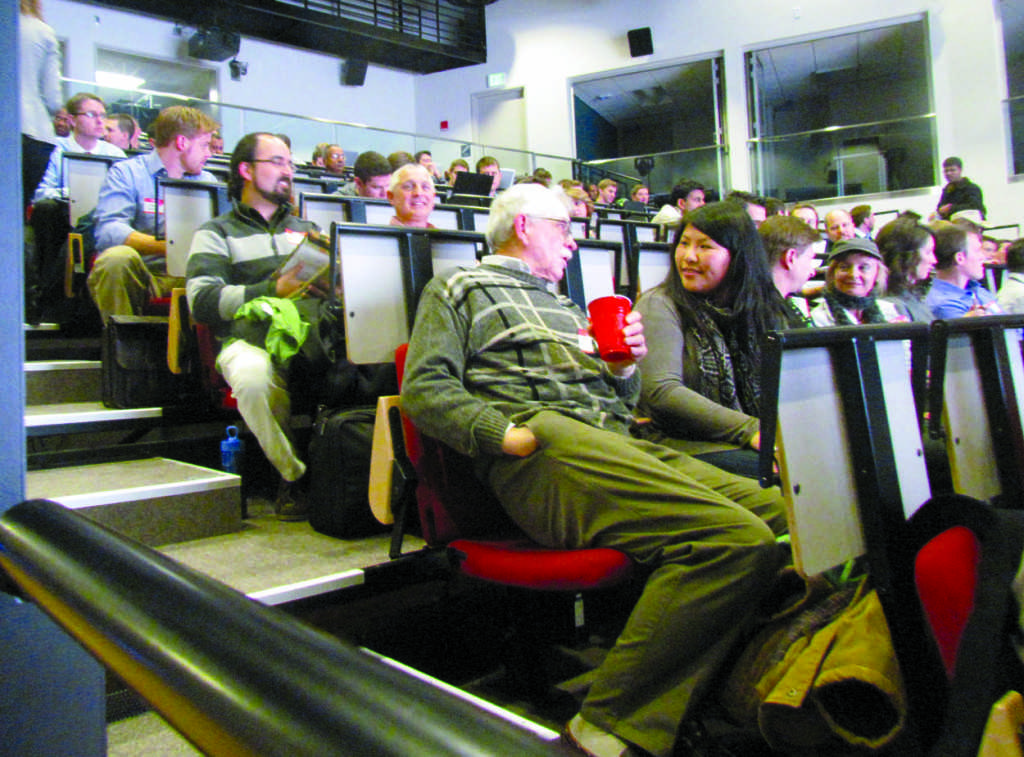 ver the weekend, more than one hundred entrepreneurs gathered in Griffin Hall’s Digitorium to design their own companies and pit them against each other in an event known as Startup Weekend, which stopped by Northern Kentucky University on its journey around the world.

“Startup Weekend is an intense 54-hour event, which focuses on building a web or mobile application” that could be the foundation of a “credible business,” according to the event’s website.
The participating software developers, graphic designers, students and business people pitched their ideas, recruited other teammates and then executed their working models. Each presentation was judged on business model, customer support and execution.

Joseph Fons, a senior communication major at NKU, was part of the winning team, which was called “Dramaville.”
The Dramaville application, very similar to Farmville and Cityville, was derived from a point system and celebrity gossip. “It is the intercepting point of social media and celebrity gossip…similar to fantasy football,” Fons said.

The group came up with the idea of Dramaville after its first model fell through. Based off of marketing research and the world of fantasy gaming, Dramaville was created. “You want the Snookies and Lindsay Lohans of the drama world,” Fons said.

This means that the more drama a chosen celebrity creates, the more points a player would receive. The application would update on the player’s Facebook page, in turn advertising the application.
Winning team member and undeclared sophomore Chaz Edwards said he thinks the application will gain popularity. “In American society, what we’re into, celebrities are a huge thing, and a lot of America would probably be into it,” he said. “They’d eat it up.”

Although he was also on the winning team, Fons found the experience in itself the most rewarding. “Bringing people with these different talents and pulling this off in such short notice was really rewarding,” Fons said.

The team was rewarded with an assortment of services, including a three-month social media plan from Web Media Expert, free consultation time with Mindbox Studios, free business formation services with Taft attorneys, the opportunity to work with the Brandery for six months and an opportunity to pitch their business at the Continuous Web meeting Feb. 15.

Jamie Hazenfield Jr., a senior entrepreneurship major at NKU, also participated in Startup Weekend. Hazenfield’s team focused on software known as Buyappt that would allow salons to fill cancelled appointments. According to their marketing research, Hazenfield said, “The average salon loses $70,000 a year in revenue.”

For Hazenfield, the experience was “worth every minute.” The process was labor-intensive, as Hazenfield put in more than 12 hours of work on Saturday, but it allowed him to see the technical side of entrepreneurship. “It was great seeing like-minded people coming up with a common idea and going with it … seeing how far it will go,” Hazenfield said.

Startup Weekend, founded by Andrew Hyde in 2007, is a 54-hour event set out to educate entrepreneurs and build communities around the world. According to the website, “By the end of 2010, Startup Weekend had built a network of over 25,000 alumni, 150 volunteer organizers and 60 trained facilitators spread across more than 100 cities in 30 countries.”
The next Startup Weekend will take place in Cairo, Egypt Jan. 19-21.