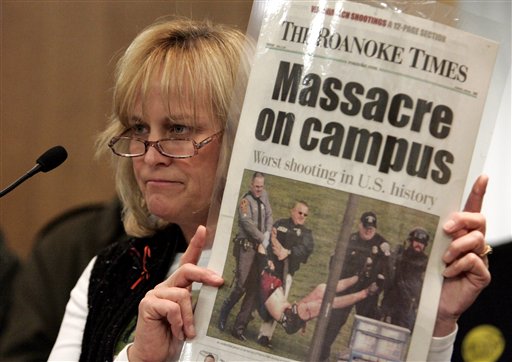 WASHINGTON (AP) ‚Äî After two Virginia Tech students were shot in their dormitory on April 16, 2007, there were no immediate signs of an additional safety threat on campus, the school’s police chief said Thursday.

But more shootings did follow that morning, leaving a total of 33 people dead. The Education Department has fined the university $55,000 in connection with its response to the rampage, a penalty that Virginia Tech is contesting before an administrative law judge.

The department says the school violated the law by waiting more than two hours after the dorm shootings before sending an email warning. By then, student gunman Seung-Hui Cho was chaining the doors to a classroom building where he killed 30 more people and then himself.

The department says the email was too vague because it mentioned only a “shooting incident,” not the deaths.

The police chief, Wendell Flinchum, testified on the second day of the hearing that the evidence indicated the dorm violence was a domestic shooting and the assailant probably had fled.

Flinchum said that conclusion was based on the isolated nature of the dorm room, the lack of forced entry and what the victims were wearing ‚Äî the woman in pajamas, the man in boxer shorts.

The scene, he said, did not suggest an ongoing safety threat.

“I don’t believe we could have known that from what the scene presented,” Flinchum said.

He said the dead woman’s boyfriend initially was identified as a “person of interest.” Police were shown a social networking site with the boyfriend holding guns, Flinchum said, and were told he usually dropped her off on Mondays. The shootings took place on a Monday.

The university contends it followed standard protocols in place on campuses at the time and that the department is holding it to a higher standard than was in place then.

The university faces charges of failure to issue a timely warning and failure to follow its own procedures for providing notification.

Parents of some victims have testified that they think their loved ones would have stayed away from campus if they had known of a threat, and the Education Department said the school had an obligation to protect the community.

James Moore, a department official, testified that even if it had been a domestic incident, there were enough signs that a gunman was on the loose to warrant quicker campus alerts by the school.

Judge Ernest C. Canellos ended Thursday’s hearing by asking each side to submit a brief by the end of January. It is unclear when he will issue a ruling.

The fines were levied under a 1990 law known as the Clery Act, which requires colleges and universities to provide warnings in a timely manner and to report the number of crimes on campus.

The law was named after Lehigh University student Jeanne Clery, who was raped and murdered in her dorm room by another student in 1986.

The maximum fine per violation under the law is $27,500. Institutions also can lose their ability to offer federal student loans, but that has never happened.

An appeals hearing in Clery Act cases is rare. Experts say institutions typically agree to fines and take corrective action or reach an agreement with the Education Department.