Preparation for finals in full swing across campus 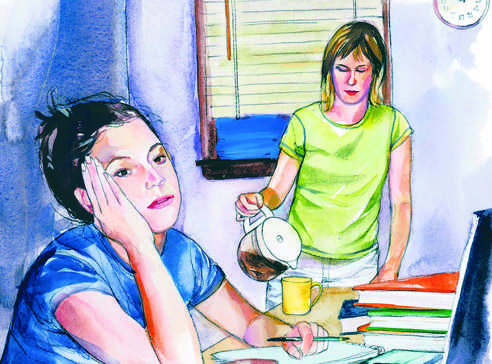 The semester is winding down and coming to an end. This means winter break, snow, time spent with family and a big holiday celebration.
Don’t get your hopes up yet, students. There is still one big obstacle standing in the way of freedom. It is called finals week, otherwise known as hell on earth.

It’s one of the most stressful weeks students go through in college, especially for those who are looking forward to upcoming graduation. In addition to dealing with jobs, family and friends, finals week only adds to the stress of college life.

Some students have developed their own ways to combat the hectic week. Brian Leibreich, a senior at NKU, said he goes out to the country to relax the weekend before finals begin.

“I go to my family’s farm just outside of Maysville, Ky.,” Leibreich said. “There is no TV, cell phone service, Internet or any other distractions. During that time, I just study and enjoy the weather to relax and prepare for the week to come.”

But once finals week hits, Leibreich said he struggles with getting enough sleep.

“When I had three exams in three days, I ended up getting a max of five hours’ sleep between the three nights before the exams,” he said. According to Leibreich, it was always fun on that final night after the last test to go home and just sleep.

Ally Weimer, a junior at NKU, uses a rather uncommon method for stress relief.

“I, personally, clean when stressed. So during finals week, I already know I’ll be cleaning a lot, along with studying,” Weimer said.
Additionally, Weimer said that after a long night of studying, she does what some college students do on the weekend to help release stress or to celebrate their accomplishments of that week.

“I also drink some at the end of the night after studying to reward myself,” Weimer said.

In addition to finding their own routine to knock down stress levels, students can also do well on finals by eating healthily during finals week. On Thursday, Dec. 8 from 8 p.m. to 11 p.m., the Feast for Finals, a program run by NKU Wellness Center’s Student Advisory Committee, will offer the opportunity for stressed-out students to come and study with friends and eat healthy foods.

The committee will be at the event, which takes place in Norse Commons, inviting students to join 10-minute Chillax Yoga stretches.
Also, information about the many stress-reducing food options available for students under pressure will be posted around campus during finals week.
In order to open up more time for study, Steely Library’s hours have been extended.