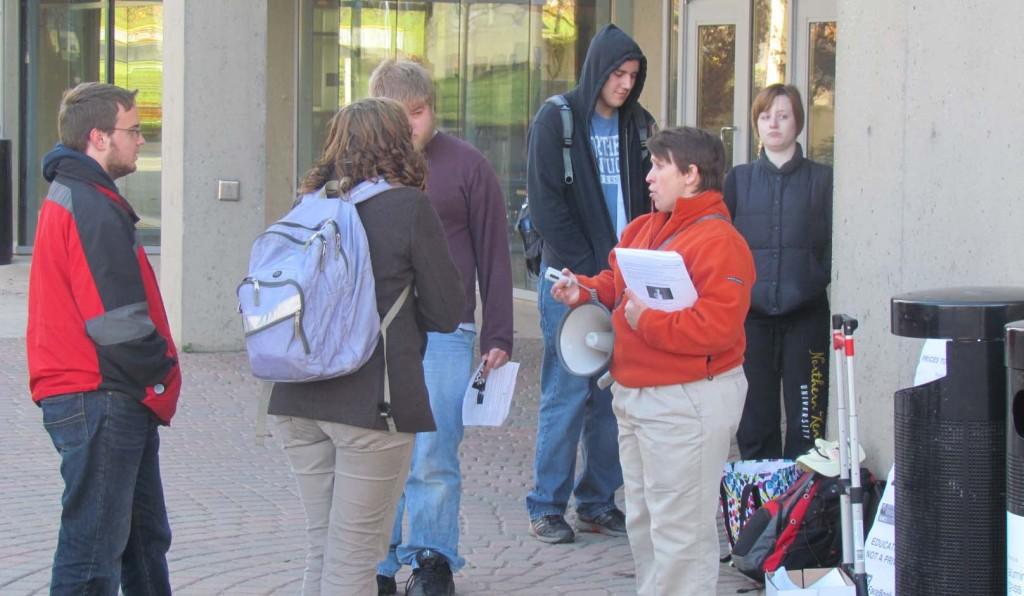 Editor’s note: This story originally said Jona Kessans served with the U.S. Army Rangers and that she is a Salmon P. Chase College of Law student. That is incorrect. She served in the Army, and previously attended Chase. She is not currently enrolled in the law school. The story has been updated to reflect the corrected information.

The recent Occupy Wall Street protests around the country have found their way to Northern Kentucky University. On Nov. 17, student Jona Kessans handed out flyers in front of the Student Union to draw awareness to the Occupy NKU movement, which began in New York City Sept. 17.

From there the movement spread like wildfire throughout the states and some European and South American countries.

Kessans, 43, is an Erlanger native who served in the U.S. Army from 1988 to 1996. She said she hopes that while handing out flyers with information on the economy and “draconian legislation” that students “will open their eyes to what’s going on.”

The Occupy protesters claim the main reason they focus on Wall Street and not Washington D.C. is because the money from big business, private banks and the “1 percent” is the root of political and economic problems America faces.

“What we’ve morphed into is not what our founding fathers intended it to be,” Kessans said.
Kessans, who owns a small business, said it’s harder now than it has ever been to own a private business.

“As a business owner, it’s hard to establish yourself because of the taxes on top of taxes,” Kessans said.
As a veteran, Kessans represents a growing number of disenfranchised military veterans who have returned home to see the economic chaos on home soil as result of foreign wars.

“People in the military are the most bitter because they find out they were used for war profits,” Kessans said.

Josh Neace, a student who attended the rally, said he supports the movement.

“Our government has been bribed by military contractors and private banks to do their bidding,” Neace said.
Kessans said she hopes Occupy NKU can be made into an official campus group. She plans to register with the university Dec. 1. English professor Chris Wilkey agreed to be the group’s advisor.

For more information on the group, visit the Occupy NKU website at facebook.com/occupynku.