After public remarks from state and local senators and congressmen, and from the president of Griffin Industries and the hall’s namesake, Robert Griffin, President Votruba and other notable groups cut cable cords instead of ribbons in front of the $53 million home of the college of informatics.

“What we’re going to talk about today is not only the celebration of a facility, but a facility that’s an instrument to accomplish very important things on behalf of our students and on behalf of this region,” Votruba said at the opening ceremony.

The facility, which has hosted classes since August, features 47 smart spaces and over 550 student-accessible computers inside. Additionally, Griffin Hall includes a virtualization lab and a convergence newsroom. It houses four technology-enhanced conference rooms, a media control room, a large-performance studio and a digitorium.

The celebration and dedication began in the Student Union Ballroom, where Votruba described the development of Griffin Hall from its earliest stages in 2004. According to Votruba, Provost Gail Wells brought the idea of a rapidly changing and uncertain future of the digital world to him, which prompted Votruba and NKU to respond.

By combining the departments of communication, computer science, business informatics and applied informatics in one building, the university was able to create a home for the college of informatics, one of only a handful of such facilities in the country. Informatics, according to NKU’s College of Informatics’ webpage, “is all around us, in the ways we live, work and play” and “unites the disciplines that deal first and foremost with information.”

“It is where the science and technology that handle information, meet the human arts and psychology of delivering it, and brings them together under a single theory of applied technology,” according to the informatics webpage.

Robert Griffin said that after a meeting with Votruba discussing the $6-million donation that the family would end up providing for the building, he understood the “magnitude of impact the word ‘informatics’ and Griffin Hall would have on NKU and the Northern Kentucky area in general.”

Support for Griffin Hall from Kentucky legislators has played a big role in higher education reform, according to Votruba. NKU received funding of $35.5 million to contribute to the construction of Griffin Hall.

Congressman Geoff Davis, who worked hard to fund Griffin Hall, said he was proud to represent the university because NKU and Votruba see what others don’t see in a rapidly changing, technologically dominated world.

Griffin Hall is designed to be more earth-friendly than any other building on campus. The building is targeted to achieve Leadership in Energy and Environmental Design (LEED) Silver certification, and it is the university’s first attempt towards certification.

To work towards the certification, Griffin Hall is equipped with efficient lighting and plumbing, and uses local construction materials when possible. It also has a rooftop garden. The “green roof” covers 23 percent of the total roof surface.

Although the roof does not qualify for LEED certification, it does promote sustainability by consuming and reusing rain water rather than diverting runoff to the storm sewer system. The green roof also helps reduce sunlight heat transmission into the spaces below, which helps reduce energy consumption for cooling.
Griffin Hall is also an Intelligent Building System; its main systems are connected to the NKU network, meaning the university can collect data on such things as electric, water and light usage.

The opening ceremony ended in Griffin Hall with light refreshments, authentic drum beats performed by the non-profit organization Bi-Okoto and tours of the state-of-the-art facility. 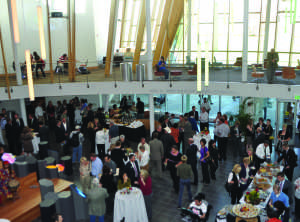