Students were sitting in class, eating their lunch in the Student Union or studying in the library at Northern Kentucky University when suddenly the piercing sound of sirens interrupted their day and put them on alert.

A tornado warning was in effect for campus and students were instructed to move inside and away from windows. But, some students failed to heed the warning.

“Today we had a tornado warning, some people were slow to react,”said Karen Ogburn, associate dean for administration for the Salmon P. Chase College of Law, in an Oct. 26 e-mail to law students about their response to the warning in Nunn Hall. “Students were standing in the glass doorways and looking out the windows, even when the staff tried to get them to stay away from these areas, some returned to see what was going on.”

In an interview with The Northerner, Ogburn said she was seriously concerned for those students’ safety.

“People were running to their cars and that’s probably the worst place you can be,” Ogburn said. “I think people need to take warnings seriously and I don’t think people always do.“

The e-mail warned of the potentially serious consequences. “If a tornado had hit, some people could have been seriously injured by broken glass and debris,” Ogburn wrote.

Overall, though, the person in charge of emergency operations for Northern Kentucky University said he thought everything went well.

“We were pleased at the response,” said Kenneth Ramey, vice president for administration and finance. “The system worked as it was intended to. Nobody had any problem hearing it. It definitely worked as intended.”

Ogburn agreed that it was effective, but said many students were still looking for guidance.

“It went pretty well,” she said. “The problem is people just kind of stand around and really don’t know what to do.”

Northern Kentucky University does not train faculty and staff as a whole on how to deal with emergency situations, Ramey said. Instead, it relies on the short announcements shared during an emergency to instruct everyone on what to do in the circumstance. Individual departments are supposed to have their own emergency plans developed.

Ogburn also said each room on campus is equipped with an emergency action sheet. However, the specific procedures for a tornado warning are not listed on those sheets. 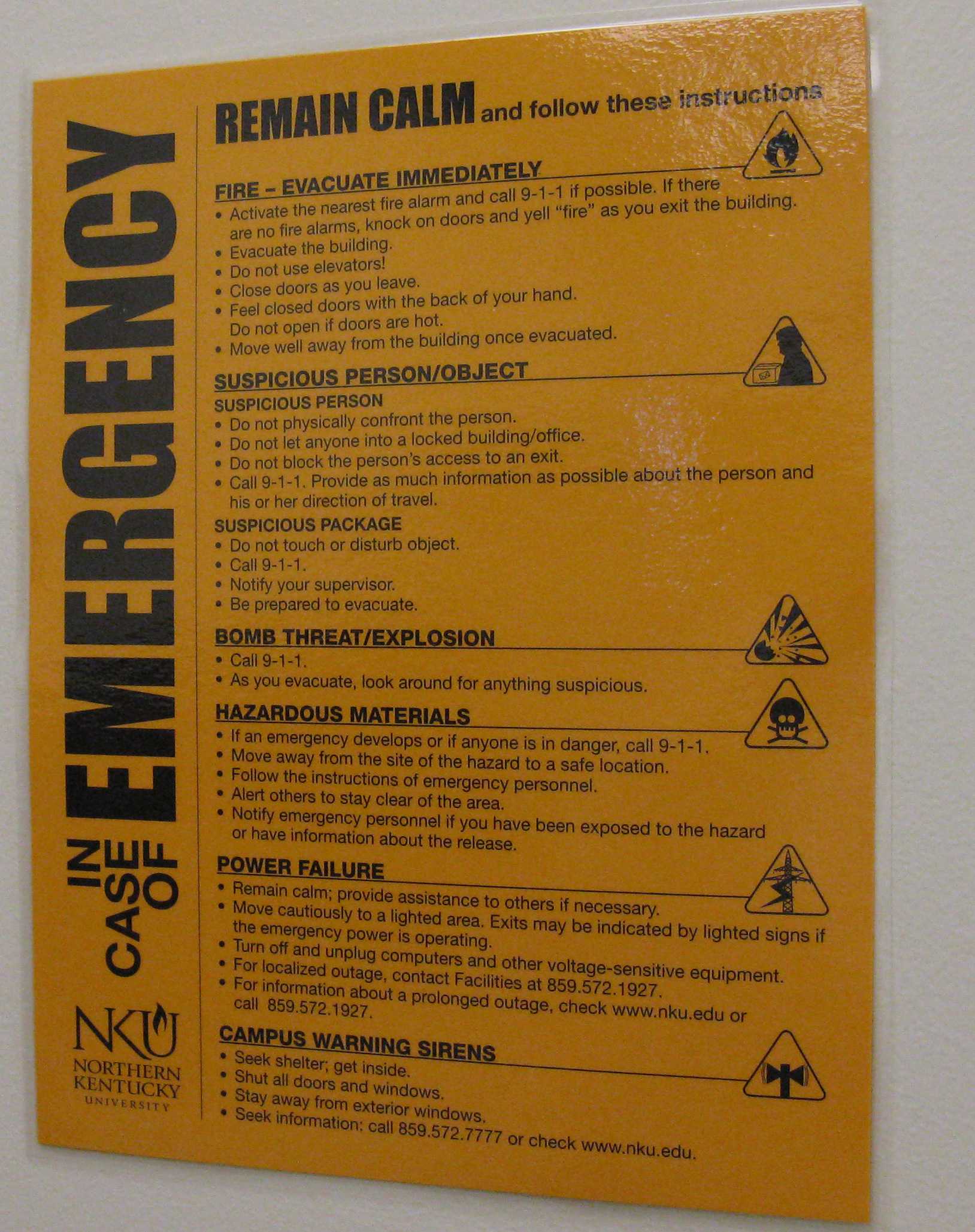 The emergency response signs posted throughout campus do not include specific instructions for a tornado threat, such as the advice to move to the lowest floor of the building. This information was also not communicated through the Norse Alert sirens when a tornado warning impacted the Northern Kentucky University campus on Oct. 28. Photo by Jesse Call.

“I think for the most part that people have been trained that when there is a tornado warning in the area, you get to the lowest area of the building that’s possible,” Ramey said.

Responses to the severe storm differed across the university. Ramey said he was particularly proud of the response of Dean of Students Jeffrey Waple and his staff in the Student Union in ushering students to the first floor tunnel area. In Nunn Hall, Ogburn went floor-by-floor instructing students and staff to do the same. In the Steely Library, students continued their studying on laptops as they sat in the middle of the floor on the ground level.

But, in Founders Hall, where several of the staff of The Northerner were working at the time of the warning, no one was checking the floors or evacuating students.

The Norse Alert internal sirens advised students to move indoors and away from windows, but not to go to the first floor of the building.

Ramey also acknowledged in an internal e-mail that he was unsure as to whether the outdoor audio announcements were sufficient during the emergency, one of the issues that will be considered when university leaders meet to debrief the incident at an upcoming meeting.

Still, in the buildings where students were being directed, several ignored the directions. The university admits there is little they can do about that.

“I watched students walk out of the building of the tornado warning. Everyone makes individual decisions on their safety,” Ramey said.

“Most people listened but then they’d sneak back out,” Ogburn said. “They were going back and looking outside. If they don’t pay attention to you….I don’t have a badge on.”

Both said they did not think students could be disciplined for not complying with the threat instructions. However, university officials are actually empowered to do so.

The NKU Code of Student Rights and Responsibilities says students may be sanctioned for “failure to comply with the directions of university officials acting in the performance of their duties.”

But, failure to comply during an emergency presents graver dangers than university sanctions.

Intense winds and heavy rain slammed into campus on Oct. 26 as part of a huge squall line of severe thunderstorms that moved through the eastern United States. The storm partially ripped the roof off an apartment building in Covington. The storm downed a tree onto a house in Burlington.

A confirmed tornado touched down approximately 30 miles away from campus near Bright, Ind., during the storm outbreak, according to the National Weather Service. The squall line that passed through the area produced an additional six confirmed tornadoes in Ohio.

Bobby Wince, the then-acting police chief in charge of activating the emergency alert system did not respond to requests for comment.