In the past ten days, three more Northern Kentucky University students have harmed themselves on campus and had to be hospitalized. This makes the total count of suicide attempts or other self-harm behavior this semester at seven, including one student who has done so twice. In the 2009-2010 academic year, eight students exhibited self-harm and seven had to be hospital, including one self-inflicted student death.

“Unfortunately, I think we’re going to see more of these,” said Dean of Students Jeffrey Waple, who is tasked with handling self-harm concerns on campus.

Statistically, that appears to be true. According to American Association of Suicidology (AAS), every two hours and seven minutes a youth under the age of 25 takes his or her own life.

Indeed, it appears that the university largely depends on other students to tip them off to a student who may be in danger.

“Students and friends are aware,” Waple said about people who are at risk.

Seventy-seven percent of students said they would turn to their friends during times of emotional distress, according to mtvU. This compares to only 20 percent who would turn to a university’s counseling center, and only six percent that would turn to a resident adviser.

Both of these are great options that NKU offers to its students, according to Waple. But, in most cases, a friend is going to have to encourage another to utilize these resources. 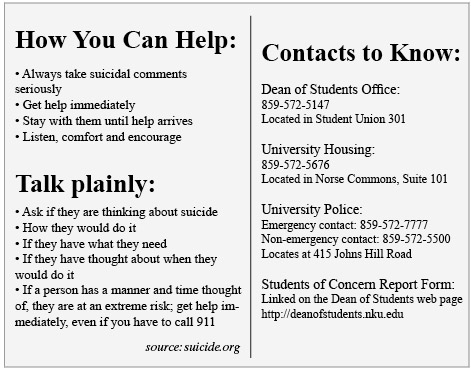 Most of the self-harm behavior in the past two years has happened in university housing.

“Housing staff members are trained to contact a supervisor whenever they learn information that suggests a student may have thoughts of harming themselves,” said Pete Trentacoste, director of university housing. “Any mention of self-harm is investigated by our staff and we collaborate with the office of Health and Counseling, the Dean of Students office and University Police to determine the most appropriate intervention.”

Whenever actual harm is discovered, University Police respond and the person is transported by ambulance to a hospital.

“Often times the student harming themselves, or thinking about it, is looking for help,” Trentacoste said. “Our goal is to intervene quick enough to provide the student the support and assistance they need.”

According to Waple, the self-harm behavior at NKU does not appear to be academically related.

“It’s random; this fall it’s random. These are all pre-midterm things going on. We have talked to the students, it doesn’t have much to do with academics,” he said.
Instead, the issues tend to be more personal, including issues with their families. Statistically, however, stress over academic performance is a major factor in stress among college students which can manifest in self-harm, according to mtvU.

The number of students engaging in this behavior at NKU is consistent with regional universities of the same size, according to Waple.

The university has created a new Students of Concern Committee (SCC) which is designed to take referrals from students and others who may be concerned that a student is going to harm themselves or someone else. This committee will then make efforts to reach out to the student and make a threat assessment. The committee was created as a result of the lessons learned from the 2007 Virginia Tech massacre. So far, however, Waple said the committee has not yet had to meet.

However, NKU has already almost seen the same number of total self-harm incidents this semester as it did total in the 2009-2010 academic year. How can you tell if your friend is in danger?

If a friend is exhibiting these behaviors and lives in the residence halls, Trentacoste said students should feel free to contact University Housing for assistance. Students can also contact the Dean of Students Office or University Police. Help is directly available for free from NKU’s Health, Counseling and Prevention Services office located in the University Center and can be reached at 859-572-5650.