Hundreds of supporters and students gathered at Northern Kentucky University to hear the top two candidates for U.S. Senate in Kentucky spar on the issues during a live televised debate held in Greaves Hall.

Even before the debate, the otherwise quiet area around Loch Norse was filled with chanting and shouting as groups held signs and cheered for their favorite candidates.

Rand Paul, the Republican candidate, addressed his supporters gathered outside from the back of a fire truck. He brought a child up to hold a large poster appearing to be a plane ticket for President Barack Obama in order to challenge him to come to the Commonwealth to answer for all the policies he has enacted that Paul says hurts Kentuckians.

“We can’t let them say ‘yeah, you got the Tea Party guy and he didn’t win.’ …Let’s’ show them that the Tea Party can help the Republican Party and get a big victory,” he said to his supporters. 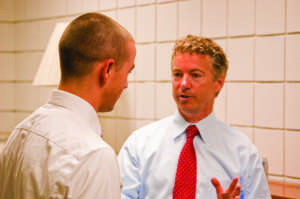 Inside, University President James Votruba welcomed students and guests. He challenged students to learn from the debate and to get active in this midterm election.

“What you’ll see tonight is democracy in action,” Votruba said. “It is democracy that defines our nation and it’s each generation’s responsibility to preserve and protect democracy and that’s what we’re about here this evening.”

The debate featured questions only from a table of reporters and from approved online submissions read by the moderator. Students were not allowed to ask questions of the candidates during the debate, but both candidates provided some students the opportunity to meet with them after the debate and ask direct questions.

Democratic Party candidate Jack Conway, the Attorney General of Kentucky, began the debate with a negative attack on Paul.

“Rand Paul is wrong…Count on me to protect Kentucky. This is a choice between right and wrong,” Conway said.

Paul’s opening remarks focused on how he is an outsider looking to bring Kentucky back to its roots.

“I am not a career politician…Our vision is so much different than their vision,” Paul said.

The candidates debated on several issues, but each had a major theme for the night.

Paul focused on balancing the budget and installing rules and protections to bring the federal deficit down which he said was “out of control.” Conway focused on the federal government’s role in protecting the rights of people and not making “callous” decisions that could hurt Kentuckians on budget cuts.

“As you heard out there tonight, there’s just a fundamental difference between our campaign and Dr. Paul’s,” Conway said to the students after the debate.

But Conway echoed his opening statement to the students about how he thinks Paul is the wrong choice. 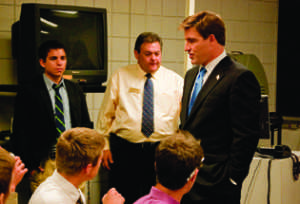 Photo by: Ali Hedges
Attorney General Jack Conway, (D), tells students that recent smear campaigns against him are untrue in a special meeting held after the debate.

However, Conway spent the majority of his time before he took questions addressing the need for students to get out and vote. He cited the story of John Lewis, a politician who helped to lead the civil rights march into Selma, Alabama in 1965 where he was beaten on the bridge going into town.

“You’ve got a lot on the line (in this election),” Conway said. “They’re counting on (college age students) not voting. I hope you prove them wrong.”

He added: “I hope you leave here tonight and don’t (just) have a piece of pizza and say, ‘oh, I met the Attorney General of Kentucky who might be the next United States Senator.’ We’re in a dead heat…I need you to leave here tonight and think of five of your friends who otherwise wouldn’t vote. I need to drive them to the polls. I don’t care who they vote for; make certain they vote. If you get them there, they’ll do the right thing.”

Students asked Conway questions on various issues that were not addressed in the televised debate including immigration policy, supporting small business, campaign finance reform, and cyberbullying.

Students can still vote online at http://ivote.nku.edu/. The actual election will be held on Nov. 2.