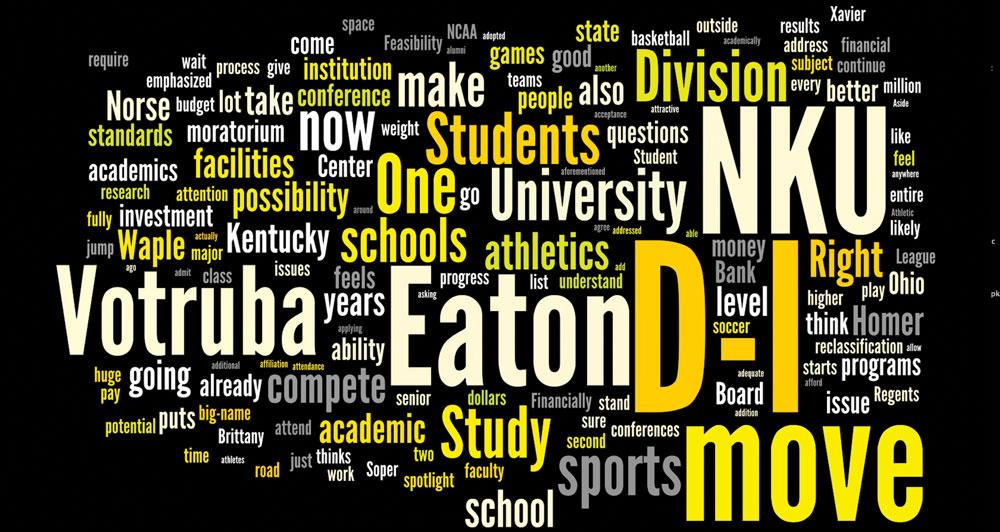 Students, Norse sports fans and faculty are going to have wait a little longer for Northern Kentucky University to go Division I.

It’s going to be a long road for the Division II school to make the jump, and not all of it is under its control. Forced to wait

The moratorium refers to the proposal adopted under emergency authority by the NCAA Division I Board of Directors that, starting Aug. 9, 2007, puts a four-year halt on any school wishing to begin the provisional or reclassification process as a D-I institution.

‘They enacted the moratorium because they had too many schools applying to be Division I,’ Eaton said. ‘And those schools were putting all of their money into their basketball programs and treating the rest of their sports like second and third-class citizens. We have to make sure all of our programs are supported equally.’

Aside from waiting two more years before it can start the process, NKU has other issues to address before it puts all of its eggs in the D-I basket. One of them is a ‘feasibility study,’ which looks at how good the possibility of the move is, and whether it’s one NKU can, and should, make.

Outsourcing the study is Eaton, who is now looking at bids from outside research groups to conduct the study. But this isn’t the first time a D-I study has been done.

‘Four or five years ago we hired an outside consultant to research the potential for us to go D-I,’ said NKU President James Votruba. ‘The results showed we had two sets of challenges. One was having the proper facilities. The second was our operating budget being sufficient enough.”

With the addition of the Bank of Kentucky Center, the Student Union and the ongoing construction of the soccer complex and Griffin Hall, both Votruba and Eaton expressed confidence that the facilities challenge has been – and will continue to be – met. Dipping into the wallet

‘The biggest thing now is money,’ Eaton said. ‘Financially, we’re not ready to make that move. To do it will take more staffing and scholarship dollars. And given the state of the economy, no one has a good feel for that (the move to D-I).’

To make the financial issue more complicated, NKU will also have to pay a fee once it starts its reclassification.

Votruba also mentioned that if NKU goes D-I, the move would tack an additional $4 million onto its budget every year.

‘If the study shows we can’t afford it, then I’m against it,’ Votruba said.

The potential move will undoubtedly be received with a wave of questions from all corners of the NKU community.

‘It’s a huge investment,’ said Jeff Waple, Dean of Students. ‘Is this the right time to do this with this economic era we’re in? Do we have the capacity to handle the jump in enrollment? Are there better uses for that money? Those are questions people will be asking.

‘Right now we need more class space, more practice space and more faculty.’ While Waple labels himself a ‘fence rider’ on the subject, he does admit that going to D-I can bring a lot of good to the university.

‘It will give us a chance to compete at the highest level,’ Waple said. ‘It would give us exposure, and student athletes an incredible experience. To play against UC, Xavier, Ohio State, the big-name schools ‘hellip; that’s what you dream about.’ Issues on the home front

With a move to D-I and playing big schools like Ohio State and Xavier, the university has another issue to address – getting people to actually go to the games. It’s a growing problem that has plagued Norse sports for some years now.

‘I would be more inclined to attend games if we were Division I,’ said Brittany Soper, a senior Marketing major at NKU. But Eaton feels as though attendance at games is already seeing a steady increase.

‘We had just over 200 students attend a soccer game recently,’ Eaton said. He went on to say that the Bank of Kentucky Center is one of the top 50 facilities in the country, and thinks students will be eager to fill the seats when the Norse play some of the aforementioned big-name schools. And despite the huge financial investment Waple stressed, it and the positives that could come from the move are only one part of a larger list of matters to be addressed. The NCAA will be making known to every D-I prospect in the near future what it requires for acceptance into the division.

‘They are likely to require more sports, and will definitely require a conference affiliation,’ Eaton said. He said he has a short list of possible conferences NKU could join.

While a move to D-I means a lot for athletics, Eaton emphasized the weight it carries on the institution as a whole.

‘It’s a total institutional decision,’ Eaton said. ‘It’s not just athletics.’ Votruba further emphasized the weight a D-I move would have on the entire university.

‘If it enhances the entire institution, then the move makes sense,’ Votruba said. ‘But I won’t undermine our academic programs and services to do that. We have to make sure we continue to have an adequate investment in academics and degree planning.’

Not only does a move to D-1 mean more attention for athletics, but it also puts a bigger spotlight on the academic standards at NKU. And it’s a spotlight Votruba already feels very comfortable being in.

‘The university academic standards have never been higher,’ Votruba said. ‘And we’re attractive to Division I conferences on that basis.’

Even students who don’t watch NKU sports feel the university could stand tall in D-I based solely on academic standards.

‘We don’t get as much credit as we deserve,” Brittany Soper said.’ ‘(A move to D-I) would be better for alumni and people who graduate from here who are on the job hunt.’

Other students see D-I as an image-enhancer.

Sophmore Sam Homer thinks the move will be a boost to NKU. ‘Going Division I will add more credibility and respect to academics and athletics,’ Homer said. Can NKU compete?

While some students and staff at NKU agree that a move to D-I is something the university is already academically prepared for, others are concerned about the ability for the sports teams to compete on a higher level.

‘We have one of the better facilities around (the Bank of Kentucky Center), but I’m worried about the talent, and if we can stand up to other D-I schools,’ said Cliff Thoroughman, a senior electronic media and broadcasting major. But, as Homer said, the ability to compete will be a work in progress.

‘It will take a lot of recruiting,’ Homer said. ‘No school starts winning right off the bat.’ Eaton also seemed on the fence about the ability for Norse sports to compete at the D-I level.

‘We are very competitive both in our conference and at the national level,’ Eaton said. ‘But D-I is a different story.’

When both men’s and women’s head basketball coaches, Nancy Winstel and David Bezold, were contacted about a move to D-I and how they think their teams would fare, they said they could not comment on the subject because, per Eaton’s
ruling, all comments, questions and inquiries must be submitted to him only. What’s to come

When the feasibility study is complete – which Eaton said could take months – Votruba will have to present the results to the Board of Regents.

So the issue has come full circle, and a move to D-I comes back to a matter of dollars and cents.

‘I have to pay attention to the bottom-line,’ Votruba said. ‘If a move to D-I for athletics inadvertently undermines academics, then I won’t allow it.’

But whether it’s a few years from now, or somewhere further down the road, Eaton feels confident that NKU will be able to call itself a D-I school one day.