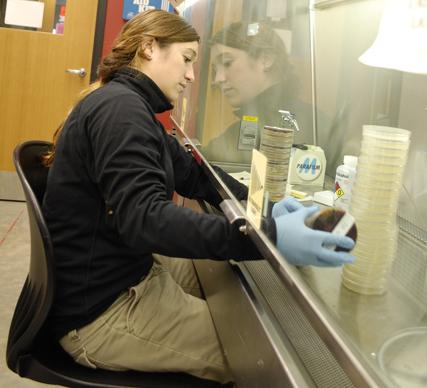 This is the largest amount of funding NKU has received. In 2009, additional faculty members applied to renew the grant, citing the progress made from the original grant. NIH renewed the grant.

The $2.8 million dollars has done more than fund research projects at NKU, it has also helped create more student jobs given NKU students a hands-on experience with projects that many have only read about. With the funds the university hired post-doctoral research fellows who also teach some lab courses at NKU and full-time research technicians, several of whom are NKU grads.

‘Funds are also used to purchase equipment that you might see at a large research intensive school,’ said Mark Bardgett, Psychological Science Professor at NKU. ‘Having such equipment here allows faculty and students to perform research on state-of-the-art devices, which enables such research to keep pace with that being done at more prestigious schools, and allows students to use equipment and perform procedures that most undergraduates in most universities only hear about.’

The University has been receiving funds from the NIH through the Kentucky Idea Network for Biomedical Research Excellence or KY-INBRE. The KY-INBRE program is responsible for the disbersement of NIH funds.

Barton deals with microbes that grow in extreme environments such as Antarctica. Her research helps scientists understand how bacteria becomes resistant to certain medicines. Schulthesis focuses on characterizing how the gene that causes Parkinson’s disease works in cells.

Due to NKU students having this unique experience at the University’s labs,’ ’employers are more likely to hire them, there are many former students who are employed in research labs at the University of Cincinnati and Children’s Hospital in part because of their experience with such equipment and techniques.,’ Bardgett said.

Students at NKU engage in research that other students at larger universities are not permitted to participate in. ‘Therefore, they graduate with unique experiences and enviable resumes that make them much more attractive to graduate schools, professional schools and employers,’ Bardgett said.

Which may be the story of Jordan Wagge, who participated in Bardgett’s behavioral neuroscience research lab a few years ago Wagge just recieved her Ph.D. in cognitive psychology and is now a tenure-track faculty member at Avila College outside Kansas City. ‘I’m sure Jordan’s success is a testament to her alone, but I’d like to think that her work on KY-INBRE funded research inspired her to continue performing research and helped to get (her) into grad school and stay there,’ Bardgett said. ‘Since Kentucky ranks low in the number of graduate degrees per population, programs like KY-INBRE should help inspire even more students to continue their studies into graduate school and equip them with the experience and confidence that they need to succeed there.’