Cover Story: The ‘doctor’ is in 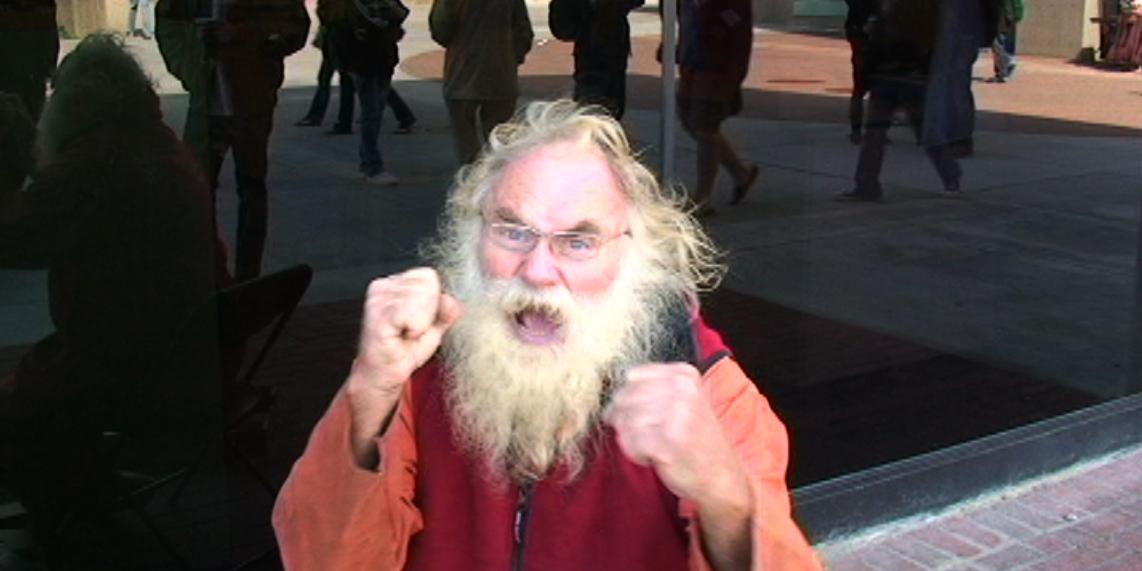 The atmosphere bottled by Northern Kentucky University’s Student Union and University Center typically echoes only of the subtle sounds of daily campus interactions peppered with the occasional excited banter among friends meeting up for social exchange.

A casual stroll across the quad to Starbucks for a cafe au lait will usually progress with little disruption, but is sometimes met with a circular crowd of spectators gathering around a single voice whose intensity rises in direct correlation with the size of its audience.

For more than a week, the students, faculty and staff of NKU have experienced the pleasure, or discontent, of interacting with the man who goes by Dr. W.A.S. – a 68-year-old activist and self-proclaimed futurologist with much to say about war, government, the environment and the university itself.

‘Speak up, or sign up,’ he often shouts with his makeshift props in the backdrop, implying that students cannot be lukewarm about the war in progress.

‘We made a big fundamental mistake going to war in Iraq,’ said Dr. W.A.S., who uses his visual aids as a means of attracting an audience.

‘I’m so sick of war,’ he said. According to the activist, he was in the 478th engineer battalion in the Army during Vietnam, though he never fought. ‘It’s your war – you’d better speak up.’

Dr. W.A.S. also said Johnny Bench and Pete Rose were in his battalion, and that he’d lost several friends to the Vietnam war, which he feels bore similarities to current conflict in its waste of American resources.

‘He was sort of right about the war,’ said Justin Bernard, an undeclared freshman. ‘It really was a stupid thing to go to war with a country where people blow themselves up every day – where they really don’t care about dying — He is sort of correct about that aspect.’

A Doctor of Imagination

Born Gerald Davidson, and later legally changing his full name to Wizard of I, the 1959 graduate of Newport Catholic High School has been shouting into causes he believes in for more years than he can readily quantify.

The acronym in the Dr. W.A.S. moniker stands for Water, Air, Soil, alluding to a group he said he tried to get incorporated with the help of Cincinnati-based attorney David Altman, known for his work in environmental law.

His green activism has included the protesting of the Fernald site, which, according to the Web site for the Fernald Closure Project, produced high-quality uranium metal products for the United States’ weapons production program during the Cold War.

The Web site describes the end of the lengthy, quiet portion of Fernald’s production era, when the Department of Energy reported that ‘nearly 300 pounds of enriched uranium oxide had been released to the environment,’ contaminating three off-property wells.

‘I was the guy that spilled the beans on that one,’ he said, adding that he got students from NKU, Xavier, and University of Cincinnati to tag along for protests.

Dr. W.A.S. has some specific ideas for improving the environment, such as the constructing enclosed bicycle-only highways, and offering high school students a generous allowance for riding their bikes to school to keep buses off the road.

‘I’m a doctor of imagination,’ he said with a laugh.

‘He wants expressways you can ride your bike on, so you can go from Kentucky to California on your bike,’ Bernard said. ‘Which is a little out there, but you know.’

The Art of Defensive Boxing

Dr. W.A.S. also speaks out against illegal immigrants, and can be heard shouting what spectators often interpret as racist speech. He said he’s not a racist, but feels terrorism will one day become a serious domestic problem, creating a dangerous atmosphere for Muslims. He also made comments offending blacks.

‘The reason he said that I would be fine is because I’m standing right there in front of his face,’ said Lamar Hill, a freshman at NKU. ‘I’ll bet you if I wasn’t there, or any other black person wasn’t there, he would be talking about just white people alone, and that Mexicans, black people, any (ethnicity) other than white should be kicked out of the United States because we’re taking his jobs, or their jobs. That’s stupid as hell, that pisses me off.’

His list of qualms with the government is extensive, and entails a massive re-tooling and a boxing match.

‘I’d like to challenge President Obama to a boxing match,’ he said. ‘I’d kick his ass. I’d suck him in, ‘cuz I’m a defensive boxer.’ ‘

Dr. W.A.S., who, with only a brief stint as a geology major at the University of Kentucky in 1957 under his belt, is not actually a doctor, also tells students of his ideas to counteract illegal immigration.

‘He’s real big on the illegal Mexicans and stuff. He always says we need to have a bounty on them, which is a little messed up,’ said Bernard, who’s tuned into the activist’s gospel several times already. ‘He said ‘$500 a head, ten a day.’ He says ‘don’t get too greedy.’ That’s what’s messed up.’

In addition to speaking out on a wide array of hot topics, Dr. W.A.S. said he wants to help improve NKU. He’d like to see NKU open its doors 24 hours a day, seven days a week, and also feels the university would benefit from a name change – he sees big things in store for NKU, and thinks a more distinctive name will have more impact when big things come.

‘I’m addicted to NKU,’ he said. ‘Totally dedicated. I’ll do anything for the students and faculty.’

Dr. W.A.S. said he feels that most students love his presence on campus, but not all students have taken his words so positively.

‘I just don’t believe anything he says,’ said Hill, who studies pre-med. ‘When I look at him, he’s just fake to me.’

Though Dr. W.A.S. hasn’t been seen at NKU in at least three years, this is not his first time on campus.

‘He’s been coming here for the past 20 years,’ said Bill Lamb, who served as NKU’s dean of students until 2001, and now is the employer relations coordinator of the Career Development Center. Lamb said the message he brings always has a common through-line.

‘Everything he’s spoken about has had a common theme of pro-environment or anti-big government,’ Lamb said.

Dr. W.A.S. said a part of what drives him to do the work he does is that he fears the path our country is currently taking will lead America into being a semi-closed state.

‘We’re in a house of glass,’ he said. ‘We have such a wonderful, open society, but the doors are slowly closing.’