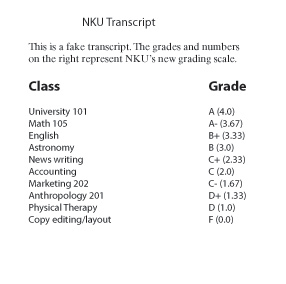 Love it or hate it, it’s here to stay.

No, we’re not talking about rock n’ roll – we’re talking about Northern Kentucky University’s new grading system. If you’re an undergrad and plan to stick around at least this semester, prepare to change your GPA calculations. In 2007, NKU’s Faculty Senate proposed the new grading scale – a new plus/minus grading scale this fall. This means that instead of the old grading system (A, B, C, D, F), professors will have to add pluses and minuses to a student’s overall grade.

‘I think it’s ridiculous. I think that it should go back to the old system. I feel like we’re back in high school.’ said Nicole Rindsberg, senior social work major.

The scale will make it harder for students to earn 4.0 grade-point-averages. Instead, many students will find themselves receiving A minuses, worth 3.67 gradepoints. However, a student who earns a high B will receive 3.33 grade-points per hour, instead of just three. Regardless of where your grades fall on the line between C, B, or A , the new number will be more precise than rounding up or down to two, three or four points.

Studies conducted by other universities that use this system show there is no overall effect on students’ GPAs.

Geography coordinator John Metz said it is a good move.

‘It will allow a person’s grade point average to more closely reflect the quality of the work that he or she has done. There is a big difference between someone who has 79.6 percent of the points and someone with 88.5 percent, so that will be differentiated,’ he said.

There has been some controversy between NKU faculty about whether or not this grade scale adoption is beneficial.

‘I didn’t vote for it,’ said Dr. Penny Summers’ of the journalism department. Her main concern with the new grading scale was for’ hopeful graduate students.

‘While undergraduate GPA is only one part of the admissions process for graduate schools, GRE and letters are also very important. It could put A minus or B plus students at a slight disadvantage in competing for graduate school positions with those not on the plus/minus,’ she said.

Some faculty are hoping the grading scale will make students more aware of their classwork and aim to do better.

‘I hope that the new grading scale will also create a sense of importance about all assignments, as every single graded assignment will seemingly matter more to students, to avoid minuses, and earn pluses, for example,’ said Cady Short-Thompson, chair of the communication department.

While some faculty, like Dr. Summers, oppose the new system, it seems the majority of NKU faculty’ think it is a good idea.

‘Even though it means more rigidity in terms of absolute numbers, most faculty I have heard from are in favor of it,’ said Debra Pearce, chair of the biology department. ‘There can be a huge difference in someone who scores a 70 versus a 79, which is not reflected in the past system.’

Doctor James Ramage agrees. ‘I have been assigning plus and minus letter grades for exams, research papers, and other assignments since I started teaching over thirty years ago,’ he said. ‘I’m pleased to now have the opportunity in determining the grades of the students in my classes. The new system is a more accurate reflection of the student’s performance and that, I think, is fair to every student in the class.’

Still, other professors seem to be uncomfortable talking about the new grade system at all, or have not formed an opinion, which could be an indicator of possible ramifications of it. It would seem that NKU faculty need just as much time as the student body to adjust to the new grading scale.

The new system is also a delicate topic among students. ‘I think in the long run it will hurt more than help,’ business administration graduate student Matt Brown said. People’s averages will drop, making them look bad when they apply for grad school or the work-force. The old system was fine – it should have stayed that way.’