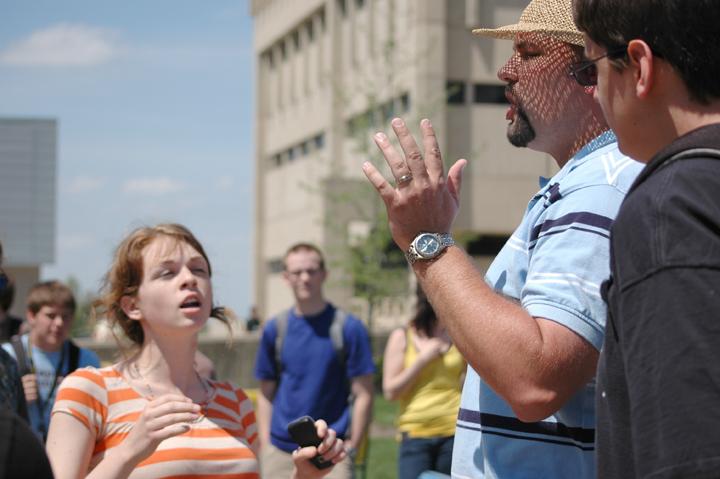 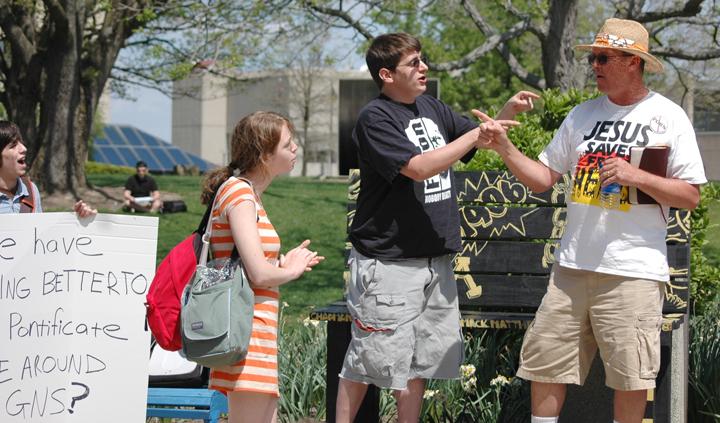 A loud voice permeates through the air, ‘All sinners go to hell,’ followed by a raucous shrill from many voices responding to the powerful statement.

A young man standing among the crowd stands and hollers back, ‘There isn’t a hell.’ The man with the righteous voice standing in front of the crowd of around 40 responds,

‘Geology,’ the young man fires back.

John McGlone, with a round, brown brim hat, white t-shirt with the words ‘Jesus Saves from Hell’ scrawled across the front, is the man standing in front of the crowd. An evangelical preacher, McGlone, along with fellow preacher, Kerrigan Shelly, are on a trip visiting several colleges within the Midwest region.

On April 27, a very warm, sun filled, cloudless day, Northern Kentucky University was chosen to hear the words of the duo.

Preachers like’ Shelly and McGlone are common occurences on college campuses, like Brother Rick who was a visitor on NKU’s campus in the fall 2008 semester.

‘It’s the center of learning, it’s the gateway to the world, our future leadership comes out of these campuses, business leadership, political, philosophical, religious,’ McGlone said, explaining why the visit college campuses to preach.

Shelly added to McGlone’s explanation, ‘And also one of the reasons we come here, too, is because according to statistics, what most people believe’ once they get out of college, they are going to believe the rest of their lives.’

‘I’ve only been witnessing or telling people about Christ for about four or five years,’ McGlone said, ‘ I’ve only joined Kerrigan with the Pinpoint ministry a little over a year now.’

McGlone hasn’t always been a preacher.

‘I am retired Navy and I worked in the postal service and resigned from there to do this,’ McGlone said.

Shelly, who also devotes his full time to preaching, didn’t grow up Christian.

‘I just really got a revelation of what hell is like,’ Shelly said, describing why he decided to preach.

The pair said that they preach all year, but try to stay close to their locale, which is Kentucky. ‘Usually we just go to a campus for a day and then go back home, then go back to different campus, visiting three or four campuses a week,’ Shelly said. In a typical day, the pair will get to campus and decide who preaches first and then switch back and forth.

‘We’ll lift up our voice and just start preaching the Bible,’ Shelly said.

Shelly and McGlone get many different types of onlookers.

‘People will gather around, some mock, some listen, some question, some yell and scream and cuss, some spit on you and some threaten you with violence,’ Shelly said,

‘You also get people who are listening.’

‘We look at this crowd of, maybe of a hundred people, and most of them are mocking and just kind of being ridiculous with their assumptions and presumptions,’ McGlone added. Shelly mentions that after preaching for four or five years, violence is a rare occurrence.

Stating that for preaching in the open air about 1000 times, violence has only happened seven or eight times.

‘It does happen, but is a rare occurrence,’ Shelly said, ‘Recently, we were in Daytona Beach, and a friend of ours…and he was preaching. He is probably 5 for 8, 120 pounds. This guy who was about six and a half foot tall, 300 lbs, he wasn’t drunk, started pushing him and assaulting him. The cops saw it, the cop was going to tazer the guy, but he stopped and the guy got arrested for assault.’

‘Don’t we have something better to do than pontificate and wave around signs?’ Firing many questions to the preachers, though most’ didn’t get their questions answered.

As the crowd continued to accumulate, a group of students began singing songs, such as ‘Row, Row, Row your boat’ to interrupt the preaching duo.

Most students cussed, or interrupted, but a young woman stepped from the crowd alongside the preachers and said that she grew up in a Christian home, and it bothered her that students were being so rude. ‘